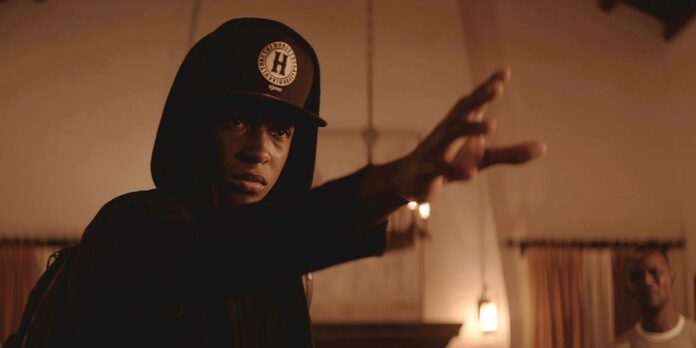 THE STORY – After his mother’s death, a young street magician (Jacob Latimore) turns to dealing drugs at parties to support his little sister. When she is kidnapped by his supplier, he uses his sleight of hand and keen intelligence to find her.

​In the aftermath of his mother’s death, Bo (Jacob Latimore) forgoes an engineering scholarship in order to stay home and provide for his young sister. Left without many options, he deals drugs to college students and performs street magic in order to stay afloat. His magic tricks, of course, are no trick. Bo has augmented his body with Iron Man-esque modifications that allow him to manipulate metal. But when Bo finds himself on the wrong side of a powerful drug dealer (Dulé Hill), he must use his powers to save both his and his sister’s lives.

Before I offer any criticism of the film, it should be noted that the fact that “Sleight” exists at all is an impressive achievement. Writer/Director J.D. Dillard rose from a receptionist position at Bad Robot to direct a high-concept feature film on a $250,000 budget. The film also deserves praise for introducing an African American protagonist to a genre largely populated by chiseled white men named Chris. Bo’s superhero also opens promising doors for a sequel, should Dillard choose to revisit the character a second time around.

That being said, although “Sleight” promises an unorthodox take on the superhero genre, one lacking explosions, supervillains, and end-of-the-world stakes, it offers clichés of a different sort. There may not be any magical sky beams, but Sleight generally feels paint-by-numbers in its plotting. Everything from the spunky little sister, Bo’s underdeveloped romantic relationship trajectory, and the general idea of  ‘good guy getting too deep into crime’ all feel decidedly ‘been there, done that.’ A character-driven superhero film is an interesting concept, but Dillard appears so determined to avoid superheroism, that Bo’s ‘superpowers’ are largely ignored throughout most of the film. Without them, Sleight is merely yet another tale about attempting to break out from a toxic lifestyle. And not only does the plot seem well-trod, the film never manages to achieve the levels of white-knuckle tension that could distract from the derivative nature of the plot. The film seems unsure where to go after the second act, and ultimately shuffles about, eventually limping to a conclusion that proves mildly compelling, but ultimately anticlimactic.

Bo is a compelling protagonist, largely due to Latimore’s nuanced, emotional performance, but none of the other characters around him leave much of a lasting impression. Bo’s love interest, Holly (Seychelle Gabriel) is thinly scripted, while the actors portraying the villainous drug dealers rarely convincingly convey the menace necessary to compensate for the depth they lack on the page. Hill, particularly, reads amateurishly.

“Sleight” also succumbs to certain first-time feature mistakes, such as introducing too many side characters and unnecessary subplots. A vengeful rival drug dealer and a friendly nightclub owner are heavily built up, only to see their storylines peter out without adding much to the plot.  The dialogue generally lacks subtext, instead offering exposition, or directly spelling out characters’ motivations.

If Dillard’s writing proves flawed, his direction is more impressive. Certain sequences, particularly one moment involving a meat cleaver, prove legitimately unsettling in their execution. Together, Dillard and cinematographer, Ed Wu, craft striking, moody images that often mask the film’s low budget. Visual effects are used sparingly, but when they are, the results are convincing.

In short, “Sleight” deserves praise for attempting to present a different take on the superhero genre, even if it succumbs to cliché. Given its budgetary constraints, many of the film’s flaws are understandable. Given time and refinement, Dillard could become a formidable genre film director. But for now, “Sleight” regrettably does not boast a strong enough screenplay or cast to live up to its promising concept.