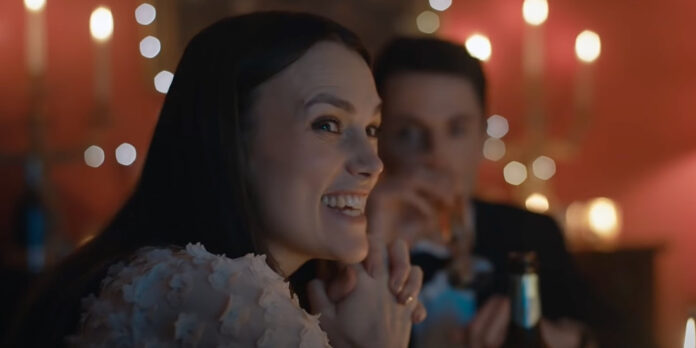 THE STORY – A couple invite their closest friends to join their family for Christmas dinner at their idyllic home in the English countryside. As the group comes together, it feels like old times — but behind all of the laughter and merriment, something isn’t quite right. The world outside is facing impending doom, and no amount of gifts, games or wine can make mankind’s imminent destruction go away. Surviving the holidays just got a lot more complicated.

We’ve certainly seen our fair share of dysfunctional family get-togethers in Christmas comedies over the years – “Home Alone,” “National Lampoon’s Christmas Vacation,” “Christmas with the Kranks,” and the list goes on and on and on. Frequently, each film starts with a clash of many contrasting personalities, making the upcoming Yuletide festivities feel downright apocalyptic. But, in the end, everyone ultimately comes together and sets aside their differences, taking part in a traditional Christmas celebration where all are overcome by the spirit of the season. Writer-director Camille Griffin’s “Silent Night” starts similar to these stories, but audiences will soon find that it dramatically deviates from this familiar formula. In this film, the coming together of numerous idiosyncratic individuals doesn’t just feel like the end of the world – it is the end of the world.

Hosting yet another holiday gathering for her friends and family, Nell (Keira Knightley) is as nervous as ever, wanting to ensure that all the meals are made, and all the presents are perfect. Assisting her in these endeavors are her handsome husband Simon (Matthew Goode), and her sons Art (Roman Griffin Davis), Thomas, and Hardy (Gilby and Hardy Griffin Davis), who strain to give their home that “festive” feel. First to arrive is Nell’s snide sister Sandra (Annabelle Wallis), her husband Tony (Rufus Jones), and daughter Kitty (Davida McKenzie), followed by their other sister, the boisterous Bella (Lucy Punch), and her girlfriend Alex (Kirby Howell-Baptiste). And that’s not nearly all, as long-time schoolfriend James (Sope Dirisu) is on his way as well, with girlfriend Sophie (Lily-Rose Depp) in tow, who has quite a secret to share. When everyone settles in, the usual petty squabbling starts, but these superficial spats can’t hold a candle to the real chaos that’s about to occur since today is likely their – and everyone else’s – last day on Earth.

The “hows” and “whys” of this impending global catastrophe are best left unspoiled. Still, it’s safe to say that how Griffin so slyly combines a stereotypical Christmas comedy with a disaster drama is nothing short of genius, focusing on the end of the world’s effects on individuals on an intimate level, differentiating from films in the latter category that take a broader look at these crises and prioritize spectacle over character (while also subverting our expectations of a “comfy” Christmas setting). Griffin’s dialogue at the start is devilishly biting, authentically portraying tense familial ties with caustic comedy. This tone is sustained even when her cast begins conversing about far more somber subjects, with the script never losing its withering wit. Some may find the twists and turns to be a little too tragic, as Griffin has no problem making use of the morbid and macabre, but those who can embrace her sinister sense of humor will find themselves in for a raucous ride.

Part of “Silent Night’s” appeal (for those who may be otherwise apprehensive of its potentially “offensive” aspects) is its colorful collection of characters who, despite their more questionable qualities, always charm and command our attention, feeling like fully fleshed out personalities that we may even find in our own family. However, while Griffin provides her cast with the outlines of these prickly parts, it’s the actors’ job to give depth and dimension to these strange scoundrels. Thankfully, there isn’t a weak link in the entire enthralling ensemble, with each character being equal parts aggravating and amusing. It’s a hard line to walk – being both occasionally realistically revolting while not completely turning off crowds – but Griffin is blessed with stars who strike the perfect balance, honoring both the horrifying and heartfelt features of families. Roman Griffin Davis is the standout, proving that “Jojo Rabbit” was no fluke, with a playful but also poignant performance as a child distressed by the idea of the imminent widespread death that prior generations have generated, but Wallis and Punch are certainly no slouches either. The former proves she’s more than a mere “scream queen” as the spoiled and hilariously snippy Sandra, while Punch is a droll delight as sister Bella, whose candid commentary is comedy gold.

The film’s final shot may inspire some less-than-ideal interpretations from those with a particular political point-of-view. The relentless nihilism might not rope in all audiences. Still, viewers with a very specific taste will have an absolute ball with Camille Griffin’s bleak-but-brilliant musings in this movie, as she tackles a torrent of weighty topics all in the confines of one Christmas celebration. Throw in some thought-provoking themes about the wealthy’s ability to shield themselves from suffering and younger generations bearing the brunt of mistakes they didn’t make, alongside truly top-notch acting from an all-star ensemble, and “Silent Night” becomes a bitter but beguiling gem of a film. It may not be a cozy new Christmas classic you can share with the whole family, but those who don’t mind pitch-black dark humor will have one hell of a time.