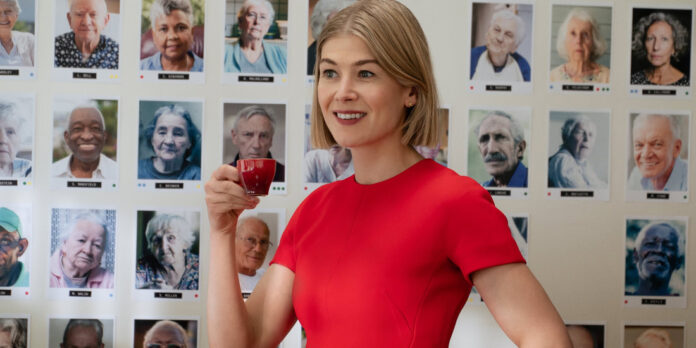 ​​​​​We are living in a society where the strong survive only by preying on the weak. Where playing fair and by the rules is designed to keep poor people poor and rich people rich. In her opening voiceover, Marla Grayson (Rosamund Pike) tells the audience that there are two types of people in this world: people who take and those getting took. Predators and prey. Lions and lambs. “I am not a lamb,” she says. “I am a fucking lioness.” And that is how the best fictional character Rosamund Pike has had the opportunity to play since “Gone Girl” is introduced to us.

Filmmaker J Blakeson’s (“The Disappearance of Alice Creed”) latest film, “I Care A Lot,” tells a story of how legal guardians are out to get us and how even the powerful are powerless to stop it. Marla Grayson is one such legal guardian who is fearless, bold, and ambitious in her quest for wealth. With her partner’s help (Eiza González), she exploits the law by forcing the elderly into care facilities even though they are perfectly fine and are in no need of assisted help. She then seizes their assets for herself, thus pushing her closer towards her goals of financial wealth. She claims to the judges in court that she really cares a lot about the people coming under her control when that couldn’t be further away from the truth. When she feels she has found the perfect elderly woman with no friends or family (Dianne Wiest) to put into the system, she crosses a line with a secretive crime boss (Peter Dinklage), consequently plunging her into a dangerous cat-and-mouse game of will and determination against an opponent as calculated and resilient as she is.

I really cared a lot about “I Care A Lot” despite the fact that the film makes it clear that Marla is not a good person. She may be our protagonist but she is who she says she is, right down to her very core. She believes that people are weak, compliant, and scared. And if you want to make it in this country, you need to take advantage of that. Watching her go toe-to-toe in verbal sparring matches with slick lawyers (Chris Messina and Pike share a sparkling negotiation scene together with absolutely dynamite dialogue) and forcibly intimidating criminals is a fun piece of entertainment and Pike sinks her teeth into this role in all the best ways. Fans of her work in “Gone Girl” will not be disappointed. Her ability rests in the fact that she makes us care about Marla, even though we shouldn’t. Even if you hate Marla, you have to admire that she is tough and not intimidated by men, even men threatening her life and those she cares about.

J Blakeson’s film takes a fun and campy tone in its first half, giving the actors space to create some memorable, funny moments until things progressively get darker in the second half. Dianne Weist, in particular, has a few eye-winking moments of levity that delivered some big laughs. But the real darkness is brought on by Peter Dinklage’s unknown gangster, a character who likes to keep calm, even when he is seething with rage for Marla and the trouble she is causing him. Dinklage is quite good in the role and the moments he shares with Pike are some of the film’s best, just to see two great actors playing focused and driven characters that come into heated conflict with one another.

As tensions between Marla and her adversary continue to grow and the stakes become higher, Blakeson’s unique crime film finds itself in a tough spot by the end. How do you wrap up a story with unlikeable characters? Someone has to win. But who? And how? It’s clear to the audience that it’s the system that always wins. Still, one last-minute (but necessary) decision by Blakeson in the film’s final moments establishes the film’s morals, even if it left this particular viewer caring a bit less about the movie as a whole. Despite that last-minute blunder, “I Care A Lot” is still a ferociously entertaining crime story with more than a few unexpected turns and a fascinating character in Marla Grayson at its center.