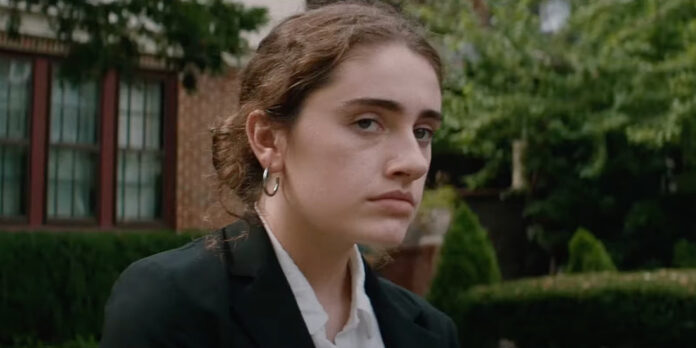 THE STORY – While at a Jewish funeral service with her parents, a college student has an awkward encounter with her sugar daddy and her ex-girlfriend.

Everyone has been to an awkward family gathering. The type where someone shows up who you don’t want to talk to, so you’re even more on edge than usual when assuring your self-described favorite aunt that, despite all evidence to the contrary, you actually are living a healthy life; explaining your intended career path to your second cousin once removed for the fifth time; and begging your mother to please not tell the horribly embarrassing childhood story about you while you stand there and listen to it. Emma Seligman’s “Shiva Baby” puts you right smack dab in the middle of one of those awkward family functions and turns it into a pressure cooker, steadily building up the tension until everything explodes at the worst possible moment. It is a tremendous debut, one that announces Seligman and her star, Rachel Sennott, as ones to watch in the world of cinema.

Sennott plays Danielle, a directionless, almost-college-graduate whom we meet having vocal sex with her sugar daddy Max (Danny Deferrari). After that, she joins her parents (Polly Draper and Fred Melamed) at a shiva – a Jewish gathering for the close family of someone who has recently passed. Also in attendance is Danielle’s best frenemy/ex-girlfriend Maya (Molly Gordon), who is everything that Danielle is not: Calm, cool, collected, and going to law school. And eventually, who else should show up to the shiva but Max, with his shiksa wife (Dianna Agron) and baby in tow. Just like that, the walls that Danielle has built to protect herself from prying distant family members turn into a house of cards, ready to tumble down at any moment.

And tumble they do, in spectacular fashion. Seligman, expanding her short of the same name to a just-barely feature-length, air-tight 77 minutes, shows masterful control over tone and pacing, guiding the audience through the labyrinth of tightly-packed rooms and invasive questions right by Danielle’s side. We are locked into Danielle’s perspective – every shot is either of her or her point-of-view – and it is a very uncomfortable spot to be in. Ariel Marx’s jittery score only heightens that discomfort, a series of plucked strings that calls to mind Klezmer music and traditional horror scores simultaneously, which adds a sting to every nitpicky comment from a family member or sideways glance from across the room. The score becomes more present as the film goes on and the tension heightens. Seligman’s style matches it, eventually washing full scenes in a red light that feels like it is coming directly from Danielle even though it is shown to be completely diegetic.

Sennott is remarkable, breezing through the early scenes with the annoyed assurance of someone who has been constantly derided by their family for their life choices but knows how to brush off the asides about their weight and evade the personal questions well enough. But as the tide turns, she reveals more and more of Danielle’s inner self, peeling back a new layer with each scene as Danielle struggles to hold her life together while competing forces are tearing her apart. And as those forces are tearing her apart, Seligman has cast a rogue’s gallery of some of the finest character actors around. Melamed and Draper are a match made in heaven as Danielle’s parents, digging into the delicious lines in Seligman’s hyper-quotable screenplay with the kind of relish only a couple of old pros can muster. Agron is a passive-aggressive delight as the unwitting other woman who slowly becomes aware that this strange girl isn’t all she says she is. And Gordon almost walks away with the film as the near-perfect Maya, who starts as a foil for Danielle but becomes something much richer than that.

The fact that these performers have so much to sink their teeth into is a testament to Seligman’s writing. It is awe-inspiring how much she is able to pack in the film’s short running time, giving both Danielle and Maya full character arcs, along with miniature arcs for pretty much every other major supporting character. The characters and situations are incredibly specific in their details, making the film even funnier for anyone raised in a Jewish community. But for those who didn’t, everything is still funny due to the universally hilarious dialogue. A few references may be culturally specific, but everyone knows what an overbearing relative sounds like, and Seligman has dialed her characters in as far as they can go without becoming too much of a cliché. “Shiva Baby” finds the universal in the specific, and that is what makes it such a fun time at the movies.