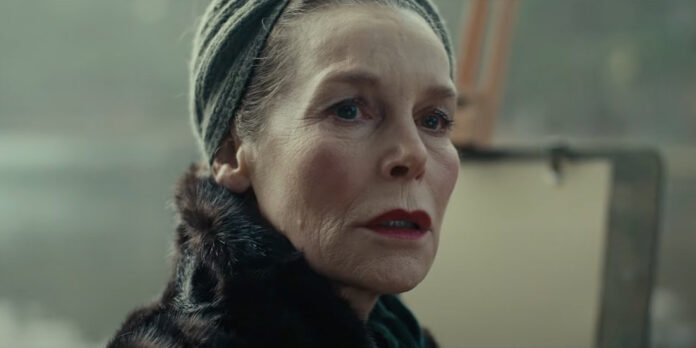 THE STORY – An aging film star retreats to the Scottish countryside with her nurse to recover from surgery. While there, mysterious forces of revenge emerge from the land where witches were burned.
​
THE CAST – Alice Krige, Kota Eberhardt, Malcolm McDowell, Rupert Everett, Jon McCrea, Amy Manson, Jonathan Aris & Daniel Lapaine

​​​​One of the more tiring horror tropes is the continued villainization of witch characters. Even now, films depict women accused of witchcraft to genuinely be the malevolent thing that those who wrongfully hunted them believed them to be. It’s a frustrating way of portraying a sexist, ignorant chapter of human history. That’s what makes “She Will” so refreshing. The new film from director Charlotte Colbert smartly uses spellcasting and dark magic as metaphors for the powers women have that are so often repressed by a patriarchal society.

Veronica Ghent (Alice Krige) is an older film star who hit the height of her success at a very young age in a film starring still-esteemed actor Eric Hathbourne (Malcolm McDowell). With her glory days behind her, she takes to the Scottish Highlands with her young nurse Desi (Kota Eberhardt) to recuperate from a double mastectomy. In this rural environment, she slowly begins to find new and surprising sources of power that just may hold the key to her recovering both physically and mentally from her traumas.

Krige is simply mesmerizing in her central role. What seems to begin as a character type we’ve seen before – the jaded, faded movie star – unveils itself to become something new. Krige is the biggest reason that Veronica doesn’t devolve into cliché. She continually finds new layers to her brittleness and pain. The hardened act she’s putting on is so firmly secured to her personality after years of performing toughness that even she seems to believe it. Krige’s steadfast and assured characterization helps sell this. This unwavering certainty makes the moments that reveal the caring individual that’s been hidden away quite moving and sympathetic. Krige is a pro at playing these types of roles in similar films – she’s excellent in “Gretel & Hansel” and “Silent Hill” – and it’s exactly the type of veteran horror performance that fans of the genre should seek out.

Overall, the film manages a strong unity of tone and aesthetic, with the murky, earthy images aligning well with the return-to-nature aspects of the plot. Colbert shows a confident directorial hand in several effective montages that do a lot to convey some of the more abstract parts of the script. These vagaries do stand out, but Colbert is able to somewhat paper over them with her assured visuals. Where the screenplay shines, however, is in its expositional elements. Veronica’s backstory is interwoven organically into the film through dialogue and context clues. None of it feels abrasive or forced.

Similarly, the screenplay’s themes are explored with appropriate depth while simultaneously never putting too fine a point on things. It’s easy to imagine a version of this film that double-underlines its feminist ideas, therefore undercutting its power. The screenplay trusts the audience to pick up on what it’s hoping to say about the state of gender relations and power imbalances in our modern world.

Unfortunately, the plot itself does get somewhat repetitive once it lands on its ultimate purpose, but “She Will” is engrossing enough that this is mostly forgivable. Anchored by a fantastic lead performance, this revenge tale wisely reimagines stories depicting women who’ve been accused of witchcraft in a way that’s empowering and still haunting.