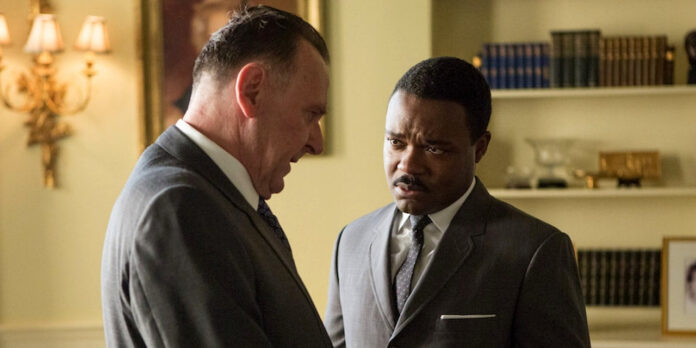 THE STORY – Although the Civil Rights Act of 1964 legally desegregated the South, discrimination was still rampant in certain areas, making it very difficult for blacks to register to vote. In 1965, an Alabama city became the battleground in the fight for suffrage. Despite violent opposition, Dr. Martin Luther King Jr. (David Oyelowo) and his followers pressed forward on an epic march from Selma to Montgomery, and their efforts culminated in President Lyndon Johnson signing the Voting Rights Act of 1965.

​In 1965, three marches were held in Selma, Alabama, to attempt to secure voting rights for African Americans. The bravery of the protestors in the face of the violence they were met with gained national attention, and later that year, the Voting Rights Act was passed. Ava DuVernay’s “Selma” depicts the marches, focusing on Martin Luther King, Jr.’s leadership. When the film was released in 2014, just before the 50th anniversary of the marches, it was praised for DuVernay’s direction and David Oyelowo’s performance as King.

The script, written by Paul Webb but significantly rewritten by DuVernay, does a great job of explaining why political action was necessary. Several measures were being used to ensure that African Americans were not able to register to vote, and without their vote, white political officials weren’t beholden to them in any way, and white juries would rarely seek to punish white men who had harmed African Americans.

“Selma” is the best kind of biopic (if you can even call it that). It’s about Martin Luther King, Jr., yes, but rather than attempting to tell his entire life story, it focuses on a specific moment in his life. It paints a clear portrait of a man who is passionate but civil and principled and refuses to deify him. The film shows King as a three-dimensional man with flaws rather than a saintly symbol of the Civil Rights movement. The screenplay is impressive in its speeches that sound like those given by King. (They were unable to use the real speeches because of copyright.)

Oyelowo is great in the flashier moments of King giving speeches and leading crowds, but he truly excels in the more intimate moments, whether King is speaking to President Johnson, another protestor, or his wife. His performance is the epitome of an interpretation of a historical figure rather than a shallow imitation. He captures King’s charisma and accent but also brings impressive depth to the role.

Oyelowo is at the head of an impressive cast that includes names like Tessa Thompson, André Holland, Tom Wilkinson, Jeremy Strong, and Cuba Gooding Jr. Carmen Ejogo gives a quiet, understated, but powerful performance as Coretta Scott King. Lakeith Stanfield (who has since gone on to make a name for himself) is fantastic as the earnest young protestor Jimmie Lee Jackson. Oprah, in addition to being a producer on the film, portrays Annie Lee Cooper. We see her voting registration get thwarted near the beginning of the film and she’s very moving as a woman wearied by the world she lives in. She truly disappears into her role.

If the film has a downfall, it’s that it can be a little bit hard to follow at times if you’re not already familiar with the material. There are so many characters, all based on real people, and sometimes it’s not entirely clear who they are. The FBI field reports appearing on-screen do help to give context to the changing locations, but it might be helpful to do a little bit of research about the Selma marches before watching if you don’t already know them.

The film is generally believed to be historically accurate, with a couple of exceptions. Some people have an issue with the portrayal of President Johnson as being reluctant to act on voting rights. What’s more concerning is that the film leaves out several prominent Jewish Civil Rights leaders like Rabbi Abraham Joshua Heschel who took part in the marches. With such a large cast, it would have been nice to see them represented.

DuVernay’s direction of “Selma” is masterful, particularly in how she manages to capture the chaos and brutality the protestors endured without the violence ever feeling gratuitous. The bombing of the church that occurs early in the film is particularly effective and jarring while being filmed abstractly enough that it doesn’t feel exploitative. The close-ups on specific characters during the marches do a great job of showing that it’s not just a crowd of nameless people but individuals that the audience has come to care about, making the stakes seem even higher. Bradford Young’s cinematography is also stellar, particularly his use of lighting and contrast.

The film ends with black-and-white footage of the actual march from Selma to Montgomery and seeing it only drives home how timely this movie’s release was. It came out in the same year as the Ferguson protests and it’s impossible not to see how heartbreaking it is that it remains so relevant. The rapper Common portrays James Bevel in the film, one of the movement leaders, and also wrote and performed “Glory” along with John Legend, an anthem that references the Ferguson protests. The song won Best Original Song at the Oscars where the film was otherwise horribly overlooked, aside from a Best Picture nomination. “Selma” is a film that seems to have already faded in the public consciousness, despite its excellent acting and direction and its relevance to the United States in 2020.