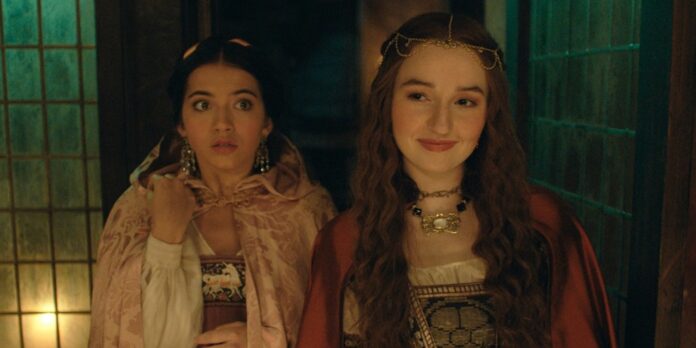 THE STORY – Heartbroken when Romeo meets Juliet and begins to pursue her, Rosaline, Romeo’s recently jilted girlfriend, schemes to foil the famous romance and win back her guy.

Everyone knows the story of Romeo Montague and Juliet Capulet, two star-crossed lovers from feuding families who fall in love and tragically die in their pursuit of being together. Their tale has sparked several adaptations over the years and remains one of the most recognizable love stories of all time. But few seem to remember that Romeo’s heart belonged to another woman at the start of William Shakespeare’s famous tragedy. Before Juliet, there was Rosaline, her cousin, who Romeo was deeply in love with – although they never actually meet in person in the play. When he plans to meet her at the Capulet ball, he instead runs into Juliet, and the rest is history.

But what happened to Rosaline? Karen Maine’s “Rosaline,” a funny and modern retelling of the Shakespeare play that will appeal to younger audiences, aims to give us a few answers. Maine delighted many with her feature directorial debut “Yes, God, Yes,” about a Catholic teenager discovering her sexual urges and found a way to stand herself apart with her humorous female-led film. She does it again with “Rosaline” as she peels back the curtain on this heartbroken but resilient young woman.

We’re familiar with the romantic balcony scene in “Romeo and Juliet” where the two young lovers agree to marry each other. Still, he actually pulled the move first on Rosaline – awkward! We meet Rosaline (Kaitlyn Dever) and Romeo (Kyle Allen) swooning over each other on the young woman’s balcony. As Romeo enchants her with poetry, audiences might think the film will stick to its Early Modern English, but Rosaline, interrupting him with the version of English we’re more familiar with today, immediately sets the tone for the rest of the film: You’ll recognize this story, but you’ll see it in a new, modern way. Knowing where this love story ultimately goes, audiences will get a kick out of Rosaline, saying people will be “saying our names for centuries.” You’ve got to give it to her; she was halfway right with that one.

Even though she has devoted her heart to Romeo, there is a feud between her family and his, and their love seems almost impossible. But Rosaline has found support in Nurse Janet (played by a hilarious Minnie Driver) and best friend Paris (Spencer Stevenson). However, her father (the consistently solid Bradley Whitford) is set on finding a man to marry his daughter, even though she repeatedly says she’s not interested and wants to travel the world and become a cartographer. When she meets Dario (Sean Teale), a handsome soldier and prospective husband, she brushes him off as best as possible but isn’t so successful. On the night when she and Romeo plan to meet at her family’s ball – after a previous night’s awkward exchange between the two when she didn’t respond to his “I love you” – she is forced to be on a date with Dario, spends the evening getting soaked by the rain at sea, and ends up losing her “true love” to another woman. Once Rosaline realizes that her cousin, Juliet (Isabela Merced), is the mystery woman, she does everything in her power to break up their relationship and win Romeo back.

Dever is a delight as Rosaline and breathes life into this reimagined young woman who is strong, hilarious, and not afraid to speak her mind. As she plans to drive Romeo and Juliet apart from one another, the funny moments get even more fun, even if they don’t always turn out exactly how she expects them to. Her chemistry with Merced, particularly when the two cousins hit the town and meet other men, and Teale, as they play the will-they-won’t-they game, are high points.

The humor in Scott Neustadter and Michael H. Weber’s script is among its stronger aspects. Shakespeare likely never could have imagined adaptations containing phrases like, “Get up, you lazy cow,” as Nurse Janet tells Rosaline one morning, or other lines poking fun at characters thinking they’ve found true love in a few hours. As we all sat in English class reading this tragedy, there’s no doubt we all thought the story was ridiculous at times, but these screenwriters were brave enough to say it and put it on the big screen. They also creatively find ways to incorporate the original story into a more modern world, particularly with the well-known ending. It would have been even more exciting if the story went off in a more rogue direction and further distanced itself from the original material. However, it takes enjoyable swings nonetheless.

In particular, the way “Rosaline” tackles Shakespeare’s work but makes it easy to comprehend and more friendly toward present-day audiences is commendable and similar to this year’s “Persuasion,” starring Dakota Johnson, based on Jane Austen’s novel of the same name. Modern language and story revamping make these films more inviting and accessible to younger generations, who are likely turned off by their often difficult-to-read literary counterparts. True adaptations exist for those looking for them – hopefully, they enjoy Maine’s unique take as well – but these films will tap into another audience and may inspire them to seek out more of these works. Once they read “Romeo and Juliet,” they might not be particularly pleased with how little attention Rosaline receives, but at least a brave, funny and independent heroine lives on in “Rosaline.”

<b>THE GOOD - </b>A fresh and comedic retelling of the classic love story "Romeo and Juliet" that will attract many who are typically turned off by Shakespeare. Kaitlyn Dever is terrific as Rosaline, a hilarious, no-nonsense young woman who finally receives the spotlight. Scott Neustadter and Michael H. Weber's script is full of humor and finds ways to incorporate Shakespeare's story in their own fun way.<br><br> <b>THE BAD - </b>Because "Romeo and Juliet" is so well-known, audiences will know where this film is headed, and there aren't as many surprises in store as would have been fun to see.<br><br> <b>THE OSCAR PROSPECTS - </b>None<br><br> <b>THE FINAL SCORE - </b>6/10<br><br>"ROSALINE"