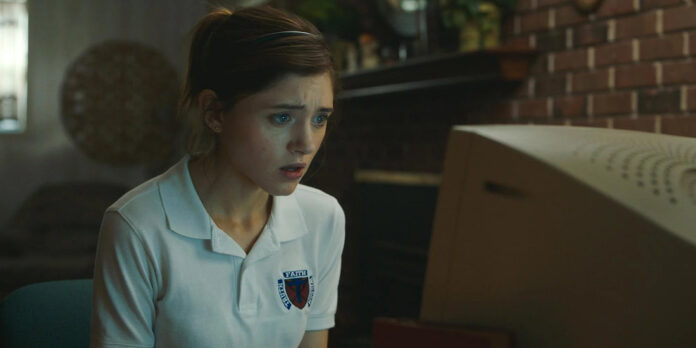 THE STORY – A Catholic girl finds herself having tempting thoughts after an AOL chat turns unexpectedly racy.

​In 2017, writer-director Karen Maine’s short film, “Yes, God, Yes,” went viral in the film community. At a brief 11 minutes, the film’s message about female sexuality and religion is tight-knit and left people wanting more. The 2020 feature-length version of the story begins with a passage, rewritten slightly for the film, from Revelation 21:8: “As for the faithless and the sexually immoral – their portion will be in the lake that burns with fire and sulfur which is the second death.” This harrowing quote is then followed up by the Urban Dictionary definition for “tossed salad.” Unfortunately, the comedy and drama aspects of the film don’t sync as well as they do during the title cards, and Maine’s debut feature becomes muddled until it fizzles out.

The story follows Alice (Natalia Dyer, reprising her role), a timid highschooler attending a catholic private school. After taking a sex-ed class, Alice becomes increasingly curious and shameful under the unrelenting eyes of God. One night, as she’s playing games in an AOL chat room, Alice receives a message from an unknown user who later sends her pornography. Like the girl she’s supposed to be, Alice exists out of the chat, but then curiosity gets the best of her and she can’t resist. Sex then plagues Alice’s mind and burrows like an unearthed parasite, as she goes to a camp to “better herself” and only gets increasingly confused and frustrated. What follows is a young woman’s discovery of herself and her sexuality, and how she navigates the two around her religion.

From the beginning of the film, Alice’s reputation as a “good girl” gives way as a rumor spreads about her and a male friend. As the film continues, people’s view of Alice gets worse and worse, with teachers along with students ridiculing her to no end. This never happens to her male counterpart, whose relationships and reputation remain intact. It’s clear that male sexuality is seen as normal and female sexuality is taboo – even in the eyes of God. While in her sex-ed class, Alice’s teacher describes men as akin to microwaves and women to ovens: women take longer to get aroused so their pleasure is almost unattainable. Therefore, for women to actually seek pleasure out is immoral. This aspect of the film – the feminist lens of how female sexuality is viewed – is the most intriguing part; however, it isn’t elevated enough.

Unfortunately, this aspect of the film’s script is lost as it attempts to be a comedy along with a drama. While the script is told with an admirable amount of earnestness, the comedic aspects are almost cringe-inducing: Needle drops fall flat, every actor (other than Dyer and Timothy Simons as Father Murphy) seems like they’re in a different film, and the comedic timing doesn’t work. While Dyer plays Alice with conviction, it’s easy to believe she is indeed a teen on the cusp of self-discovery, but unfortunately, her performance is isolated. Had the film just focused on Alice and the dynamic between her and her hypocritical teacher/pastor, the film would have translated better.

While “Yes, God, Yes” is an intriguing look at female sexuality and religion, the film stretches itself thin trying to make a feature film out of a successful short. In 2017, 11 minutes of this concept got the story across well, and although Dyer’s talent and Maine’s direction are fantastic, it’s not a story quote deserving of its 78-minute runtime. If one specific genre was harnessed throughout the film, it could have been a success, but the mixing of drama and comedy just doesn’t work. Maine shows a lot of promise, and hopefully, her next feature will attempt to future master the blending of genres just as the film’s knockout ending promises.