“GABBY GIFFORDS WON’T BACK DOWN” 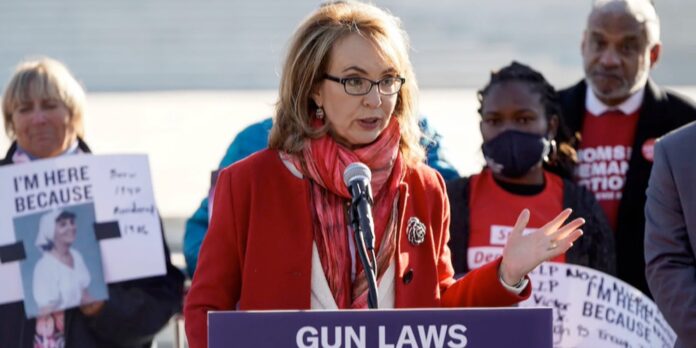 THE STORY – The film follows the recovery and aftermath of the 2011 assassination attempt of congresswoman Gabrielle Giffords. Giffords becomes partially paralyzed and has a language impairment, aphasia.

When Betsy West & Julie Cohen’s new documentary, “Gabby Giffords Won’t Back Down,” had its theatrical run last summer, I came away wondering just where I would place their new movie in their overall filmography. I was a great admirer of their two documentary profiles released in 2021 — “My Name is Pauli Murray” and “Julia” (which focused on celebrity chef Julia Child), as well as their Oscar-nominated profile of Justice Ruth Bader Ginsburg, “RBG.”

At first, something about this new film, however, didn’t sit quite right with me. The film’s lengthy sequence chronicling Giffords showing the political ropes to her husband, astronaut Mark Kelly, who was running for the U.S. Senate, was, of course, an important inclusion in her story. But the timing of the film’s release, in the midst of Sen. Kelly’s own reelection campaign against MAGA candidate Blake Masters, made these scenes play, at least for me, as a partisan intrusion into the film that took me out of what was otherwise a pretty straightforward bio. I soon realized, however, that the problem was with me, not the film. So now that Sen. Kelly has been successfully reelected to the Senate, I took another look at “Won’t Back Down” to see how it plays today. And it plays very well, thank you.

After a quick introductory set-up bio of Gabby (as everyone calls her), from her early years as a TV pitchwoman for her family’s local tire business to her campaigns for the Arizona State House and Senate and finally, her successful campaign for the U.S. House of Representatives, we quickly get to the heart of “Won’t Back Down.” West and Cohen are known to be thorough researchers when it comes to their film biographies, but they are filmmakers who also know where their story lies. And for Gabby, the unmistakable turning point in her life occurred on January 8th, 2011, when she was shot in the head in an attempted assassination at a constituent event just outside Tucson. The violence is never shown in “Won’t Back Down,” but the ghost of that moment lingers over the entire film.

West & Cohen have chosen to break down Gabby’s story into two parts: the first chronicles her lengthy and challenging rehabilitation as she learns how to speak again. Thanks to the fortunate decision by Mark to bring his video camera into her hospital room to capture a record of each moment of her recovery, we see the destructive damage to Gabby left by that assassin’s bullet. It’s painful to watch the struggle of this vivacious young woman, who once had the gift of oratory, to open one eye or to speak one word, but the courage and determination she displays in her fight prove to be formidable. Gabby slowly regains her use of speech, thanks to the diligence and skill of the hospital’s medical team and the caring but persistent efforts of its speech therapists. Though suffering from aphasia, which at times keeps her from comprehending and expressing language, the joy of being able to speak once again is evident in her smiling face.

And through it all, there is always Mark. With every gesture and each interaction with Gabby, he shows his devotion and commitment to her recovery. Even when duty called and he had to lead his final flight as commander of the space shuttle Endeavour, his thoughts and public statements from space always included Gabby. That devotion doesn’t waver as we move into the film’s back half, which captures Gabby’s new post-recovery life both at home and, eventually, on the public stage. As Gabby continues to recover her language skills, she realizes that her most fervent wish — to return to Congress — may not be in the best interest of her constituents, whom she believes deserve a Congressman who can give 100%.

Still, for Gabby, there is a battle to be fought (particularly on gun safety laws), and Mark becomes convinced to take up the mantle and run for the U.S. Senate. But as a newbie, he possesses zero political skills, and that’s where Gabby’s strength lies. By imparting to him all that she has learned about succeeding at retail politics — listening to your voters and taking to heart what they have to say — she is able to repay Mark’s love and devotion to her in kind. With Mark’s proven leadership skills and Gabby’s political experience, they make a formidable team in a successful campaign that only brings them closer to one another.

And that’s where “Gabby Giffords Won’t Back Down” fits comfortably into the notable filmography of West & Cohen. Their most recent documentaries have focused on women who were not afraid to take on a fight, whether it was for justice (“RBG“), equal rights (“My Name Is Pauli Murray“), or a woman’s place in a male-dominated field (“Julia“). And Gabby Giffords is nothing if not a fighter. But “Gabby Giffords Won’t Back Down” is, at its core, a love story skillfully told in an inspiring and utterly heartwarming manner.