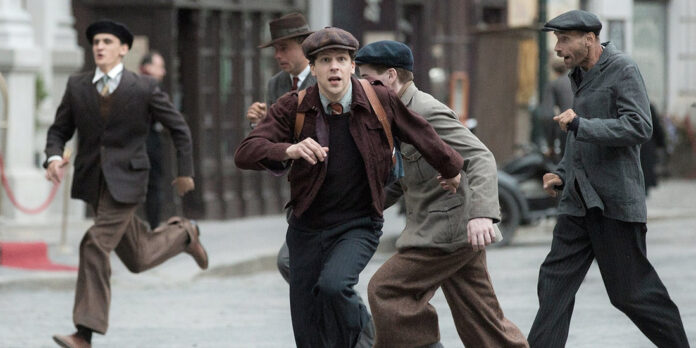 THE STORY – Before he becomes a world-famous mime, aspiring Jewish actor Marcel Mangel joins the French Resistance to save thousands of orphaned children from the Nazis.

Even those familiar with the career of French mime Marcel Marceau may not know that he was a part of the French Resistance during World War II and helped save the lives of many Jewish children. Writer-director Jonathan Jakubowicz sheds light on Marceau’s work during the war with his latest film “Resistance”. The film is a difficult watch as it touches on the horrors committed by the Nazis, and in particular, the notorious Klaus Barbie, but it’s also oddly uplifting. While the film has issues with pacing and tone and lacks a singular narrative focus, it features some of Jesse Eisenberg’s finest work as the Jewish mime.

Strangely, the film has two beginnings. First, a young Jewish girl named Elsbeth (Bella Ramsey, who you might recognize from “Game of Thrones”) witnesses her parents being dragged out of their home and killed by Nazis. Then we flash forward to General Patton (Ed Harris) speaking to the Allied troops at the end of the war about Marceau’s bravery. After that, the story goes back in time to a young Marcel Marceau who’s an aspiring mime working in his father’s kosher butcher shop. He’s soon involved in a plan to rescue Jewish children thanks to his cousin and the girl he likes, Emma (Clémence Poésy). Marcel discovers that the children enjoy his miming and he spends more and more time with them. As France is pulled into the war and things become difficult for Jewish families, he ends up involved with the French Resistance and eventually starts smuggling Jewish children out of the country.

The film mixes in historical footage of Hitler and armies and has titles giving historical context. It also liberally sprinkles in maps trying to show where the characters are as they traverse France. Often, World War II films are focused on England or Germany so it’s interesting to see an English-language one with a French focus. The film has a handful of really great moments, like one striking scene that cuts between children singing in a church and Nazis executing people in a bright blue drained swimming pool.

The film often veers away from Marcel, trying to tell a larger story about the French Resistance and highlighting the cruelty of Nazi officer Klaus Barbie, known as the “Butcher of Lyon”. There is a disturbing, though not graphic, torture scene between Klaus and Emma, and some scenes with Klaus meant to highlight that the Nazis didn’t only target Jewish people, but gay men and political opponents as well. There’s also an underdeveloped storyline in which Klaus’s young wife begins to realize what her husband is involved with. Matthias Schweighöfer is appropriately despicable and cold as the officer responsible for up to 14,000 deaths during the war. While it’s interesting and demonstrates the cruelty of the Nazi regime, it feels like the film would have benefitted from spending more time with Marcel himself.

This is easily some of Eisenberg’s best works and it stands out from his usual roles. He’s earnest and a bit self-righteous as Marcel, eager to prove himself. It’s a much more emotional performance than I would expect from him. Poésy also gives a fantastic performance as Emma, going from determined to distraught to numb. In fact, the cast is all good in their roles aside from some less than stellar accent work.

It’s a much more beautiful film than most war films as lots of scenes take place in nature. The production design of the towns is good, but the cinematography is definitely at its best in the countryside scenes. While the costuming is run-of-the-mill for this sort of period fare, the hairstyling (particularly on Poésy) is lovely.

In one scene, Marcel tells Emma, “The best way to resist…is to make sure more Jews survive.” The film is dedicated to the children killed by the Nazis and it feels like a very relevant message for America considering the issues surrounding the treatment of immigrant children over the past year. “Resistance” builds tension well, but struggles to keep a strong thread of storytelling going. It’s worth seeing for a new look at World War II and the good performances, but it doesn’t do justice to Marcel Marceau.