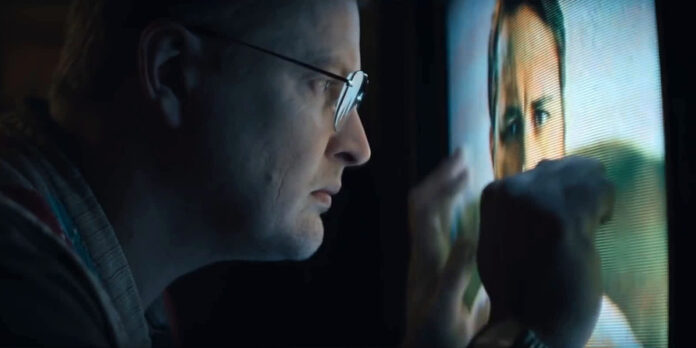 THE STORY – A strange VHS tape allows a lonely bachelor named David to find companionship with Andy — its charming and charismatic host. However, Andy’s friendship comes at a cost, and David desperately struggles to afford the price of admission.

It’s always fun to see something depicted on film that you’ve never seen before. In the case of the new thriller, “Rent-A-Pal,” the surprisingly menacing concept revolves around the ’80s/’90s phenomenon of video dating services. We’ve seen this short-lived method of courtship used in films before, but never in such a frightening light. And that’s not the only surprise this effective little movie has in store.

It’s 1990, and David (Brian Landis Folkins) is a lonely man who lives with and cares for his dementia-ridden mother. After unsuccessfully using a video dating service for six months, he stumbles upon a mysterious and inviting VHS tape called “Rent-A-Pal.” The tape consists of nothing but lengthy footage of a solitary figure named Andy (Wil Wheaton) as he speaks to the viewer in a seemingly friendly and conversational manner. At first, David is understandably off-put by this strange concept, but over time, he begins to indulge more and more in chatting with the video personality. His repetitive viewings of the tape become something of a therapy session as he tells Andy all about his childhood traumas, insecurities, and deepest secrets. But Andy’s friendship slowly begins to require more than David may be prepared to give.

David’s interactions with Andy are some of the more inventive parts of the film. They strike a fine balance between being initially charming to slowly taking on a more sinister quality. Wheaton is fantastic as the video host, playing effortlessly charismatic with just a hint of something menacing bubbling under the surface. It would be easy to lean fully into the creepy aspects of the character, but he smartly plays Andy as sincere. Further helping sell these interactions is the way director Jon Stevenson perfectly captures the look and feel of low budget video recordings. The video, and especially the sound quality, are excellent emulations of a specific type of VHS capture. The videos created for the movie are eerie in their stillness and believable in their aesthetic.

Impressively, Stevenson puts to film a very specific feeling. The entire film feels claustrophobic and isolated, perfectly putting the audience in the mind and space of the basement-dwelling main character. Stevenson’s screenplay uses minute details to show David’s lonely routines, and he films these repetitive and thankless tasks with a sympathetic eye. When the movie ends, we feel such a specific type of sadness, not necessarily because of anything that happens in the plot, but because of the empathetic way the film depicts David’s life.

The aforementioned main character is portrayed wonderfully by Folkins. He plays David as downtrodden without giving into the more pathetic inclinations a lesser performance might succumb to. As his elderly mother, Kathleen Brady finds a realistic blend of irritating and pitiable. And Amy Rutledge is a breath of fresh air as Lisa, a potential match for David. These three performances are grounded in a way that makes the slightly fantastical elements of the story even more plausible because they have laid a foundation of realism upon which the film is constructed. Sure, some of the more brief performances from less prominent members of the ensemble may not share that convincing quality, but they don’t distract from the film as a whole.

“Rent-A-Pal” is an unnerving and unexpectedly sad look into a specific world that is no longer active. Both an intimate character study and a manic, unpredictable thriller, it’s the perfect film to watch right now given the repetitive and claustrophobic nature of these quarantined times.