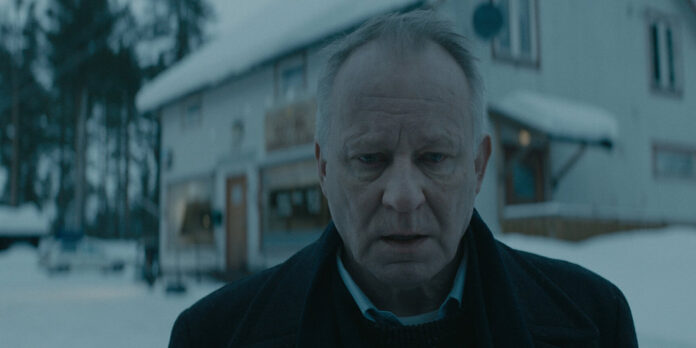 THE STORY – A man retires to solitary life in the Norwegian woods after the death of his wife, but the past resurfaces.

​​​“Out Stealing Horses,” directed by Hans Petter Moland, is a beautifully shot, introspective film about a man remembering a life-changing summer when he was fifteen years old. This Norwegian film is based on the popular 2003 novel by Per Petterson. As events unfold over multiple timelines, the cinematography and score are fantastic, but American audiences are likely to be put off by how slowly the film moves and how it keeps its audience at arm’s length.

Trond (Stellan Skarsgård) is a man in his sixties who lives a life of isolation in Sweden following the death of his wife several years prior. When he runs into Lars (Bjørn Floberg), he is forced to remember the summer he spent with his father in a remote cabin on their woodland farm in 1948. Meanwhile, Trond and Lars grapple with their connection. The film jumps back and forth between 1948 and 1999, eventually also delving into events that occurred in 1943 and 1956, and the amount of going between timelines can be exhausting.

The film relies too heavily on voiceover narration and tends to over-explain what the audience is seeing. Trond is so repressed and introspective that it makes it difficult for the viewer to connect with him, particularly in the 1999 storyline. Skarsgård does a great job of showing how tormented Trond is, but the performance feels one-note as he isn’t given much variety.

The story moves along at a glacial pace, often taking several minutes for shots of scenery, and while they are beautiful, it does begin to feel repetitive. There’s also a subplot in which fifteen-year-old Trond develops a crush on his friend’s mother, which is a bit uncomfortable especially in the scene where there are flashes of close-ups on her body as she rows a boat. I often think a film would benefit from being fifteen to thirty minutes shorter, but I rarely think so in the first half-hour as I did with this.

For all of its problems, the film is beautiful. It was shot in Norway and Lithuania and the scenery is stunning. The cinematography by Thomas Hardmeier and Rasmus Videbæk does a great job of showcasing the landscape and the animals, including the titular horses. The film switches between color palettes – one gray and cold, the other bright and colorful – seemingly dependent on the mood of the main character. The sound design of the film is also commendable, particularly in how it blends the sounds of nature. Kaspar Kaae’s unusual score is at times energetic and rousing, and at other points haunting, but always carries an air of unease that does a fantastic job at creating the film’s atmosphere.

“Out Stealing Horses” was Norway’s entry for Best International Film last year at the Academy Awards, but wasn’t nominated. (As Trond’s father tells him at one point, “But that’s life. Things happen.”) The film attempts to delve into an interesting relationship between a father and son that seems more defined by the distance between them despite their physical proximity, but unfortunately, the more interesting parts of the plot aren’t fully developed. Is it worth watching? Only if you really like beautiful shots of trees.