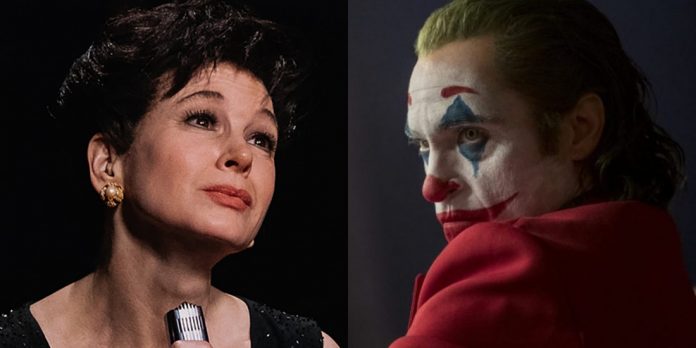 In the world of Oscar Buzz right now, there are two performances that are dominating the conversation: Joaquin Phoenix in “Joker” and Renée Zellweger in “Judy.” These performances are inextricably linked, despite out of the context of the world of awards season, they may appear to have nothing in common. They vary in ways, but they will likely proceed along the same trajectories for the next four months. It’s a very early, some may say irresponsible prediction that these are our Best Actor and Best Actress winning performances this year.

The performances of Zellweger as Judy Garland and Phoenix as Arthur Fleming are similar in the fact that they are overt, noisy, transformational, physical, and unambiguous. They’re filled with the classic, juicy acting tropes that actors eat up. Zellweger’s performance is one of a perfected craft; Phoenix’s performance is one of painful commitment. These portrayals leap off the screen. They’re the type of performances to which voters in awards bodies tend to be drawn. Older voters across the Academy will be absorbed by Zellweger, and actor’s actors, in particular, will be transfixed by Phoenix’s character choices. The quality of the performances by Phoenix and Zellweger are really taking the first hand in the heavy lifting of these campaigns.

But on a non-substance level, Zellweger and Phoenix are on similar roads for winning Oscars this year because of the films in which their performances reside. Sometimes pundits become wary of films that are released early. The theory is, the campaigns run out of steam and people’s interests become redirected to something more new and shiny. “Judy” was released theatrically on September 27 and “Joker” on October 4. In these cases, building the profiles of these two actors is of the utmost importance. Having a longer span of time to do so, I believe will strengthen these performances in the Oscar race and make their wins seem inevitable and urgent. Embedded in the campaign approaches of Zellweger and Phoenix is the fact that neither film has the greatest overall reviews. Both actors need this prolonged exposure to compete because their films are not competitive by themselves.

The reviews for “Joker” are divisive, which is in some part bred by the social controversy and larger discussion about the film’s cavalier approach to handling its sensitive subject matter. On the other hand, the reviews for “Judy” have been mostly positive, but in large part because of Zellweger’s performance. It follows similar reviews as films like “My Week with Marilyn:” mostly approving because of the lead performance which elevates the film. As films, “Joker” is seen as controversial and “Judy” is seen as “standard.” Contradictory, these are two audience-friendly films, which shows in each film’s box office success. “Joker” has broken every record imaginable; everyone swarmed to the theaters to see the standalone origin story opening weekend. “Judy,” while having a more modest box office and release platform, is holding its own and making a handsome profit for the type of film it is. It’s the type of movie that older audiences will be drawn to and for that reason could sustain a cold box office gross over the next few weeks.

The greatest similar asset Zellweger and Phoenix have is the fact that they are playing highly known and recognizable entities within pop culture. Pick any random stranger off the street, and they would likely know who Judy Garland and the Joker are, separate from the 2019 films. This level of familiarity combined with the larger-than-life performances helps Zellweger and Phoenix surmount obstacles like less great reviews and potentially limited Oscar nominations for their films. Also, hence, the box office success stated above. 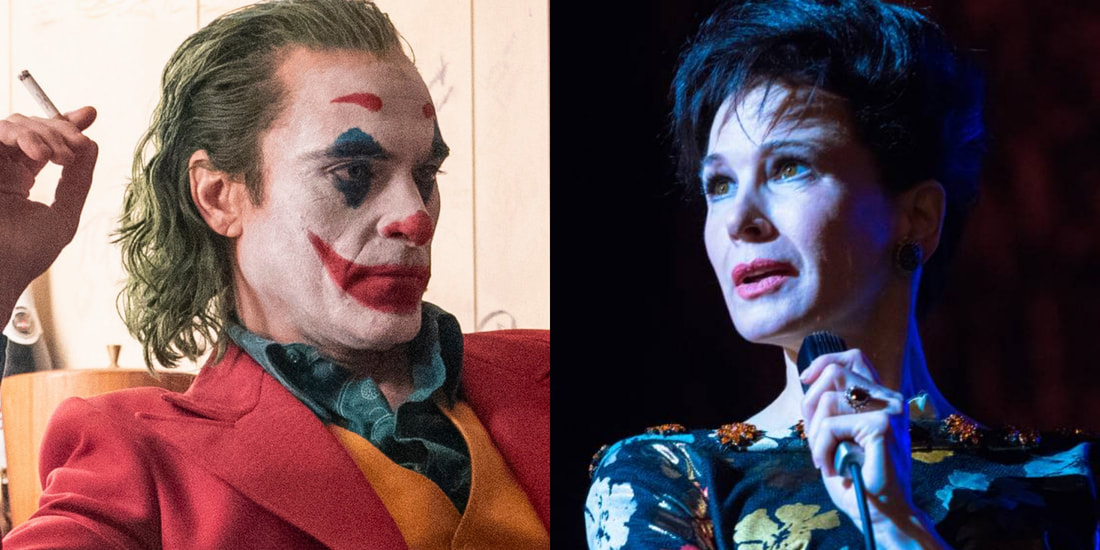 There’s a decent chance that each performance could be the lone nomination from their films, because of those criticisms stated above, though it’s not particularly likely. “Judy” is in the hunt for a deserved a Best Makeup/Hairstyling nomination and maybe Best Costume Design, which combined with a potential Best Actress win, puts it in the territory of “The Iron Lady.” On the other hand, it depends on how “Joker” shakes out over the next few months. The boatloads of cash it’s collecting at the box office is the film’s greatest asset in seeking an Oscar win for Phoenix and other potential nominations. “Joker” could emerge as the public-favorite contender the Oscars jump on board with, like they did with “Bohemian Rhapsody.” There are several nominations the film could compete for, such as Best Picture, Best Original Score, Best Cinematography, Best Production Design, and Best Sound Mixing, but nothing is secure yet. It could be Phoenix or bust if something goes wrong for the film in the coming weeks.

Even people who strongly dislike or even detest “Joker” or “Judy” are willing to admit the accomplishments of the actors at the helm of each film. The way I see it, if and when Zellweger and Phoenix represent “Judy” and “Joker” at the Oscars with a few other nominations, they’re helping each other. There is such a fear by pundits to predict acting winners from non-Best Picture nominees. The contradictory buzz has already begun against these two based on the precedent. Therefore, if both Phoenix and Zellweger are from non-Best Picture films and are the most heatedly buzzed performances of the year, the two of them united for the wins make the argument less credible if only one of the performances was from a non-Best Picture film with marginally positive critics reviews. They cancel out the “not a Best Picture nominated film” narrative for each other. The story of the season may end up being “The Academy recognizes these towering standalone performances because they are undeniable, the problems with those films overall be damned.”

On a side but related tangent: People have tried to use Glenn Close’s loss for “The Wife” against the idea that Zellweger, in particular, cannot win this year. Humbly, I would argue that’s a false equivalency. Zellweger’s “Judy” performance is much closer to say Michelle Williams in “My Week with Marilyn” and Meryl Streep in “The Iron Lady” than it is Close’s Oscar-losing performance last year. It’s a biopic of a beloved American figure in a much louder, tangible performance than Close’s internal work of a character from an obscure novel. “Judy” is a more competent film than “The Wife” was and has already made more money than The Wife” did in its entire run. Weirdly, despite Close being “overdue” for an Oscar win last year, that narrative to me felt like it was playing the “enviable” note more than it was playing the “fresh and exciting,” something that Zellweger’s comeback campaign has in “Judy.”

There are some minor differences in the overall award season plans. For instance, Zellweger is a famously good campaigner and she started at a ten with schmoozing pundits at the Telluride Film Festivals and in interviews promoting the film. Phoenix is known for the opposite: awkward interviews made all the more uncomfortable by his difficult and mercurial behavior. Zellweger’s performance and film have a greater sense of safety in lasting all season long because similar roles have won Best Actress in the past. Whereas, “Joker,” at its core, is still a comic book movie and Phoenix portrays an anti-villain, neither of which the Academy totally loves to reward.

​Zellweger is likely locked and loaded for a nomination due to a weak Best Actress year and has the potential to win the New York or Los Angeles Film Critics Circle. She will likely be able to sweep her way through all the major televised award shows (Critics Choice, Golden Globes, SAG, BAFTA, and AMPAS) with ease. Her biggest competition is Scarlett Johansson, whom I don’t take as too much of a threat at this point. Apparently “Marriage Story” is told through her co-star’s perspective more than her character, and for being such a high-profile movie star, she’s never been nominated at the Oscars. Not for “Lost in Translation,” not for “Match Point, not for “Her.” (My favorite Johansson performance is “Don Jon,” and that 2013 snub still hurts.) This all suggests the Academy has some bone to pick with her. Johansson’s cultural prominence thanks to the Avengers character Black Widow, has been undercut by obnoxious public comments she’s made in recent years.

Zellweger, in practically every scene of her film, represents everything to love about “Judy” and Johansson is the fourth most impressive aspect of “Marriage Story,” behind the writing, supporting actress performance by Laura Dern, and the lead actor performance by Adam Driver. It’s difficult to imagine Johansson winning A) without Adam Driver, who is more of the focus of the film, B) without the film having a “Network” evening at the Oscars, winning Best Actor, Best Actress, Best Supporting Actress, and Best Original Screenplay, C) without the film winning Best Picture, too. A fourth route could be “Marriage Story” being like a “Who’s Afraid of Virginia Woolf?,” where both actresses win, despite the men of the stories having more screen time overall.

Phoenix will likely be circumvented by Adam Driver’s work in “Marriage Story” with the more prominent film critics associations. Phoenix may win lower-level critics groups, however, like Rosamund Pike for “Gone Girl.” Though that will cost him, I’m confident Phoenix will prevail at the televised award shows. He has the public behind him, and ask Rami Malek…that means a great deal. On paper, this would be the quintessential showcase year for Adam Driver to win an Oscar. His villainous role in the blockbuster “Star Wars” trilogy will come to a close with “Star Wars: The Rise of Skywalker.” He just received his first Oscar nomination last year for “BlackkKlansman,” and he’s also delivering fantastic work in a total of five films this year, including “The Report.” He is everywhere. However, many see his delicate work in “Marriage Story” similar to Ethan Hawke’s in the way of being more of a critic’s performance by nature or like Bradley Cooper in “A Star is Born” by way of sounding logical in theory but not implementable in practice. In this metaphor, expect Phoenix’s thunderous work in “Joker” to be more of a mainstream favorite, like Malek in “Bohemian Rhapsody.” It is absolutely fitting, given the Internet’s antipathy toward “Joker” like “Bohemian Rhapsody” last year.

The lead performances in the one-word titled films that both begin with the letter “J,” “Joker” and “Judy” are in the hunt for the Best Actor and Best Actress trophies, and they’re on similar paths to the Oscar podium in February. Obviously, we have a long road ahead of us, but I feel confident in saying they’re the two who will likely hear their names called on Oscar night.

Do you think either one of these two actors will win the Oscar for their roles in these two movies? Let us know your thoughts in the comments section below or on our Twitter account.