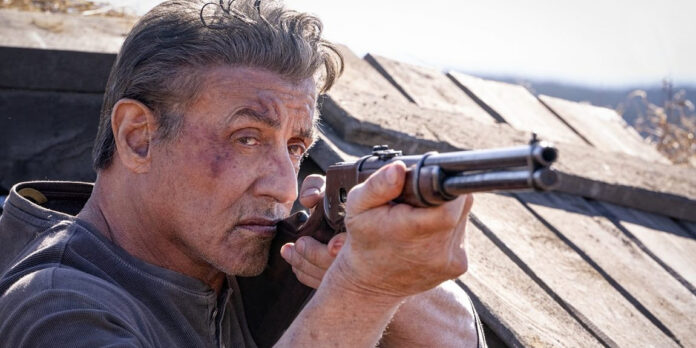 ​​​​​​If the title is any indication, after 37 years and five entries the Rambo film series, at least the part with Sylvester Stallone, is coming to a close. Starting with “First Blood” in 1982 this franchise has held a unique place in modern film, cementing the concept of the action sequel in the public conscious with “Rambo: First Blood Part II” and raising the violence exponentially with every new entry. They are unapologetically political with a distinctly conservative bent, and this new film, “Rambo: Last Blood” continues tradition and ups the ante in every way, giving audiences a gruesome and simplistic movie that will appeal to certain filmgoers and leave the rest out in the cold.

After decades of fighting wars and vendettas-and, the incompetence of the American government-a now 72-year-old John Rambo has finally settled down. He lives in Arizona with his niece Gabrielle (Yvette Monreal) and her aunt Maria (Adriana Barraza) on a horse farm and is content to spend his days training animals and riding with Gabrielle. Just before Gabrielle is set to go off to college she discovers the whereabouts of the father who abandoned her and her mother years before. Insistent upon seeing him she goes to Mexico against the wishes of both Rambo and Maria and quickly finds herself betrayed by a friend to a cartel of drug smugglers and sex slavers. When Rambo discovers where she has gone he follows her to Mexico but finds himself unprepared to deal with the large gang of men led by the Martinez brothers Hugo (Sergio Peris-Mencheta) and Victor (Óscar Jaenada). After a thorough beating and subsequent rescue by journalist Carmen (Paz Vega), Rambo is determined to save his niece and is set on a trail of vengeance that leads to a final climactic battle of epic proportions that is one of the goriest and over the top endings in the franchise, which is really saying something.

“Rambo: Last Blood” is competently made and decently acted but other than the practical effects nothing is really remarkable. Due to how intense the violence is, the filmmakers made the right choice to do most of the wounds and bodily harm as practical effects, which gives every scene a visceral reality that is far more affecting than it would be with CGI. Stallone plays Rambo as he usually does, a stoic and driven man who quickly becomes consumed by his darker side when pushed to the edge. Unsurprisingly there isn’t much scope here for him to show off his acting skills as he did in “Creed,” instead, he embraces the simplicity of the character and goes for broke with his display of old man machismo in a performance fitting for what is probably his last entry in the series. Yvette Monreal does her best with a lackluster part that exists solely to give Rambo reasons to kill people, a perfect example of the trope of the Disposable Woman. While Peris-Mencheta and Jaenada give fun performances as the cartoonishly evil Martinez brothers, they are also nothing more than caricatures meant to inspire audience hatred.

It is easy to dismiss “Rambo: Last Blood” as pulpy schlock meant for the action junkies and gorehounds among audiences and while this is mostly true it also ignores the deeper meaning behind the thoughtless violence and overt racism on display. Every Rambo film is based around a real-world conflict, whether it be prejudice against Vietnam vets or the Russian invasion of Afghanistan and each one (with the possible exception of “First Blood”) sends the message that the solution to all of these problems is violence against America’s enemies. Currently, there is a debate in America about immigration and whether or not it is acceptable to allow Hispanic people a safe harbor here and while the film never explicitly touches on this, it blatantly displays the residents of Mexico as generally untrustworthy and dangerous. It tries to avoid the obvious racial issues in the film by having Gabrielle and Maria also be Hispanic and including Carmen as Rambo’s rescuer from the cruel cartel, but all three of these women are little more than paper dolls who are there only to reflect the goodness within Rambo. Long before the end of the film is clear that it is just short of propaganda for the idea that Mexico and its people are dangerous and untrustworthy and the only solution to the problem is violence. That is nothing new for Rambo however, the only difference in this one is who the bad guys are which makes it a fitting end for series that is more complicated than its cheesy stories and exaggerated brutality indicate.