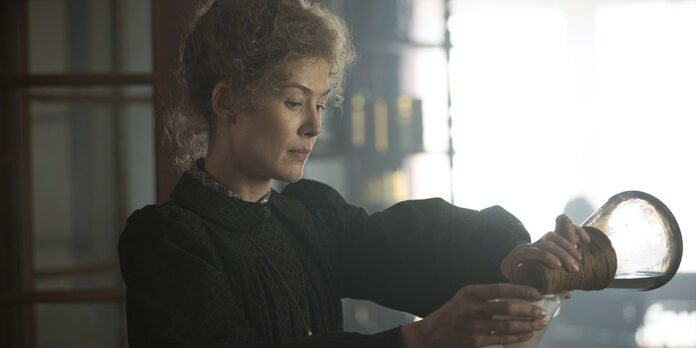 THE STORY – After the death of her beloved husband, Marie Curie’s commitment to science remains strong as she tries to explain previously unknown radioactive elements. But it soon becomes terrifyingly evident that her work could lead to applications in medicine that could save thousands of lives — or applications in warfare that could destroy them by the billions.

​​​​​​​With no fewer than three clarifications in one minute that the old woman who looks like Rosamund Pike in (fantastic) old-age makeup is indeed Marie Curie, “Radioactive” doesn’t exactly start with its best foot forward. Thankfully, Marjane Satrapi’s latest film only improves from there, providing a fantastic showcase for Pike that could very well bring her back into the Oscar conversation.

A somewhat paint-by-numbers biopic of Curie, “Radioactive” goes through the most eventful time period of Curie’s life, dealing with her scientific experiments and discovery of radioactivity, and the new elements Radon and Polonium, as well as her marriage to fellow scientist Pierre Curie. For anyone unaware of the details of Curie’s life, the film does a great job of filling in details, and an even better job of explaining the science behind Curie’s experiments. An early scene featuring only Evgueni and Sacha Galperine’s fantastic score is one of the most exciting depictions of scientific experimentation ever put on film and manages the neat trick of being fully understandable in broad strokes without ever stating outright what is going on.

To the film’s credit, the screenplay (by Jack Thorne from the graphic novel by Lauren Redniss) goes out of its way to avoid becoming hagiography. Marie is presented in full, flaws and all, and the film contrasts big moments in her life with future uses of radiation, most notably Chernobyl and Hiroshima. Unfortunately, those flash-forward scenes are where the screenplay and direction are at their most hackneyed, nakedly preying on our emotions and knowledge of the events. They work as an impactful way of showing that while radioactivity was an incredible scientific find, it hasn’t been all great for humanity, but as shot, they also come across as somewhat tacky.

Rising above all this, though, is Rosamund Pike. As Marie, she gets to show off an incredible range of emotions as well as age several decades. It is a fantastic performance, adding some very welcome and somewhat unexpected humor to the proceedings. Pike understands that Marie’s stubbornness is not only born from being a woman in a man’s world but is simply a part of her personality. She also makes the most of a fantastic scene with husband Pierre after he has given an acceptance speech for the Nobel Prize that Marie believes takes full credit for the work they did together, and the work she did alone. “My main problem,” she frustratedly snipes at Pierre, “is you, and the fact that I love you so utterly.” A film about a brilliant, ahead-of-her-time woman rarely allows the woman to admit that she loves a man and actually does consider putting him above herself, and Pike perfectly captures that dichotomy.

“Radioactive” is a step up from Satrapi’s last film, 2014’s disastrous “The Voices.” Perhaps it’s the graphic novel source material, perhaps it’s her own connection to the material, but her direction (with an assist from Anthony Dod Mantle’s cinematography), is more assured and consistent than it has been since her breakthrough adaptation of her graphic novel “Persepolis.” But even still, “Radioactive” never fully connects. For all that it has a distinctive point of view in the writing, it still feels at many points like any run-of-the-mill BBC Christmastime biopic. The film’s most distinctive choice, a dream sequence that occurs after Pierre’s death, feels like it is from a different film entirely, and perhaps a better one, one that abstracts the Curies’ work even further and delves even deeper into the psychology of someone so brilliant and prickly. But as it stands, “Radioactive” is a fine tribute to a woman who deserves all the recognition she can get for her pioneering work.