​Questions Before The 2022 Fall Film Festivals 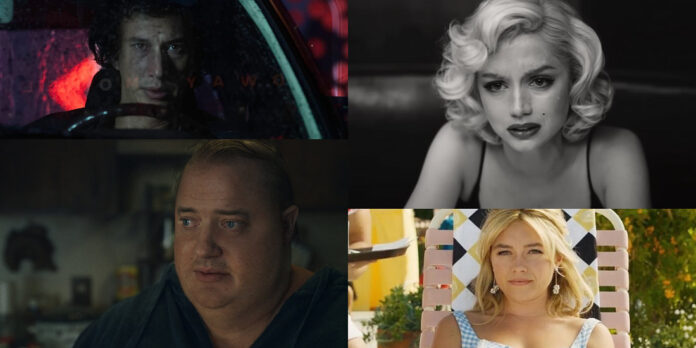 Awards offseason is about to officially be over, with the Venice, Toronto, and Telluride film festivals kicking off the 2022 Oscar season in earnest. But from the Venice film festival’s opening night on August 31st to the Toronto International Film Festival announcing its People’s Choice Award winner on September 18th, the three weeks in between may determine the next eight months of the Oscar race. In that time span, a lot of important questions and issues will be raised and potentially answered, while a billion more new questions and issues will surely come up. But for this opening act of the season, these are the biggest early mysteries that the festivals can help clear up.

Is “Bardo” Netflix’s next great Oscar hope?
2022 has been a rotten year for Netflix, to put it kindly – and perhaps “The Power of the Dog” getting upset by “CODA” and far more upstart streamer Apple+ was an early harbinger. Yet after four straight years of Best Picture upset losses or plain old under achievements, Netflix will finally try one more time to break through for Best Picture.

Unlike “The Power of the Dog” last year, both “The Trial of the Chicago 7” and “Mank” in 2020, “Marriage Story” in 2019, or “Roma” in 2018, Netflix might not have the top preseason favorite to start off in 2022. But that could change if “Bardo (or False Chronicle of a Handful of Truths)” makes a premiere splash in Venice, like Alejandro Gonzalez Inarritu’s last Best Picture winner “Birdman” did in 2014.

Of course, if “Bardo” becomes an early frontrunner, everyone will loudly crow that fellow artsy Netflix films “Roma” and “The Power of the Dog” were too, before they got tripped up at the last minute. Yet as those who lamented Inarritu’s award season success with “Birdman” and “The Revenant” know, he is generally a better Oscars closer than Netflix has been – so could that be the long-awaited final piece of Netflix’s Oscar puzzle?

Is it really “The Fabelmans” or bust at Toronto?
There will be no on-the-record word about Steven Spielberg’s latest film until it premieres in Toronto on September 10th. Yet between “The Fabelmans” semi-autobiographical premise about a young movie lover and his parents’ troubled marriage, the fact Spielberg co-wrote it himself, and how Toronto honored a seemingly similar film in “Belfast” just last year, it might be impossible to imagine Toronto’s big People’s Choice Award going to any other movie this year.

Of course, since “Belfast” ran out of steam for the Academy’s Best Picture months later, winning at Toronto isn’t always a foolproof harbinger of things to come. Then again, it might be a no-win proposition for “The Fabelmans” either way – as it will either win big at Toronto as everyone expects and become the early Oscar frontrunner and villain of the season or get upset and perhaps get counted out right then and there the rest of the way. Nonetheless, until “The Fabelmans” actually screens in Toronto, and until the rest of its competition does as well, it is tough to imagine any other outcome.

Is the Best Actor race really Hugh Jackman, Brendan Fraser, and everyone else?
Last year’s Best Actor race was pretty much decided the minute “King Richard” premiered at Telluride – no matter how else it ended. But this year, it seems pre-ordained that there are two overwhelming Best Actor favorites at the festivals, in this case, Hugh Jackman for “The Son” and Brendan Fraser for “The Whale,” both of which are screening at Venice and then Toronto.

Between Jackman being guided by the same team that made “The Father” and Anthony Hopkins big Oscar winners two years ago, and Fraser riding a major comeback narrative and a transformative fat suit under the guidance of “The Wrestler” and “Black Swan” director Darren Aronofsky, every Best Actor analyst and contender is just standing back to see which one of them, if any, is the bigger frontrunner after the festivals.

Between that and a presumed lack of depth beyond these leaders, Best Actor is already being written off as a two-person race – or one that “Elvis‘” Austin Butler could swoop in to steal if Jackman and Fraser just cancel each other out. Yet first, Jackman and Fraser – to say nothing of others like “Bardo’s” Daniel Gimenez Cacho, “White Noise’s” Adam Driver, and “The Banshees of Inisherin’s” Colin Farrell – have to actually be seen and put these narratives to a real test.

Will the arguments over “Blonde” and “Don’t Worry Darling” end or just begin in Venice?
For various depressing and distressing reasons, the most controversial films premiering at Venice are among the few centering around women. While “Blonde” was always due to be a lightning rod for its “Spencer” like examination of Marilyn Monroe and for its NC-17 rating, the recent off-screen controversies and backlash for “Don’t Worry Darling” have made it an even bigger social media punching bag.

But these films will eventually have to be seen by critics and audiences, whether or not their controversial aspects and personalities have already put them behind the eight ball. Venice will help answer if audiences and pundits keep arguing about these movies all season long or if the fighting – and interest – will die out by the time they open wide for everyone else on September 23rd.

Will “Blonde” change the way we remember and talk about Marilyn or do far more harm than good to her legacy? And will “Don’t Worry Darling,” the movie, speak louder than all the gossip about Olivia Wilde, Harry Styles, Florence Pugh, and Shia LaBeouf? Either their Venice premieres will be among the last words on these subjects or spawn thousands more for months to come – as ominous as that might sound at this point.

Will this be a bounce-back year for artsy film festival favorites?

In all honesty, 2021 was a rebuilding year for artsy, critically favored darlings from fall film festivals. Between “The Power of the Dog” being the most acclaimed festival film by far, more crowd-pleasing fall festival films like “Belfast” and “King Richard” leading the race early on, and crowd-pleasing Sundance festival winner “CODA” stealing the whole thing late, it was the weakest year on the fall festival circuit – at least in terms of highly scored Best Picture contenders – in some time.

But with films like “Bardo,” “The Fabelmans,” “Women Talking,” “The Son,” “The Whale,” “TÁR,” and more premiering on this year’s circuit, and with early season festival favorites like “Triangle of Sadness,” “Broker,” “Decision to Leave” and “Living” getting a second look, hopes are high that there will be more than just one main artsy, critically championed across-the-board frontrunner from this fall festival season.

Will this year’s Best Picture be a fall festival premiere this time?
Last year was a rare season where the eventual Best Picture winner did not debut at one of the fall festivals. This spoke to “CODA’s” enduring power even after its very early Sundance premiere, the likes of “The Power of the Dog,” “Belfast,” and “King Richard” losing their power at the end, and the lack of depth in the rest of the year’s fall festival lineup.

Will order be restored this year, with the eventual Best Picture winner making its debut at Venice, Toronto, or Telluride once again? Or is this another year where we’ve already seen the eventual winner by now – in which case, it would likely either be “Everything Everywhere All at Once” or Cannes winner “Triangle of Sadness.” Or will this finally be the first award season since 2006 and “The Departed,” where the year’s Best Picture premieres after the fall festivals have concluded – which would likely favor Damien Chazelle’s “Babylon?”

Despite recent unconventional endings, conventional wisdom still holds that most of the year’s big Oscar winners will be launched, if not outright decided months ahead of time, in these next three weeks at Venice, Toronto and Telluride. Even last fall, these festivals are where previous year’s Best Director, Best Actor, Best Actress, and Best Original Screenplay were first unveiled, and never looked back from there.

Either way, there will be some critical answers coming from the shores of Venice, the mountains of Telluride, and the audiences of Toronto by this time next month – and from there, dozens of new questions that won’t be answered until March 12th, 2023 at the Dolby Theater.

So what do you think? Which films are you looking forward to from the fall film festivals? Please let us know your thoughts in the comments section below or on our Twitter account and be sure to check out the Next Best Picture team’s latest Oscar predictions coming soon on September 1st.