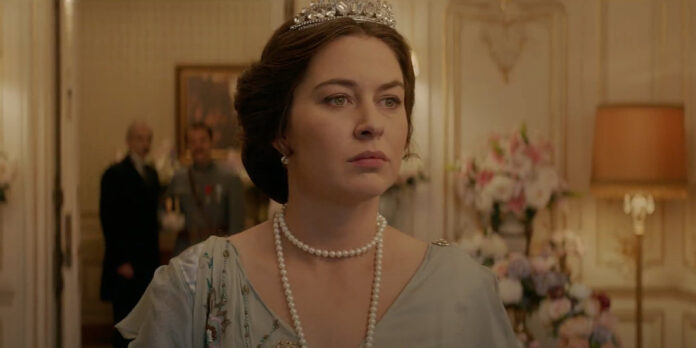 THE STORY – Queen Marie of Romania attends the Paris Peace Conference in the aftermath of World War I.

Even with my degree in history, I know little about the history of Romania. I certainly wasn’t aware that its government was attempting to unify Greater Romania at the end of World War I and fighting for international recognition of its expanded borders to include all Romanian speakers. Nor did I know anything about its Queen Marie, who attended the Paris Peace Conference of 1919 in hopes of gaining support from the Allied Powers for this unification.

But that true story is the focus of Alexis Sweet Cahill’s new film, “Queen Marie,” which is partially in English and partly in Romanian. The film opens and closes with information about Romania during and after the war, with actual film reel footage, to help contextualize it for anyone who is, like me, not well-versed in Romanian history.

The story begins in Bucharest as Queen Marie (Roxana Lupu) and her husband, King Ferdinand (Daniel Plier), prepare for her to go aid in the peace talks unofficially in hopes of influencing England, France, and America to support unification and send assistance to their country. The film gets caught up in the affair of her son, Prince Carol (Anghel Damian), and his anger at his mother being sent instead of him, which bogs it down a little.

But finally, the queen and her daughters are off to France, where the film picks up. We watch as Marie charms both the politicians and the reporters of first Paris and then London, even as she deals with family drama of her own. Marie meets with historical figures from George Clemenceau (Ronald Chenery) to David Lloyd George (Richard Elfyn) to Woodrow Wilson (Patrick Drury) before returning to Romania.

While the screenplay by Brigitte Drodtloff and Maria-Denise Theodoru does a great job at balancing Marie’s personal struggles and international politics, the dialogue is poorly written in places, perhaps because of how much switching between languages there is. There’s also one line in which Marie warns Lloyd George that the way that they are drawing lines in the Middle East will have consequences a hundred years later that feels very forced.

The costume and production design are highlights of the film, with lots of beautiful locations and intricate outfits, but it’s Lupu’s performance in the titular role that is the true standout. She exudes the grace and regalness of a queen but also allows a warmth to peek out in moments away from the spotlight. It’s an intense and intelligent performance that ensures that the audience never lacks faith in her abilities, even as those around her do.

“Queen Marie” is full of rooms of men yelling at each other and achieving nothing. The film points out how even powerful women are thwarted by the men who surround them without hitting the audience over the head with it. The filmmaking is more serviceable than remarkable, and the pace is slow, as it’s mostly people talking in giant beautiful rooms. But “Queen Marie” is an intriguing portrait of a determined woman struggling to hold both her family and her country together.