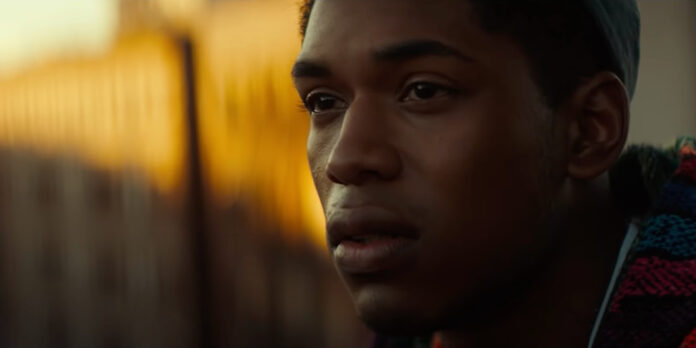 THE STORY – Steve Harmon is a 17-year-old honor student whose world comes crashing down when he’s charged with felony murder. He soon faces a complex legal battle that could leave him spending the rest of his life in prison.

​The call for a more diverse landscape of films that reflect on topical cultural sentiment has only intensified in the last few years. It’s an important moment that many talented storytellers have seized to expose many deep-seated issues plaguing society. This lens has lately turned to the Black community’s continuous trauma, particularly on the receiving end of the justice system. Such themes and ideas are explored in the new film “Monster,” and it aims to dive into this arena with a decent amount of commentary. Unfortunately, most of its discussions end up struggling to make this a totally engaging work, despite some other strong elements at play.

The film centers around young Steve Harmon (Kelvin Harrison Jr.), a seventeen-year-old student at a preppy high school in New York interested in filmmaking. His life is mostly unchallenged as he sees fit to analyze the world around him with an artistic perspective. However, that worldview is shattered when he is arrested due to his suspected involvement with an attempted robbery where the store clerk was killed. As the tortuous trial begins, the blatant biases against him in this system reveal themselves. As his public defender (Jennifer Ehle) tries her best to advocate for him, along with his parents (Jeffrey Wright, Jennifer Hudson), Steve can’t help but notice the uphill battle he must climb. It’s a journey of self-discovery that will move him to the core and fundamentally shift his views on all things he holds dear in his life.

There’s plenty baked within the text of this film that is ripe territory for exploration. How the American judicial system treats Black people, specifically young men and boys, has been a prevalent topic in the news and is worthy of dissection. The most effective methods are ones that aim for nuanced conversations, but such choices are unfortunately not made here. This is mainly felt in the script by Janece Shaffer and Colen C. Wiley, adapted from the novel by Walter Dean Myers. The blunt delivery of this story robs the potential of a more intriguing premise, not helped by overwrought narration that clings to a poetic delivery that comes across as stilted and awkward. The thematic journey of these characters feels muddled and broad and without a specified viewpoint. This results in a story that is competent but playing merely on the surface.

Many of these issues are also influenced by Anthony Mandler’s direction. The opaque analysis is not complemented by the overbearing filmmaking that resigns itself to obvious cinematic choices that, once again, emphasize the more overt examinations within the text. Clashing and inconsistent aesthetics only serve as a distracting nuisance, and the pacing never works with the structure to feel anything other than interminable. There is credit to be given in an improved second act, particularly as the courtroom tension is effectively played. It goes a long way to help fashion more emotional investment, but the film still struggles to create a compelling portrait of a somber character study.

Harrison does manage to command the central role quite well, and it’s yet another example of his towering achievements as an actor. While this is not the most accomplished performance he’s given, there’s a nice mixture of an internalized struggle fighting against the emotional outbursts he feels forced to express. The supporting cast is a mixed bag, with players like Ehle and Hudson not given the material to shine, though the former has a tad more to work with. Even though he shares little chemistry with this on-screen partner, there’s a grace to the quiet stoicism that Wright usually portrays that is impressive. The other peripheral characters range in their impact as well. Rapper ASAP Rocky has an inviting screen presence that makes him rather captivating to watch. The same can’t be said for John David Washington in the role of a gang member for which he feels completely miscast.

There’s no doubt that the subject matter being dissected in “Monster” is one of grave importance. It’s necessary to see such topics examined in a thoughtful manner that is illuminating to the culture. It is unfortunate that, despite such potential, nothing truly innovative is presented here. The story trades on concepts that are too broad, and that bluntness limits the heights of the storytelling. The nuances are shoved aside for obvious allegories that don’t deepen any understanding of a flawed and biased system, which leads to sluggish momentum and hollow characters. There are some decent performances here, and the courtroom tension in the second half is provocative. Still, the film ends up working more in theory than in execution and becomes a rather hollow exercise by the end.