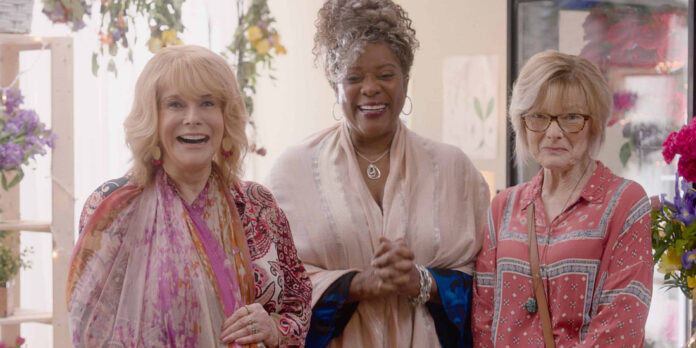 THE STORY – While her house undergoes repairs, fiercely independent senior Helen temporarily moves into a nearby retirement community, where she encounters lusty widows, cutthroat bridge tournaments, and a hotbed of bullying “mean girls.”

​​​​Michael Lembeck’s “Queen Bees” takes your typical “new girl who ends up in the mean girls’ clique” story and places it inside of a retirement home. With a script by Donald Martin, the film is a clever twist on an often-told tale and a fun, if tame, comedy.

Just about everyone in her life urges Helen (Ellen Burstyn) to sell her house and move into a retirement home. So, after an accident that causes the house to need extensive repairs, she temporarily moves into Pine Grove. But, just to spite her estranged daughter, Laura (Elizabeth Mitchell), she seems determined to dislike the place, despite it being a beautiful facility.

Pine Grove is full of fancy food and fun activities, from water aerobics to flower arranging. But it’s also home to a clique of women called the Queen Bees, who rule over Pine Grove ruthlessly. There’s even a classic scene where music plays as the “cool girls” walk into a room, and everyone stops and stares.

“This isn’t high school,” Helen protests at one point. “You’re right. It’s worse,” Sally (Loretta Devine), the nicest of the Queen Bees, tells her. However, after the alpha of the group, Janet (Jane Curtin), tells Helen she can’t join the bridge club, Sally recruits her to be her partner anyway, and the two become fast friends. Helen reluctantly gets involved with the friend group and Dan (James Caan), a widower determined to make her acquaintance. However, when she finds out that the house repairs will take longer than the month predicted, it’s clear that Helen can’t avoid getting wrapped up in the drama of Pine Grove.

Helen is your classic matter of fact, crotchety grandma character. (She certainly made me miss my own grandma.) A former teacher who loved ballroom dancing, she’s struggling to move on to a life without her husband. Her strongest bond is with her grandson Peter (Matthew Barnes), who she adores, which works well to soften the character for the audience. If Burstyn is a little over-dramatic at times, it reads more as a character trait than a flaw of the performance.

As is common in this sort of comedy, not all the characters are well fleshed out. We don’t learn much about anyone other than Helen, though there are some moments where the older characters reminisce about their past spouses. Janet and Sally’s girl group is rounded out by Margot (Ann-Margret), a bubbly woman who has had five husbands and is having current boyfriend issues with another man at Pine Grove.

The whole film has a bright sheen to it, but nothing to make it stand out stylistically from your average comedy. However, in terms of the script, the romance moves a bit too fast, the characters aren’t well fleshed out, and the story isn’t particularly impactful. But there are some genuinely funny moments and cute, heartfelt moments as the characters bond with each other. “Queen Bees” is a worthy enough addition to the very niche genre of films about elderly people, though it’s nothing especially noteworthy.