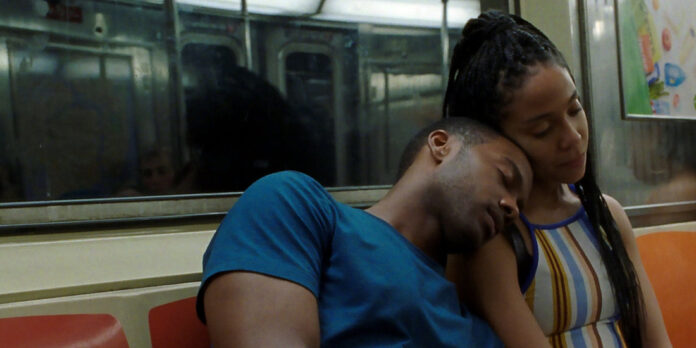 THE STORY – On a summer night in Harlem during her last months at home before starting college, 17-year-old poet Ayanna begins a summer romance with Isaiah, a music producer who has just moved to the city.

“Premature” is the latest film from director Rashaad Ernesto Green who developed the feature film from his award-winning short of the same name. The film follows two young lovers torn apart by a tragedy. On paper, “Premature” may sound like any other coming-of-age romantic drama, but Green manages to make this all too familiar narrative seem fresh and innovative. With a stunning performance from leading actress Zora Howard, who also co-wrote the script, “Premature” is a film that well and truly deserves our attention.

Howard plays Ayanna, a young aspiring writer who spends most of her days hanging around with her girlfriends. When we are first introduced to her, she’s on a subway train conversing with her friends, played by Alexis Marie Wint, Imani Lewis, and Tashiana Washington. The dialogue feels so natural and authentic that we forget that what we are watching is a film. The language is colorful and there is plenty of hilarious banter being exchanged. It seems so rare to see depictions of female friendship like this on the big screen, and both Green and Howard manage to present it in such a realistic way.

While hanging out at a basketball court, Ayanna meets Isaiah (Joshua Boone), an aspiring musician who is slightly older, and the two of them soon start hanging out. Their first date is a beautiful and tender scene that is captured in an intimate fashion by cinematographer Laura Valladao who uses close-ups and handheld cameras to bring us into this world. We are also given unique access to a side of New York City that often gets overlooked. During the course of the film we hear Ayanna’s inner monologue and her poetry, Howard (who became New York’s first Youth Poet Laureate in 2010) wrote all of Ayanna’s poetry and it helps to reveal so much about the character’s emotional state.

Ayanna and Isaiah have a passionate, whirlwind romance that spans a summer, but as their relationship develops and the summer comes to an end, reality hits them hard and Ayanna must make a life-changing decision. Without giving away too much information, there’s one devastating scene in which Howard delivers a powerhouse performance that captures the inner turmoil and pain her character is enduring. Everything about this scene plays out in a raw and naturalistic manner, edited in a quick succession of jump cuts by the film’s editor Justin Chan. The film ends on a cliffhanger that doesn’t feel forced or melodramatic in any way, and we reach this point in a natural conclusion. Green offers us some hope without having the characters utter a single word to each other.

It has been several years since Green’s last feature film, “Gun Hill Road” (2011), and to see him return to the big screen with the likes of something so powerful and moving as “Premature” is a triumph. The events of the film unfold in a slow, steady manner as we glimpse this relationship through the lens of a summer haze. Green and Howard’s love story between two young black people, and set in the backdrop of a Harlem landscape, is something that we, unfortunately, don’t see enough of. In an interview, Green says, “In the current cinematic climate, we viewed simply telling a young black love story as a radical act,” and that Howard and himself “paid close attention to what [they] both felt was missing in black cinema.”

The film’s sex scenes are dripping in eroticism, but are never too graphic in content, nor does the camera feel voyeuristic or intrusive. Perhaps this is down to the fact that it’s shot by a female cinematographer or the script is co-written by Howard (perhaps maybe a combination of the two). We focus on Ayanna’s facial expressions and we see the scene from her perspective. This is very much Ayanna’s story and it’s rare to see a female character enjoying a healthy sex life and not being depicted in a shameful fashion.

At times, the narrative edges close to cliche territory and melodrama, but it never crosses that line. The voiceover narration doesn’t exactly add much to the film’s plot, but Ayanna’s poetry is so well written and meaningful that it’s hardly an issue. The film’s supporting cast is strong, and it’s a shame that there aren’t more scenes between Ayanna and her mother (played by the wonderful Michelle Wilson). The film’s runtime is a lean 90 minutes, and often there are certain scenes which I wish had gone on for slightly longer.

With strong performances from its central leads, “Premature” is a modern-day romantic tale for Millennials and Gen Z. This is our “Love Story,” and honestly, it’s wonderfully refreshing to see such a realistic depiction of romance. I can only hope that we see more from Howard and Green because they’re both brimming with talent.

Powered by JustWatch
Share
Facebook
Twitter
Copy URL
Previous article
The Next Best Picture Podcast: Episode 182 – Best Oscar Wins & The NBP Film Community Nominations For The 2010s
Next article
“AND THEN WE DANCED”