“AND THEN WE DANCED” 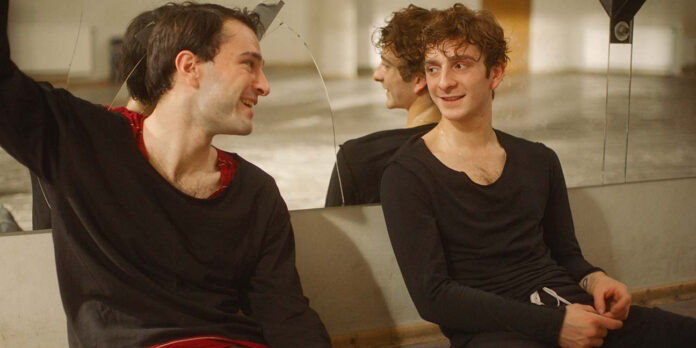 THE STORY – A male dancer and his partner have been training for years for a spot in the National Georgian Ensemble. The arrival of another dancer throws him off balance, sparking both an intense rivalry and romantic desire that may cause him to risk his future.
​
THE CAST – Levan Gelbakhiani, Bachi Valishvili & Ana Javakishvili

​Not enough gay dramas are dance films. Considering how many dancers are gay men, and how well the traditional dance movie maps onto the traditional coming-out drama narrative, it’s genuinely surprising how few gay dramas have used dance as the main part of their story. Thankfully, we now have “And Then We Danced,” a beautiful new gay romance from Levan Akin set in the world of a Georgian folk dance ensemble.

The world of folk dance, and the National Ensembles that perform them, is a particularly apt one to set a gay story since it’s a world in which male dancers must project a very traditional picture of masculinity: Strong, solid, and sometimes even brutish. This isn’t ballet where some level of grace is to be expected, but it’s a world just as bound by tradition. Merab (Levan Gelbakhiani, in a stunning debut performance) would do well in the ballet world where his natural softness would complement the style. But instead, he’s a member of a company in the National Georgian Ensemble, along with his more traditionally masculine brother. Despite his work ethic, the company director constantly hounds him for not just perfection in the dance steps, but for the masculine feeling, the performance demands. When Irakli (Bachi Valishvili), a new dancer with a rebellious streak, joins the company, Merab is attracted to his seemingly effortless masculinity – and also despises it. When Irakli offers some help in a semi-private practice session, the two begin to grow closer.

The subtext is easy to spot, but that’s not a hindrance to the film at all. Akin’s direction is gentle but intuitive, capturing all the ways in which a kindred spirit can become a part of your life: slowly and subtly at first, and then all at once. Gelbakhiani and Valishvili have fantastic chemistry, and watching their relationship grow is mesmerizing. Each delivers remarkably astute performances covering a wide range of emotions. Watching them watch each other within the context of the full ensemble is a case study in how to convey gay longing onscreen.

Georgia is a vehemently homophobic country – cinemas playing the film had to be protected from armed protesters by special riot police – so the mere fact that this film exists is quite something all on its own. But the real magic trick Akin manages to pull off is making a film so rooted in a very specific culture – not just Georgian culture, but their culture of dance – feel universal. Without ever pandering to the audience, the film shows us how Georgia represses its gay citizens, and how they manage to live in spite of it. The film’s narrative builds to an audition to join the main performance company of the Ensemble, and when the requisite final dance comes, it’s a true convergence of every plot and character point, making the moment densely layered with meaning. It’s a searingly emotional moment, triumphant in a low-key way that feels earned by the character and the filmmakers.

“And Then We Danced” moves to familiar plot and character beats, but every culture deserves a coming out story all its own; a culturally-specific take on established conventions. The film offers the people of Georgia a light in the dark and gives the rest of the world a window into a place they likely have no connection to. As the film shows, it’s sometimes those we have no connection to that can change our lives, and this beautifully-drawn Georgian tale will most definitely do the same.