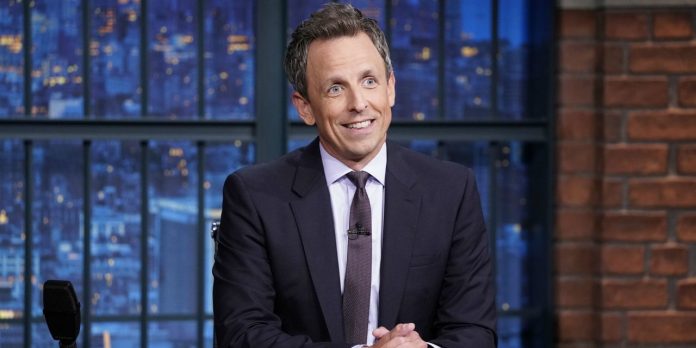 After diving into predictions for Comedy, Drama, and Limited Series races (and giving our final predictions for tomorrow’s nominations on the podcast), Next Best Picture breaks down Emmy contenders for the Variety Talk Series category. The category was born when the former Variety Series category split to allow more space for talk series and sketch series to thrive in their own corners. When The Daily Show with Jon Stewart won for ten consecutive years in a row, it made sense to provide breathing room. Since then, we’ve seen repeat showings from one series. But this upcoming Emmy cycle may just be the one to break the chain. Let’s dive in.

The Late Show With Stephen Colbert

After nearly four years on CBS, The Late Show with Stephen Colbert has really found its footing. After a fairly rocky start, Colbert has really eased into the seat once filled by the legendary David Letterman. But rather than impersonate Dave or continue as the same character from The Colbert Report, Stephen uses his platform to play the role of a more traditional host. Yes, he conducts standard celebrity interviews on weeknights, but he also gets at something deeper. He doesn’t shy away from our political reality and takes no prisoners in eviscerating the shameless Trump administration. Colbert walks a fine line between network talk show and political commentary. Yet he exceeds tremendously and has become a top network player as a result. If there were ever a year for Colbert to return to the Emmy stage, this is it.

Following three consecutive wins in the Variety Talk Series category, John Oliver may very well take home another prize for his weekly work on Last Week Tonight. His commentary remains informative and crucial, yet the bloom is slightly off the rose following five years on HBO. That’s not to say that Oliver’s show has diminished in any way, but the concept is not quite as fresh in a market over-saturated with relevant political content. A supporting role in The Lion King may provide the Britsh comic with a boost just in time for voting, but 2019 may be the year in which network late night emerges victorious.

Jimmy Kimmel remains a critical and a ratings darling for ABC. Like his CBS counterpart, Kimmel wastes no time in digging into the horrors of Trump’s America. In fact, he often goes deeper by connecting stories from America back to his family life. Such has been the case since sharing his son’s health struggles in 2018. Kimmel is clearly well respected, and the cavalcade of A-list talent that graces his stage only goes to prove it. Following sixteen years on air, two Oscar hosting gigs, and all around love, Jimmy’s time to receive some Emmy recognition ought to come soon.

When Samantha Bee first graced TBS with her political talk series Full Frontal in early 2016, the world was a very different place. Many of us were imaging a world in which President Hillary Clinton represented America as a shining progressive city on a hill. Instead, Bee does a terrific job in guiding us through our reality and finding light on the other side. But she doesn’t just make it about “you know who”. She tackles other pressing issues head-on and shows us how one issue impacts another from. Global warming and Me Too, to voting rights and LGBTQ issues, Full Frontal with Samantha Bee turns our range into laughter and a call for activism. A worthy nominee each year.

When James Corden first entered the late-night scene in early 2015, he was not a household name with American audiences. A Tony win, plethora of British supporting roles, and even a lead role in Into the Woods still left him outside of the mainstream. However, his 12:30 program really took off with his creative brand of humor that involves marathon games with celebrity guests, and of course, the ever-popular Carpool Karaoke. Corden’s celebrity stock has risen tremendously and seems to be at an all-time high. Following a recent Tony hosting gig and upcoming roles in film adaptations of Cats and The Prom, Corden’s place in the race doesn’t seem to be going anywhere anytime soon.

The Daily Show With Trevor Noah

To be perfectly honest, I still miss Jon Stewart. I miss his show, I miss his style, I miss his presence. When Trevor Noah replaced the longtime Daily Show host in 2015, doubts were cast about whether the enterprise could stay afloat. While I can’t particularly call myself a fan of Trevor Noah, he has carved out a niche audience that remains somewhat strong nearly four years in. His place in the race is no guarantee, but a first nomination last year bodes well for success again.

Other contenders to consider…

​Do you agree with the predictions? What do you think will get nominated for Best Variety Talk Series at the Emmys tomorrow? Let us know in the comments section below and be sure to stay tuned for our coverage of the Emmy race.