Reactions To The 2019 Emmy Award Nominations 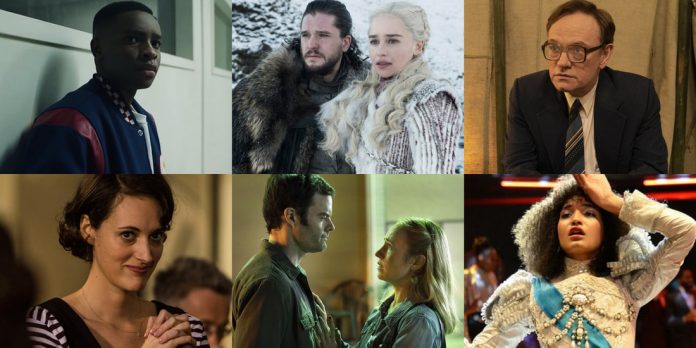 The 71st Primetime Emmy Award nominations were announced today. It was HBO’s day in the spotlight, leading any other network or platform with 137 nominations overall. Netflix accrued the second most nominations with 117. A week ago, Next Best Picture recorded a podcast with our predictions which you can listen to here.

As expected, HBO’s titanic achievement in “Game of Thrones” received the most Emmy nominations than any other show for the concluding season, with 32 individual nominations. Its total, series-wide settles in at 161. The most nominations the series ever received before today was 24 in 2015 and 2016.  “Game of Thrones” did especially well in the acting categories, most notably with four Best Supporting Actress and three Best Supporting Actor nominees.

A new era of Drama Series at the Emmys has been ushered in, as sophomore shows “Ozark” and “Killing Eve” each received nine nominations, significantly increasing their nomination totals from their first years, across the board in most qualifying categories. “Bodyguard” and “Succession” had decent showings today, both ending up with Best Drama Series nominations despite any acting mentions. Many are surprised Richard Madden did not make the cut for Best Actor.

Though the buzz was quieter this past year compared to the first two seasons, “This Is Us” defied the odds and held on strong, earning 10 nominations, most of which were in the acting categories.

A big surprise was Amazon’s “Homecoming” receiving only one below-the-line nomination. For a show on a new, hot streaming service, that’s highly stylized in its formal aspects (cinematography, editing, storytelling, etc.), and stars Julia Roberts, one of the biggest movie stars on the planet, this is quite shocking, especially since the show hit its marks with the Golden Globes six months ago. Roberts was snubbed for some of the best dramatic acting of her career.

Robin Wright withstood scandal and worsening reviews, managing her sixth acting nomination for playing President Claire Underwood on “House of Cards.” She now has the record of being nominated for every season of the series. Michael Kelley was also nominated for Best Supporting Actor, his fourth nomination for the show. Many speculated that the Emmys may want to move on from the show, but rather, these nominations show the Emmys shaking the hands of Wright and Kelley with respect as they conclude their show.

Viola Davis made a comeback for “How to Get Away with Murder” after missing the Best Actress in a Drama Series last year. This is a very difficult task to manage; once an actor is snubbed, they rarely are invited back into the lineup. Despite the heightened buzz, an open field, and a Television Critics Association nomination, Christine Baranski failed to make it across the finish line for CBS All Access’ “The Good Fight,” which was completely shut out. The Emmys are meeting CBS All Access with a brick wall of resistance.

HBO is a strong position to win Best Comedy Series with either its retiring mogul, “Veep,” or “Barry,” the fresher show that exploded with nominations today. “Veep” had a solid outing for its final Emmy ceremony with nine nominations, though it was surprisingly omitted for the directing lineup. “Barry” surprised everyone with 17 nominations this year, up from 13 last year. Amazon’s “The Marvelous Mrs. Maisel” is still in the running for top awards in its sophomore year, too, receiving a whopping 20 nominations in total. A crushing blow to fans of the idiosyncratic Amy Sherman-Palladino was her snub for in the category she won last year, Best Writing in a Comedy Series.

“Russian Doll” and “Schitt’s Creek” were both highly embraces for their first seasons, each breaking into Best Comedy Series. This is somewhat of a surprise for “Schitt’s Creek.” On the other hand, “The Kominsky Method” has an underwhelming morning, despite many anticipating a huge collection of nominations for the show.

Emmy superstars, Allison Janney in “Mom” and Lily Tomlin in “Grace and Frankie” were given the ax this year, after five consecutive nominations and two wins for Janney and four nominations for Tomlin. Goodbye industry favorites, you’ve served us well.

HBO continued its domination of the Emmy Awards with the Limited Series/TV Movie categories, where “Chernobyl” led with 19 nominations, while “Sharp Objects” and “Deadwood: The Movie” each received eight nominations, and “True Detective” nine nominations.

“When They See Us” was perhaps the biggest surprise, earning 16 nominations, with eight nominations in the acting categories alone. This is especially surprising because both Nash and Aunjanue Ellis made the cut in Lead Actress, both with minimal screen times, over bigger television names and larger roles, like Ruth Wilson and Julianna Margulies. Not only were voters able to see the series before they turned in their ballots, but they were also passionate about Ava DuVernay’s show, which many critics consider a masterpiece.

The competitive Limited Series category ended up being the five consensus shows: “Chernobyl,” “Escape at Dannemora” (receiving 12 nominations, including Ben Stiller for Best Directing), “Fosse/Verdon” (receiving daunting 17 nominations, which is an indication that this show means business and will likely compete for many category wins), “Sharp Objects,” and “When They See Us.” The copious amount of options did not deter the Emmys from throwing any surprises here.

After a smashing success with “Big Little Lies” and winning the award for Best Directing in a Limited Series two years ago, Jena-Marc Vallee was squeezed out of his early-released, more auteur work for “Sharp Objects,” as was “Gone Girl” writer Gillian Flynn and Marti Noxon for Best Writing in a Limited Series. Though “Sharp Objects” received twice as many nominations, including a spot in Best Limited Series,” Stephen Frears’ “A Very English Scandal” took spots in Best Directing and Best Writing, along with its two acting nominations.

On a final note, “The Handmaids Tale” is the gift that keeps on giving. Hulu submitted its three episodes leftover from last year’s cycle that didn’t qualify with the rest of season two and managing to secure 11 nominations.

The winners of the 71st Primetime Emmy Awards will be announced on September 22. The Next Best Picture team will release a podcast of our final predictions in the weeks before the ceremony.