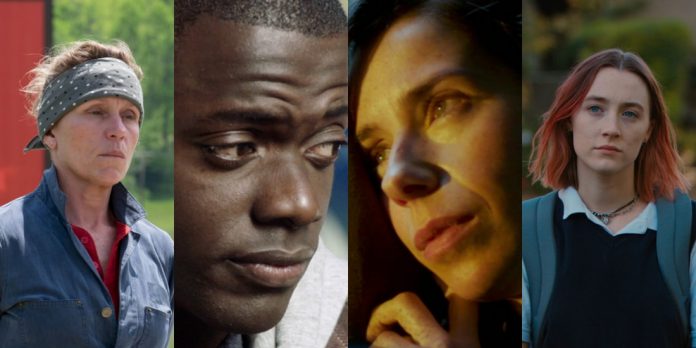 We have reached the finish line. You’ve read my predictions on the acting, screenplay, other best film, audio and visual categories for the 90th Academy Awards. Now, it is time to dive deep one last time into the categories of Best Director and Best Picture. One category is all sewn up while the other could not be any more unpredictable. Give it a look while I do my absolute best to predict what is going to happen in these two categories tomorrow night!

​Click below to see my analysis and predictions for these two categories.

Here are the nominees this year for Best Director…

​And here are the stats throughout the last few years for the Critics Choice, Golden Globes, DGA and BAFTA. 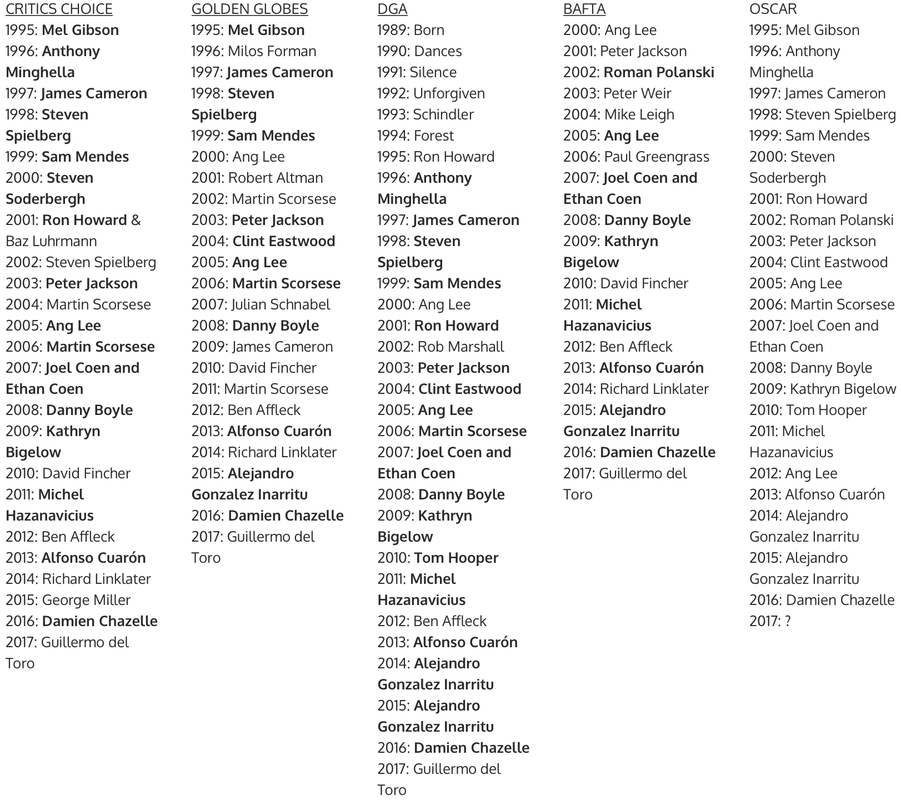 Make no mistake about it. Best Picture might be a question mark but Guillermo del Toro is going to win Best Director for his work on “The Shape Of Water.” No director has ever won Critics Choice, Golden Globe, BAFTA and the DGA and gone on to lose the Oscar. Guillermo del Toro will also join a very exclusive club of winners who have accomplished this in recent years including…

Had del Toro lost at BAFTA or the DGA to Christopher Nolan lets say for his breathtaking work on “Dunkirk” then we might have had a bit of a race on our hands here. But there is no race and there are no complaints. Guillermo is beloved and even if his film doesn’t win Best Picture, the most nominated film of the film will be walking away with this statue. 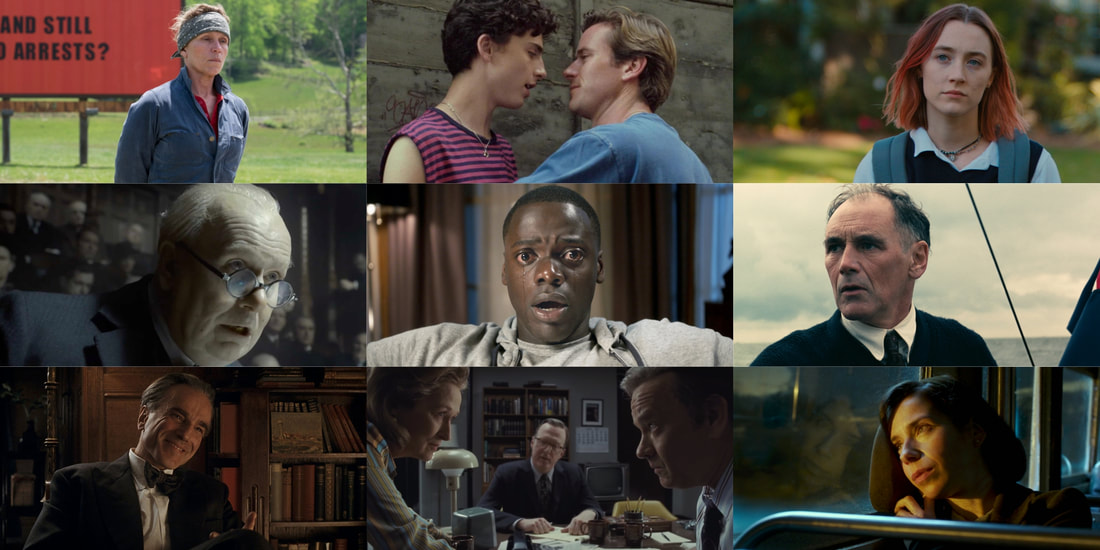 And now, finally, here are the nine nominees this year for Best Picture…

“Call Me By Your Name“
“Darkest Hour“
“Dunkirk“
“Get Out“
“Lady Bird“
“Phantom Thread“
“The Post“
“The Shape Of Water“
“Three Billboards Outside Ebbing, Missouri“

​And here are the stats for Critics Choice, Golden Globes, BAFTA, the PGA and the SAG Ensemble award… 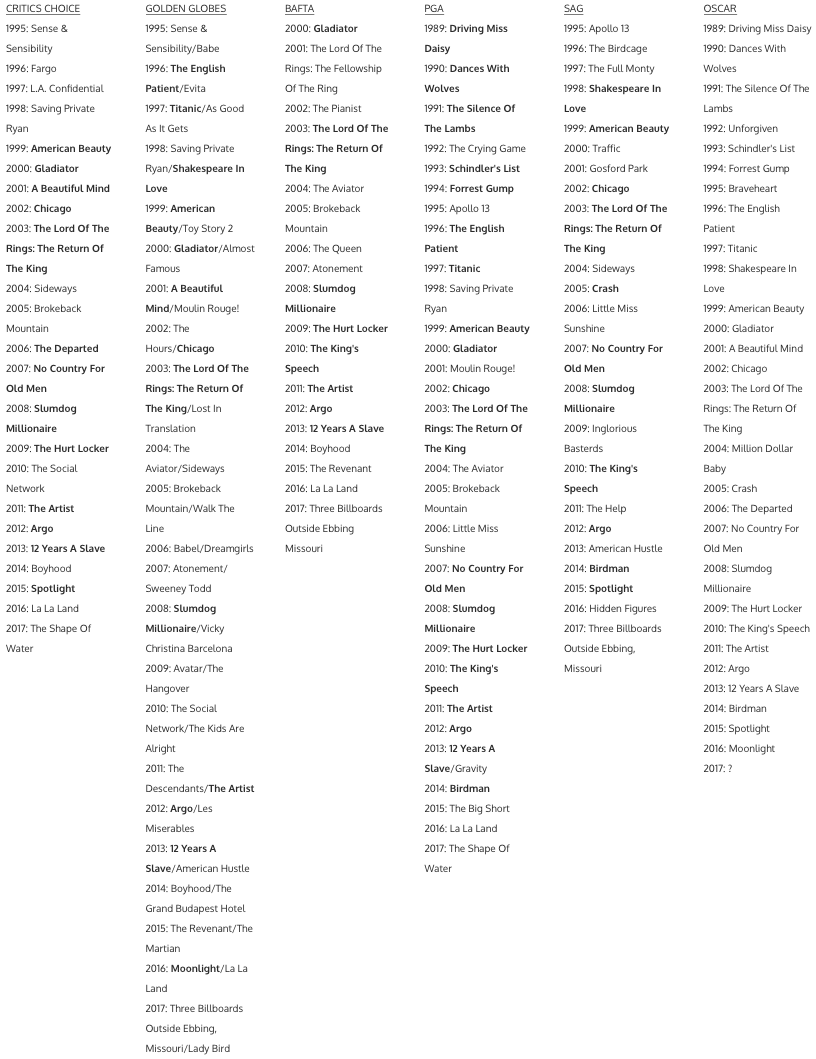 Most agree there are three films that stand the best chance to win Best Picture and those three films are “Get Out,” “The Shape Of Water” and “Three Billboards Outside Ebbing, Missouri.” Here’s what each film has won this season from the major awards…

“Get Out” – Too genre (Last horror film to win Best Picture was 1991 with “The Silence Of The Lambs” which also was the last film to win with a February release), no below the line nominations, no major precursor wins
“The Shape Of Water” – Too weird, no SAG Ensemble nomination, definitiely not going to win Screenplay
“Three Billboards Outside Ebbing, Missouri” – Too divisive, no Best Director nomination

Anyone who tells you they know what’s going to win Best Picture is lying to you. There are knocks against each film here and it’s virtually impossible to determine, even with stats, what’s going to win Best Picture under the preferential ballot. Under a plural ballot (Pre-2009) it becomes a little easier. But let’s see how the major precursors stack up both pre and post preferential ballot.

All together using the samples above, here is how everything works out…

The PGA still has the best success rate no matter what and the Producers Guild Of America went with “The Shape Of Water.” “The Shape Of Water” also won the DGA, which surprisingly has correctly correlated more to Best Picture since 1995 than Best Director itself with DGA matching with Best Picture 17/22 times (77%) and if you go back to 1989 it’s 22/28 times (79%). And when a film wins both the PGA and the DGA? 14/19 years (74%). The five years where a PGA/DGA combo winner did not win Best Picture was…

Taken all together the PGA/DGA winner matching up with Best Picture has happened 14/28 times (50%). This is all heavily tipped in favor towards “The Shape Of Water” winning the Oscar for Best Picture on March 4th. It also leads the Oscars this year in nominations which hasn’t mattered as much in recent years since the preferential ballot was re-introduced to the Academy. Only in 2010, 2011 and 2014 did the nomination leader still go on to win Best Picture. Funnily enough, these were also three years where each one of those winners also won the PGA/DGA. So, all signs from a stats perspective are pointing towards “The Shape Of Water” winning Best Picture and becoming the first film since “Braveheart” to do so without a nomination from the SAG Ensemble. And I know. I know. The past two years we have been in a similar situation where “The Revenant” led in Oscar nominations, also had a deadly combo of wins (GG/BAFTA for Best Film) and was guaranteed some wins walking in the door on Oscar night (Such as Actor and Cinematography). And last year, “La La Land” was even more impressive with PGA/DGA/GG/BAFTA wins, led in Oscar nominations and was guaranteed some wins walking in the door on Oscar night. However, both films did not have that dreaded SAG Ensemble Nomination which has year after year been the kiss of death for many films that looked like they had everything they needed to win. Will lightning strike for a third time?

For “Get Out” to win Best Picture without having won the Critics Choice Award, Golden Globe (Drama or Comedy), BAFTA, PGA or SAG, would surely be unprecedented. There have only been three years where the Best Picture winner (In the same provided above) won without any of those awards…

All “Get Out” has is the WGA for Best Original Screenplay and a DGA First Time Director Award for Jordan Peele. Yes, it has led in Critics Awards for Best Picture this season with 14 wins from various groups and has ran the gauntlent in Best Original Screenplay with 33 wins. Also working in “Get Out’s” favor is the fact that Screenplay is very closely tied with Best Picture. In the same provided above, one of the Screenplay winners has gone to the Best Picture winner ​20/28 times (71%). This also bodes well for “Three Billboards Outside Ebbing, Missouri” which has won the Golden Globe (Drama), the BAFTA for Best Film and the SAG Best Ensemble award. While the Golden Globes have zero membership crossover, the BAFTA and the SAG do. The Academy’s largest voting branch is the actors and the film is very well liked overseas versus in America where it’s clearly a love it/hate it movie. Is the backlash/controversy primarily an online thing? The way it has been winning awards lately, seems to indicate so. However, there are other factors going against Martin McDonagh’s film as well.

“Get Out” winning Best Picture is the least likely scenario from a stats perspective but on a preferential ballot level, it makes the most sense in that it has staying power (It came out in February last year and people are still talking about it), it was a huge box office success (The kind of thing Best Picture used to reward) and is the kind of film that most people could watch and still think very highly of. Is it a comedy? Is it a horror film? is it a social commentary? Who cares! Because it crosses over so many boundaries and genres, it has a tremendous wide appeal that can propel it to a win. However, one final stat working against it is that it does not have a single tech award nomination below the line. It would be joining a very small list of films to achieve this stat including: “The Broadway Melody” (1928), “Grand Hotel” (1932), “It Happened One Night” (1934), “Annie Hall” (1977) and “Ordinary People” (1980). It would be more like “The Broadway Melody” and “It Happened One Night” though in terms of wins leading up to the Oscar which was practically nothing because most if not all of these other major awards did not exist back then. Even “Annie Hall” and “Ordinary People” each won the DGA, acting awards and other Oscars outside of Screenplay such as Best Director. And you all thought “Moonlight” had less stats working in its favor last year. Now watch “Lady Bird” or “Call Me By Your Name” go on to win Best Picture. Honestly, with this year in particular, anything can truly happen. I could go on and on and throw even more stats at you but I’ve never been so much of a gut feeling kind of person when it comes to predicting and like “The Revenant” and “La La Land” the previous two years, I expect my stats will fail me and I’ll be wrong again.

And that’s it. Those are all of my predictions for the Academy Awards tomorrow. You can read my predictions on the acting, screenplay, other best film, audio and visual categories or just check out the summary below.

My team’s predictions can be read here and our predictions can also be heard on the podcast here. Also be sure to enter into our contest to predict the Academy Awards here. Lastly, I want to thank each and every one of you who have continued to help support Next Best Picture through this amazing awards season. The coverage will not stop after tomorrow though for 2019 is already in full swing and we have a lot to look forward to as the year moves on. It truly never ends.

Which leads me to my next point….no matter what happens tomorrow, don’t take it personally. I have learned the hard way what happens first hand when you allow yourself to get too emotionally in the Oscars and the results are not pretty. I found so much more peace when I stuck to straight up predicting instead of actively rooting for or against something. While I understand that may not work for some of you, if you find yourself getting too angry/upset or even crying over tomorrow’s results, maybe give a more unbiased approach a try next year? Just a thought.

In any event, thank you once again and enjoy the show!