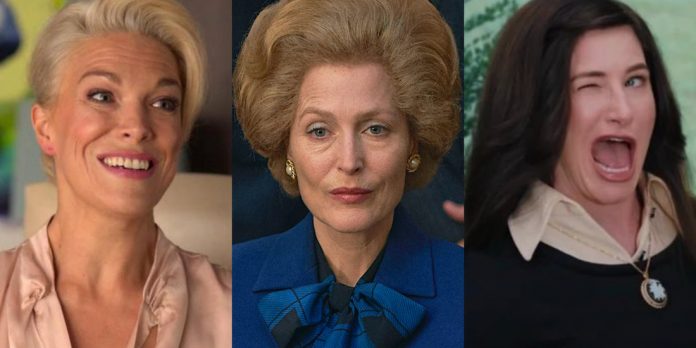 If you remember from last year’s Emmys and my Golden Globe, SAG Awards, and Oscars predictions, I try my best to leave emotion out of making my predictions. I’m going to take you television fans through how to make your Emmy predictions and win your pool methodically. Next up in this series of articles is Outstanding Supporting Actress in a Comedy, Drama, and Limited Series/TV Movie.

Six years ago, the Emmys moved to a plurality vote replacing the more level playing field of 80-100 person panels ranking the nominees. Since we spend more time watching television than a film, it’s easier to let our personal preferences affect our predictions as we try to manifest a win for our favorites.

The acting categories are where stats can only take you so far – instinct and buzz also matter. Let’s take a look at how to predict the winners for Outstanding Comedy, Drama, and Limited Series/TV Movie Supporting Actress. A trend in the Supporting Actress races has emerged across the board. Can the frontrunners be stopped? These races have such a clear frontrunner that I will not be taking you through how to make your predictions methodically. Instead, we will look at the pros and cons of the frontrunners along with those who will try to spoil their party.

We’ll be looking at these races based on the strength of the frontrunner—most like to win to most likely to be upset.

Anderson’s performance as Margaret Thatcher, The Iron Lady and first female Prime Minister of England, has proven unbeatable. So far this year, Anderson has won a Golden Globe, SAG Award, and Critics Choice Award. It’s Anderson’s SAG Award that’s most important, not just because her peers decide it but because she was the choice over her two lead co-stars Olivia Colman and Emma Corrin. When Anderson wins, she’ll make history as the first person to sweep: Globe, SAG, and Emmy Award for two different series, as she accomplished this feat for “The X-Files” in 1997. Sometimes, I hate when I’m right, and Bonham Carter is definitely that exception. Like many, I expected Bonham Carter to win the Emmy in this category for her heartbreaking performance as Princess Margaret, but that was not to be. I also predicted that to be her best chance as she’s unfortunately been eclipsed by Anderson. The rest should just be happy to be amongst the nominees.

This should easily be Waddingham’s first Emmy victory for her fierce portrayal of Rebecca, the owner of the Richmond Football Club. Waddingham has picked up the Critics Choice Award but was snubbed by the Golden Globes and SAG Awards. These snubs should be only minor hiccups on her path to Emmy glory. That is as long as “Hacks” isn’t about to play spoiler and Einbinder steals her trophy. Einbinder is acting royalty; her mother Laraine Newman was one of the original cast members of “Saturday Night Live” and a past Emmy nominee, and her father Chad Einbinder has appeared in everything from “Dr. Doolittle,” “Arrested Development” and “Grey’s Anatomy.” Typically, Einbinder may have been more of a threat since her series started airing closer to voting but, “Ted Lasso” has just begun airing season two, giving voters a new look at Waddingham’s hilarious performance.

Why is Hahn the most likely of the frontrunners to be upset? It’s simple: she’s playing a Marvel Villain in a series that mostly takes place in sitcoms throughout the decades. But, there isn’t a winner as comedic to win in Emmy history—this category likes its drama. If not Hahn, then who? Next on the list are the ladies of “Mare of Easttown,” each with their own pros and cons. For Smart, she is expected to win Lead Actress in a Comedy for “Hacks,” so they may want to spread the wealth around, but on the pro side, she does have a lot to do throughout the series, and given the performances are night and day they may not feel bad about sending her home with two trophies. Also helping Smart is that this is her third nomination after previously being nominated for “Fargo” (2016) “Watchmen” (2020), and the academy may feel it’s time to award her for her work in Limited Series. Nicholson gives a heart-wrenching, memorable performance, but the con is you have to wait till the last half hour of the final episode to see this performance. Should Nicholson and Smart split the vote, and Hahn’s not the voter’s choice, this could give Goldsberry a chance to steal the prize. But Goldsberry has already won a Tony and Grammy Award for her performance in “Hamilton.” The Television Academy has had no problem nominating performers for their Tony-winning roles. They just typically don’t win an Emmy: Bryan Cranston (“All the Way,” 2016); Audra McDonald (“Lady Day at Emerson’s Bar & Grill,” 2016); Cicely Tyson (“The Trip to Bountiful,” 2013) Phylicia Rashad (“A Raisin in the Sun,” 2004); and McDonald (“A Raisin in the Sun,” 2004). If this category is going for a considerable upset, look no further than Ingram, who co-stars in the expected Limited Series winner—”The Queen’s Gambit.” If you’re looking to make a bold prediction in one of the Supporting Actress races, Limited Series/TV Movie is the category to do so.

Do you agree or disagree with my logic? What are you predicting to win the Emmys for the Outstanding Supporting Actress in a Comedy, Drama, and Limited Series/TV Movie categories? Let us know your thoughts in the comments section below or on our Twitter account. Stay tuned for more articles on the Emmys as I finalize my predictions for the 2021 Emmy Awards taking place on September 19th.