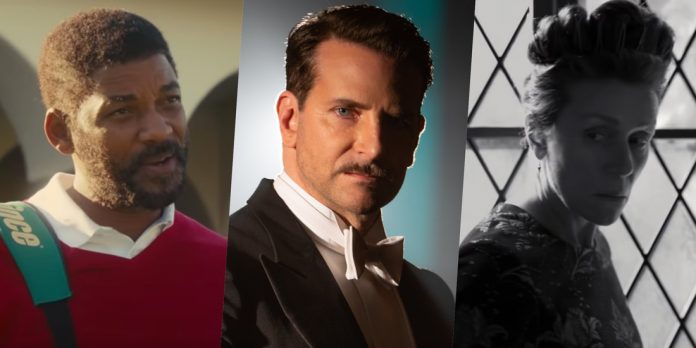 ​Every so often, you’ll be scrolling through someone’s IMDB profile and see something like “Oh, Owen Wilson is an Oscar nominee? I don’t remember that” and then click on it and discover that yes, Owen Wilson was in fact nominated for an Oscar, not for acting, but for co-writing “The Royal Tenenbaums.” See also Oscar nominee Lars Von Trier, courtesy of an Original song he penned for “Dancer in the Dark,” Oscar nominees Sean Astin, Jeff Goldblum, and Peter Capaldi for the short films they directed, and Oscar nominee Danny DeVito for producing “Erin Brockovich.” Actors and directors are nominated for Oscars all the time for categories you don’t associate them with. Those additional nominations in categories like Best Picture and Best Adapted, or Original Screenplay is how Bradley Cooper went from “that guy from “The Hangover” movies” to an 8-time Oscar nominee in less than a decade.

This year, we’re looking at a slew of potential new additions to the club of “people who have Oscar nominations for categories you don’t associate them with.”

Riz Ahmed – Best Live Action Short for “The Long Goodbye”
Riz Ahmed snagged his first Oscar nomination last year in exactly the category you would associate with him: Best Actor for “Sound of Metal.” This year, he’s looking at potentially his second nomination, but this time for a live-action short film he wrote and starred in. Traditionally, the nominees for Best Live-Action Short consist of the director and producer. Still, the Academy’s rules give the submitting short films some discretion as to who to place on the ticket. 2014’s Best Live Action Short winner “The Phone Call,” for example, opted to submit the short’s co-writer as a nominee. Although Ahmed did not produce nor direct the film, since the film describes itself as “co-created by Riz Ahmed” in its credits and marketing, Ahmed’s role is clearly a significant one, which means he will likely end up on the nomination ticket. Thus, Riz Ahmed could easily end up this season as “Two-time Oscar nominee Riz Ahmed” or maybe even “Oscar winner Riz Ahmed.”

Joel Coen – Best Film Editing for “The Tragedy of Macbeth”
Joel Coen has been nominated for fifteen Oscars. Curiously, two of those were for Best Film Editing for “Fargo” and “No Country For Old Men.” Of course, you wouldn’t know he edited them by looking at those films’ credits since both cite “Roderick Jaynes” as the editor. Jaynes, of course, does not exist and is instead, famously, the pseudonym for Joel and Ethan Coen whenever they edit their films. Although the official nominee lists cited Roderick Jaynes as the nominee, IMDB and the Academy recognize the actual nominees as Joel and Ethan Coen. For “The Tragedy of Macbeth,” Ethan did not help edit the film. Thus, Joel operated under the new pseudonym of “Reginald Jaynes.” Coen might end up with his sixteenth nomination if he is nominated for Best Adapted Screenplay this year. But he, maybe, can even receive a seventeenth for Reginald Jaynes’ first editing rodeo as well.

Bradley Cooper – Best Picture for “Nightmare Alley”
As mentioned above, Bradley Cooper is one of those individuals who has rapidly accumulated a tremendous number of Oscar nominations in a short time because of his involvement in other aspects of the filmmaking process. Of his eight Oscar nominations, only four are for acting. The others are for his producing work on Best Picture nominees “American Sniper,” “A Star is Born,” and “Joker” and for writing “A Star is Born.” This year, Cooper could potentially add a ninth nomination to that count for his performances in either “Licorice Pizza” or “Nightmare Alley.” Suppose he is not nominated for either performance. In that case, however, he could still end up with nomination number nine if “Nightmare Alley,” for which he received a producer credit, is nominated for Best Picture.

Jason Schwartzman – Best Original Screenplay for “The French Dispatch”
Jason Schwartzman has been a long staple of Wes Anderson films as an actor, but he has never been nominated for them. However, with this year’s “The French Dispatch,” he has been seemingly following in Oscar nominee Owen Wilson’s footsteps by writing as well as starring in one of Anderson’s vehicles. He is one of several writers on the film and ended up with only a “story by” credit, but that is sufficient for AMPAS rules to receive a nomination if the film gets in for Best Original Screenplay. This year, the category is packed, but the writer’s branch loves Wes Andrson. Maybe he gets in and brings Schwartzman along for the ride for his first Oscar nomination.

Amandla Stenberg – Best Original Song for “Dear Evan Hansen”
“Dear Evan Hansen’s” Oscar prospects seem non-existent in most categories. Universal didn’t even bother listing any categories besides Best Original Song and Best Sound on its For Your Consideration website. Still, one of the film’s few high notes was its new original song “The Anonymous Ones,” written by Amandla Stenberg, who starred in the film, alongside “La La Land” Oscar winners Benj Pasek and Justin Paul. Stenberg recently impressed as the lead in 2018’s “The Hate U Give” but failed to get much awards traction from it. I wouldn’t mind seeing Oscar nominee Amandla Stenberg as a make-up nomination for that oversight.

Matthew Vaughn – Best Original Song for “Silent Night” and “The Kings Man”
Best known for directing films like “Kingsman,” “Kick-Ass” and “X-Men: First Class,” Matthew Vaughn has quietly been venturing into songwriting as well. He recently entered into a joint venture with Warner Music entitled “Marv Music” to keep providing music for films. His first two musical efforts are both eligible for Oscars this year. One, “Measure of a Man,” is featured in his own movie, “The Kings Man,” but the other is an infectious Michael Buble Christmas tune written for “Silent Night,” starring Kiera Knightley, Matthew Goode, and Roman Griffin Davis. It’s an insanely catchy tune that, with the right campaign, could make Oscar nominees out of Michael Buble, Lorne Balfe, and Matthew Vaughn.

Are there any other people who could end up with Oscar Nominations in unusual categories? Which of these would surprise you most? Let us know your thoughts in the comments section below or on our Twitter account.