Portrait Of Women In Love: Lesbian Romance In Period Drama 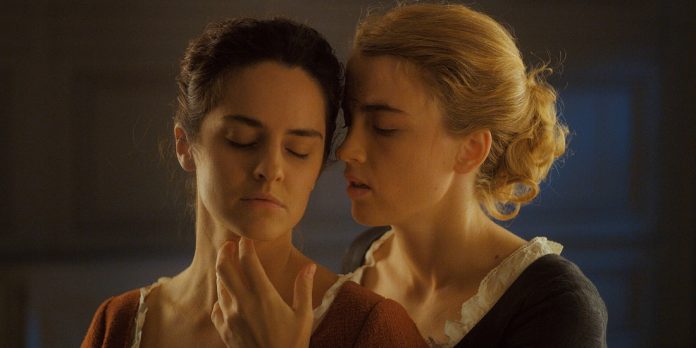 ​Last year’s “Portrait of a Lady on Fire” and “Elisa & Marcela” are two examples of period dramas that feature two women in love. In past years, there has been a growing number of period films that depict lesbian relationships, some more explicitly than others. Of course, we’ve seen this in films for many years, notably in “The Color Purple” (1985) (though Celie and Shug’s relationship is toned down from the novel the film is based on). Period television shows have also portrayed lesbian relationships; from the BBC’s 2002 miniseries, “Tipping the Velvet,” to the recent hit “Gentleman Jack”. But the popularity of films like “Carol” (2015) and “Portrait of a Lady on Fire” have made it abundantly clear that there seem to be more period films that center around a lesbian relationship that make it into the mainstream conversation than any other genre.

Certainly, a part of the reason for this is that films have allowed us to rewrite the narrative around queer women throughout history. Many of these films are based on actual historical figures, some of whom have had their sexuality left out of the conversation. Period dramas are a genre of film that has often catered to and been consumed by a female audience. It makes sense that a female audience would want to see more inclusive stories.

The understanding of sexuality was different throughout history than it is today, and many of the women depicted in these films wouldn’t have known the words “lesbian” or “bisexual” to describe themselves. Lesbians weren’t often persecuted under the law in the same way that gay men were because it was easier to hide their relationship under the guise of close female friendship. Because of that, these films are often less focused on discrimination than films about gay men in history. It’s more the social constructs of the time that keep the lovers from a happy ending than explicit homophobia. (Although there are still exceptions, for example, “Tell It to the Bees”.)

Sometimes these films have a solid basis in known fact, whereas others are more inventive. Historians have read into Queen Anne’s relationship with Sarah Churchill, which is portrayed in “The Favourite” (2018), and there were rumors, even in her own time, that Lizzie Borden was a lesbian as seen in “Lizzie” (2018). This year’s “Shirley” depicts a brief dalliance between author Shirley Jackson and another young woman, but there’s little knowledge of Jackson having been lesbian or bisexual. These films expand upon rumors and historical questioning to imagine something that certainly could be historically accurate but never made its way into the literature.

Other films are based on more solid factual evidence and records from the time: “The Secret Diaries of Miss Anne Lister” (2010) is based on the real Anne Lister’s diaries which detail her lesbian relationships; and provided the basis for the television show, “Gentleman Jack”; Virginia Woolf and Vita Sackville-West’s relationship is well-documented through their letters to each other and lines from these letters are included in “Vita & Virginia” (2018); Similarly, French author Sidonie-Gabrielle Colette’s relationships with both Georgie Raoul-Duval and Mathilde de Morny (or “Missy”) are depicted in “Colette” (2018). These films change the narrative around the historical figures they depict and remove decades of straightwashing.

While the inclusion in these films is commendable, it’s necessary to note that most of these lesbian period dramas center around white women. (The historical drama is an overwhelmingly white genre, which is an issue itself.) Nia Tucker wrote an article for Film Daze that addresses how audiences need to see greater diversity in this type of film before it can be truly inclusive. However, there are a handful of commendable period dramas that depict lesbian relationships between BIPOC women including “Bessie” (2015), “The Handmaiden” (2016), and “The World Unseen” (2007).

So why has there been this rise in period dramas portraying lesbian relationships as opposed to films set in the modern era? There certainly are contemporary films with lesbian and bisexual characters, like “Disobedience” (2017) and “Booksmart” (2019), but there aren’t as many that fall into any one category. I can’t pretend to have the full answer to this. Are historical lesbian romances considered more palatable to the audience? Does it feel better to watch a film in which the romantic leads contend with a society that’s structured to consider marriage only between a man and a woman rather than the prejudices of family and friends? What does it mean if we only ever see forbidden lesbian romances onscreen?

Later in 2020 (or perhaps 2021, thanks to the pandemic), we have several period films with lesbian relationships to look forward to: The highest-profile project is certainly “Ammonite” starring Kate Winslet and Saoirse Ronan, but there’s also “Summerland” which premieres at the end of July. Its trailer hints at an interracial lesbian relationship between Gemma Arterton and Gugu Mbatha-Raw’s characters against the backdrop of World War II. Hopefully, the trend of period dramas depicting a range of relationships will continue. But while we can celebrate a genre that caters largely to women, becoming more diverse in one way, it’s also important to recognize the other ways in which the film industry can still improve in its representation.

Share
Facebook
Twitter
Copy URL
Previous article
The Fight Isn’t Over: Politically-Minded Queer Films For Pride
Next article
​Looking Back On “Dark Phoenix”: A Culmination Of A Decades-Long Franchise