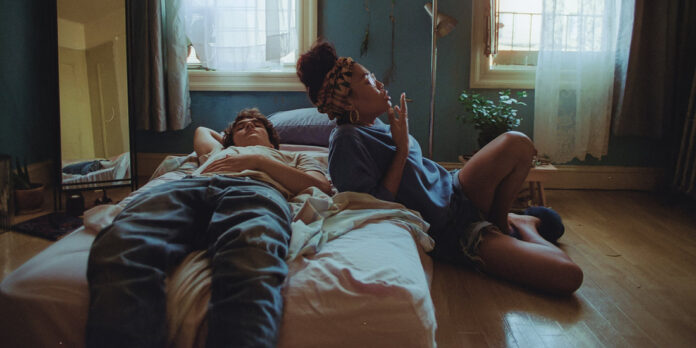 THE STORY – Kicked out of his home in Pennsylvania, Paul travels to New York City and finds romance with a woman who, unbeknownst to him, is transgender. As they start to learn more about each other, Paul’s lies and double life begin to surface.
​
THE CAST – Fionn Whitehead, Leyna Bloom, McCaul Lombardi, Devon Carpenter, Eddie Bloom & Louisa Krause

​”Port Authority” has elements we’ve seen before, but it manages to put a meaningful spin on them. The unlikely romance between Paul (Fionn Whitehead) and Wye (Leyna Bloom) is given a spike of intrigue because it’s Paul, the straight, white Midwesterner, who is made to feel like an outsider. He lands in New York City with no money or connections, and he stumbles upon Wye’s world of ballroom dance by chance. She’s a transgender woman who is leery of Paul’s bigotries, but she ultimately falls for his earnest charm, and together they brace the baggage of their lives.

The film is written and directed by Danielle Lessovitz, a New York-based artist who wastes little time establishing her setting. The opening scene finds Paul trying to ask strangers for information, but none of them give him the time of day, much less acknowledge him. This is not the Big Apple of “Annie Hall” (1977) or “When Harry Met Sally…” (1989); this is an unforgiving place where idiosyncrasies and individuality only put you at risk. Paul ascertains as much in the next scene, where a group of subway passengers bloody him and try to steal his phone. He’s rescued in the nick of time by Lee (McCaul Lombardi), a chatty local who gives him a place to sleep.

It’s telling that Paul gravitates towards Lee, who is a straight white man like him. The comfort of their friendship is contrasted by Paul’s visit to a ballroom performance, where one of the attendees belittles his presence. “You see that whole big city you got out there, that sh* t’s for you,” the attendee explains. “This sh*t right here is for me.” The statement lingers over the rest of the film as Paul is increasingly drawn to people and places that challenge his worldview. Last seen in “Voyagers” earlier this year, Fionn Whitehead does an excellent job of communicating Paul’s uncertainties. He doesn’t say much, but his restless demeanor and his fixed look of concern give the character depth beyond the page.

Better still is Leyna Bloom, who contrasts Whitehead’s nerves with hard-earned confidence. Her character is the one who makes the first move, who offers her phone number, and who, ultimately, pushes Paul out of his comfort zone. One of the film’s most crucial scenes occurs when Paul discovers that Wye is transgender. He rants about not wanting to be seen as a “chaser,” but she points out that other people’s opinions are immaterial when you’re with someone you care about. Bloom’s delivery is heartfelt beyond belief, and given the struggles, she’s likely had to contend with off-screen, it carries enormous weight. Paul agrees with Wye, but the discomfort in his acquiescence is palpable. Try as he may, he still cares about what others think.

Between the charismatic leads and the wonderfully grimy aesthetic, “Port Authority” has a lot going for it. Sadly, the film is let down by its script, which is riddled with clunky dialogue and vague motivations. Paul and Wye’s initial meeting is charming because Whitehead and Bloom have great chemistry, but some of their banter feels like it was pulled from a student film. Too often, the characters strive for poeticism and come up short, and while not present in every scene, these clunky exchanges have a cumulative effect on the viewer. I wish the script had gone through a few more drafts before the cameras rolled.

There is also the matter of Paul’s transformation. His reluctance to share Wye with the rest of the world causes a rift, and their relationship falls apart. It’s unsurprising, but it makes sense given the screen time that had been spent building it up. Paul’s fascination with ballroom is less evident, which is teased early on but then mostly abandoned for the second act. The film then returns to the ballroom in the final act, where Paul has decided to embrace it wholeheartedly. Lessovitz’s script makes it unclear whether Paul associates ballroom with Wye and is therefore drawn to it, or if he was fascinated with ballroom all along, and his romance with Wye was merely incidental. The film does little to distinguish these two elements, and as a result, they end up blurring and coming across as underdeveloped.

“Port Authority” is a solid directorial outing by Lessovitz as it shows a clear command of style and setting. The performances are uniformly good, but they would have been even better had they not had to contend with an inconsistent script and a relatively underwhelming climax. It is a flawed effort that’s still worth checking out for its virtues.