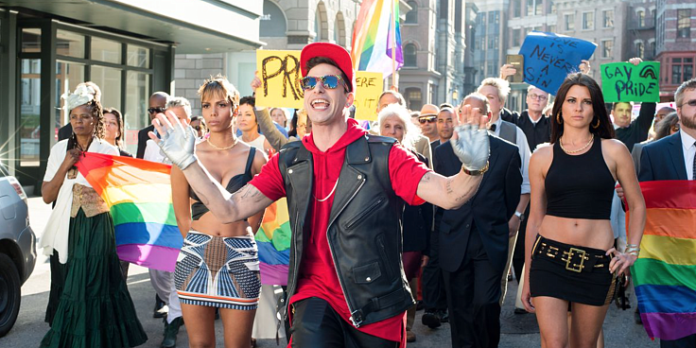 THE STORY – Childhood friends Conner (Andy Samberg), Owen (Jorma Taccone) and Lawrence (Akiva Schaffer) found fame and fortune after forming the hip-hop group the Style Boyz. Owen and Lawrence faded into the background when frontman Conner left the band to launch a successful solo career. Now, the egotistical singer decides to film a documentary about his life while he’s still on top. When his second album flops, the camera is there to capture his world come crashing down.
​
THE CAST – Andy Samberg, Jorma Taccone, Akiva Schaffer, Sarah Silverman & Tim Meadows

Nobody is safe from The Lonely Island. Now, they are tackling the very industry which they are a part of in “Popstar: Never Stop Never Stopping.” It’s a mockumentary that is just the right mixture of believable yet outrageous in its depiction of the music industry. And at an incredibly generous 86 minute running time, the film whips on by at a rapid pace ensuring that the laughs “Never Stop Never Stopping.”
​
​Long time childhood friends Conner (Andy Samberg), Owen (Jorma Taccone) and Lawrence (Akiva Schaffer) found early success forming a musical trio known as the Style Boyz. However, Conner wanted to stand out more than his two friends and slowly became the breakout star of the group luxuriating in a life of celebrity culture. Now Owen is regulated to being nothing but Conner’s on stage DJ and Lawrence has decided to leave the group and city altogether, regulating himself to a life of solitude. Conner’s solo career has a promising beginning which results in him wanting a documentary to be recorded following his everyday life. However, with the release of his second album known as Connquest, his career and life start to take a sharp downturn as the reception to the album is harshly negative. And now the cameras are rolling to capture Conner’s reaction to all of the critical backlash.

While I can safely admit that my own expectations were low, “Popstar: Never Stop Never Stopping” surprised me with its energy and biting satire of not only the music industry but celebrity culture as a whole. Seeing all of these “yes” men that follow Conner around and try to convince him that his second solo album isn’t a complete failure and how he can bounce back from it is not too far away from how it really goes down within the industry. Conner is that ultra popstar celebrity whose personality is dialed up to 100. His actions, his thought process, and his loyal crew all come together to create a film that is consistently entertaining and outrageously funny.

Andy Samberg is perfectly suited for the role as Conner. Taking the Justin Bieber formula and blowing it out of proportion results in the perfect mix of actor and role that Samberg could’ve asked for. His cockiness, musical talent, and vulnerability all shine through here, but he’s not alone. The film employs a vast amount of celebrity cameos and SNL stars to back up Samberg including Usher, Simon Cowell, Bill Hader, Tim Meadows, Sarah Silverman and much more. But this is Akiva Schaffer and Jorma Taccone’s movie. Just as in real life, the film illustrates how well these three talented individuals work together to create a piece of entertainment for a mass consuming audience. Their SNL skits, The Lonely Island albums and now their movies. Every field of entertainment which they touch, they leave their mark on. It certainly helps that “Popstar: Never Stop Never Stopping” incorporates brand new Lonely Island songs into its narrative which even after 15 years of writing and performing together are still finding interesting topics to write about which consistently make us laugh out loud. Akiva Schaffer, in particular, has really outdone himself as a director with this film, incorporating many different filmmaking elements and shooting styles to present a mockumentary that never loses its tone nor its ability to make us laugh hysterically.

I was not a fan of “Hot Rod” upon its release in 2007, I did not even like Akiva Schaffer’s follow-up film “The Watch.” “MacGruber” was directed not by Schaffer, but by Jorma Taccone and that film was average at best. However, their collaborative effort along with their good friend Andy Samberg results in a fresh, insightful and thoroughly funny look at the music industry and celebrity status resulting in my favorite film either one of these three men have been a part of. “Popstar: Never Stop Never Stopping” will have its detractors for sure (If you’re not a fan of The Lonely Island’s music, this will probably not be the film to convert you), but for all of its wild gags and offensive humor, this trio of talented friends have turned me into a believer of their work on the big screen.