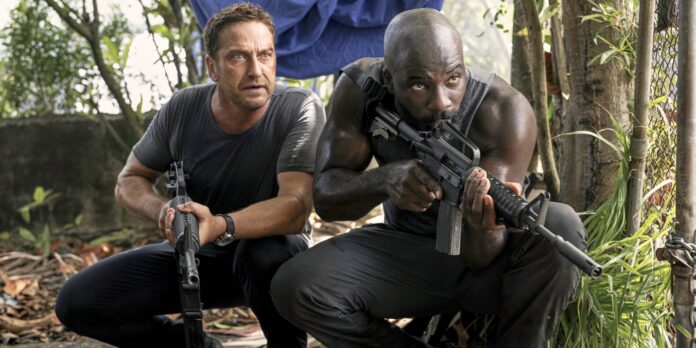 THE STORY – Pilot Brodie Torrance saves passengers from a lightning strike by making a risky landing on a war-torn island — only to find that surviving the landing was just the beginning. When dangerous rebels take most of the passengers hostage, the only person Torrance can count on for help is Louis Gaspare, an accused murderer who was being transported by the FBI.

It’s easy to see why a Hollywood studio would want to bankroll something like “Plane.” (Although, you’d expect it to have gotten a better title somewhere during its development.) It’s a simple, time-tested premise: An almost-empty New Year’s Eve commercial flight in Asia gets struck by lightning and loses all communication and its navigation somewhere over the Philippines. The pilot (Gerard Butler) manages to land the plane on an island run by a separatist militia – so ruthless that the government won’t even send the army there – leaving the airline to send in some mercenaries to ensure that this doesn’t become a scandalous hostage situation. But what neither the mercenaries nor the island’s inhabitants had planned for was a Captain who will stop at nothing to save his passengers, including allying with the handcuffed prisoner (Mike Colter) being extradited to Toronto on a decade-old murder charge. It’s easy to see this premise and imagine the high-octane action thriller that would surely manifest, but the final product is a dull disappointment. It’s lifeless even during its action sequences, most of which are backloaded.

The only thing that keeps the film aloft is Gerard Butler’s performance. None of the characters are well-drawn, not even Butler’s Captain Brodie Torrance, who gets the most backstory. And it’s all a fine backstory, but the only detail that ends up being essential to the plot or the character is the fact that he’s a widowed father. The rest is just window dressing, making us think that Torrance is a fully-drawn character when he’s just a cipher, another copy of a copy of a copy of iconic action heroes of old. None of these things matter to Butler’s performance, either. Still, his charismatic presence makes up for a lot, especially when everything and everyone around him is so devoid of anything compelling. There’s little to no complexity happening in “Plane,” but Butler manages to make it feel like something interesting is happening with Torrance through the accumulation of small details – a glance here, a pause there, a well-timed smirk or grimace in a reaction shot. They don’t add up to much, but it’s just enough to save the film from utter unwatchability.

For his part, Colter is following Butler’s lead and giving the film far more than it deserves. None of the plane’s passengers are well-written, but for the film’s secondary lead, Colter’s part is shockingly empty. Besides being an accused murderer, he was a member of the French foreign legion. That’s pretty much all we know about him and only serves to explain how this man is such a good shot and is so agile in the jungle. Colter gives a good glare and tries as hard as he can, but there’s never any tension as to whether this guy will help Captain Torrance. This isn’t just a missed opportunity but a failure of the film to make good on its very concept. After the crash, there’s exactly one moment where it’s a possibility that maybe the prisoner is going to screw everyone else over and make a break for it. Why even bother going through the trouble of having the character at all if that’s all the drama you’re going to wring out of his presence?

That wouldn’t matter, though, if the film delivered on the action thrills it promises. Unfortunately, it falls flat on that front, too. The plane crash itself is extremely unexciting, mainly because the film’s premise necessitates it landing at least moderately safely. But even the film’s final action sequence feels predetermined at every cut, relying on jingoistic Americans vs. “foreign savages” tropes as its only source of tension or excitement. But for all the shots of people indiscriminately shooting machine guns while screaming to the heavens, this never approaches the fun that one would expect from an action film with this premise.

It’s easy to see the potential in “Plane,” but the film squanders it at every turn, leaving so much inherent in its very premise underexplored. As it turns out, the film’s title isn’t the most boring thing about it.