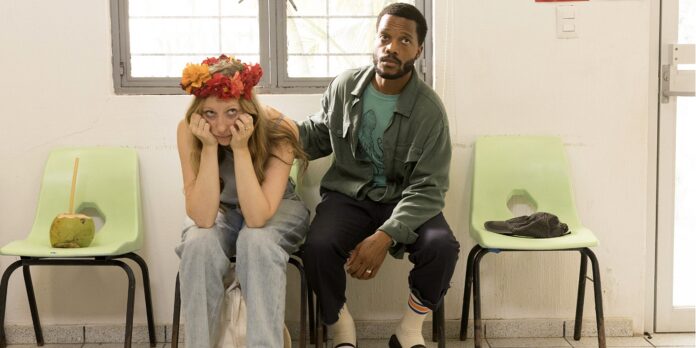 THE STORY – In this cringe comedy, a married couple face a marriage test when one of them drops a baby during a tropical island wedding.

Comedy is entirely subjective; this much is true. This is why jokes aren’t the most crucial thing in comedies. They’re important, sure, but in order for a comedy to really work, it has to have more – characters you care about, a plot that doesn’t spend too much time treading water, and a strong sense of visual style – in order to reach those people who may not vibe with the humor of the script. Sarah Adina Smith’s new comedy “The Drop,” finally arriving on Hulu half a year after premiering at the Tribeca Film Festival, really only has the jokes. Some of them are good. A few of them are great. Unfortunately, most of them don’t land, and when they don’t, the film doesn’t have much else to hold it up.

A great premise can take you pretty far, and Smith’s screenplay (co-written with Joshua Leonard) certainly has that. Lex (Anna Konkle) and Mani (Jermaine Fowler) are desperately trying to have a baby. Lex is currently stressed about making a cake and writing the vows for her friends Peggy and Mia (Jennifer Lafleur and Aparna Nancherla), who are having a very small destination wedding in Mexico at the resort owned by Josh and Lindsey (Joshua Leonard and Jillian Bell), other members of the friend group. When the whole group meets at the airport, Lex ends up holding Peggy and Mia’s baby daughter and promptly dropping her on the concrete.

This set-up is the film’s absolute best joke; as the soaring score playing while Lex holds the baby is broken by an awful splatting sound, chaos ensues, and operatically dramatic music comes in as we cut to the title card. This is exactly the kind of event that would feel like the end of the world to a young wannabe mother, especially at the start of what was supposed to be a relaxing, love-filled vacation. As her friends whisper behind her back, Lex becomes even more wracked with guilt. It’s not helped by the fact that becoming a new mother has turned Mia into a gun-toting lioness who turns ice-cold to Lex after the titular event. As the weekend goes on, Mani grows more distant, wondering more and more if this means that he might not get the family he so wants with Lex… or if he even wants it with her after this.

The problem with all of this is that for all that’s going on with these characters, there’s really not much actual plot here. Moments lead to each other nice and organically, but after the inciting incident, it’s just Lex feeling bad, then Mani feeling bad, with scenes of Josh and Lindsey being mildly racist hippy dippy jokes, and the last couple of the friend group, TV star Shauna and her professional name-dropper of a husband Robbie (Robin Thede and Utkarsh Ambudkar) being microdosing entitled assholes. It’s a vibe-y hangout movie. That’s fine, except that none of these characters are people you want to hang out with. This may partially be the point, to get us to side with Lex and Mani as the nice, sane ones of the group. The screenplay goes further than it needs to in order to get us to that point, though, and the cast is so committed to the bit that it makes it even worse.

To be clear, this is a cast full of very funny people who are all completely unafraid to make utter fools of themselves. The vibe here is full-on cringe comedy, and the cast plays it to the hilt. Konkle and Fowler are easily the best in show, showing lots of range in fully realized characterizations, but they also have the most well-written roles. Thede and Ambudkar make for a hilariously self-important couple, and Leonard and Bell are fantastically dim, with moments approaching self-awareness. But they’re all so committed to the bit that it all feels a bit flat and unnecessarily annoying. These people aren’t supposed to be great fun to be around, but we lose all sense of who they are as people, to the point where one starts to actively question if these people were ever actually friends. Because friends wouldn’t act like this. People barely act like this. It feels like the heightened characters are an attempt at satire. If so, there’s not much new or interesting that gets said, gutting the satire and cutting off its claws.

So “The Drop” has a good set-up and good performers trying but failing to get the best out of a script with only a few good moments. Unfortunately, the craft isn’t strong enough to carry us past all the not-so-good moments. The cinematography amps up the handheld qualities, making the moments on land feel just as unmoored and unsteady as the moments at sea. The editing does little to help the comedy after the titular scene. Ellen Reid’s score, at least, is cleverly used throughout, doing more than anything else to make this feel like there’s a unifying satirical vision, even when everything else kind of fails on that front. A great comedy needs more than just a few great jokes. The cast gives it their all to make sure the best jokes land, but ultimately “The Drop” just doesn’t have enough skill to fully make good on its admittedly hilarious premise.