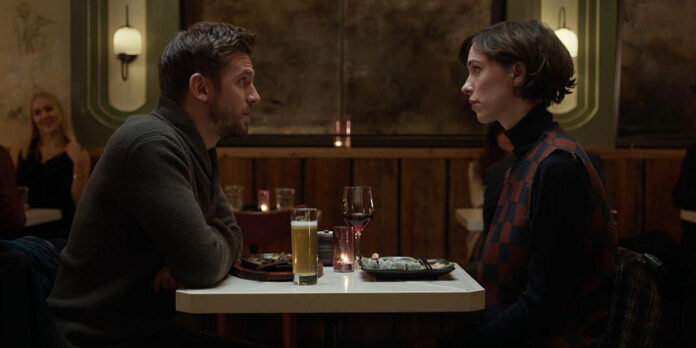 THE STORY – Anna and Will were each other’s first: first kiss, first love and first and only relationship. Now, 10 years in, as Will is about to propose, the couple’s best friend makes a drunken toast, suggesting that they should sleep around before their inevitable marriage. The joke lands like a lead balloon, but the thought lingers until Anna proposes that they try opening their relationship as a sexual experiment. Together, they venture out of the purely monogamous boundaries of their relationship.

​Don’t let the marketing fool you into thinking that “Permission” is just another one of your typical run-of-the-mill sex-comedies, filled with gags and crude jokes. “Permission” is a much deeper exploration of relationships in 2018 and how incredibly difficult they have become. Depending on your beliefs over how people should behave within relationships, you’ll either think that these characters are independent and flawed or selfish and incredibly flawed. It’s a fascinating exploration of human nature, the desires of the heart and monogamy as a whole when deep down the truth is something that many have feared all along: two people are not meant to be together forever.

Anna (Rebecca Hall) and Will (Dan Stevens) are a happy couple in their low-30’s living in New York City. Will (A carpenter by trade) is on the verge of completing a new house for Anna, at which point he will propose to her. Never having been with anyone else their entire lives, the two suddenly get the idea from a shared dinner date one night, that maybe they should give each other permission to explore other sexual opportunities with other people. They would still love each other and come back to each other in their apartment every night but they would be free to sleep with other people. Despite giving them the idea, Anna’s gay brother Hale (David Joseph Craig) and his long-term lover Reece (Morgan Spector) each think it’s a bad idea now that the once dinner joke is playing itself out in reality. Anna and Will give it a shot, thinking that their love is so strong that it will not matter who they sleep with but when Anna meets Dale (François Landriault-Barbeau) and Will meets Lydia (Gina L. Gershon), things start to become more complicated than the seemingly once happy couple anticipated.

You hear the common phrase that a relationship is work. Well, what happens when you don’t want to do the work anymore? Some would say that the work is what makes a relationship rewarding. Because writer/director Brian Crano does not show that aspect of Anna and Will’s relationships with the other people in their lives, we only see the “honeymoon phase.” Are the new relationships artificial? Probably. Based on the little information we are given, I think it would be safe to conclude that neither Anna or Will would last in the new relationships they have each found. Common sense says that they should end this idiotic idea and get back together, get married and move into the new house that Will has been struggling to complete for Anna with his own hands. However, things are much more complicated than that. So is the way of life, I suppose.

Human beings are extremely complex and those emotions are given full life by Rebecca Hall and Dan Stevens. The two have incredible chemistry together, so much so that any other outcome than them being together feels incredibly wrong. Through bouncy and precisely edited montages, we see glimpses of their life together and even though they have been together for many years, they appear so happy together. And that is where the film tricks you. I cannot tell whether or not if Crano’s decision to subvert expectations and take this adult comedy into unexpected territory regarding Anna and Will’s relationship was the right decision or the wrong one. However, I can determine that it felt realistic and the note which this film ends on is much more interesting than the standard “And they lived happily ever after.”

Regardless of what you think of their behavior and actions, Anna and Will are two living, breathing characters whose relationship plays out as authentically as any I have seen in recent memory. The same can be said for Anna’s brother and his boyfriend Reece (Will’s best friend and business partner) whose relationship at first appears loving and perfect on the surface but change and new desires complicate things forcing the conflict into the story. While I feel their side story is a bit too separate at times and doesn’t tie into Will and Anna’s story as well as I would’ve hoped, the outcome is still the same albeit with much less of a gut-punch. Even if I do not agree with the character’s actions throughout most of the film, I cannot help but praise the fact that the manner in how they deal with these decisions and react to them felt painstakingly believable. If this is what relationships look like in 2018 then I fear we are all doomed.