And The Oscar For Best Picture Goes To…? 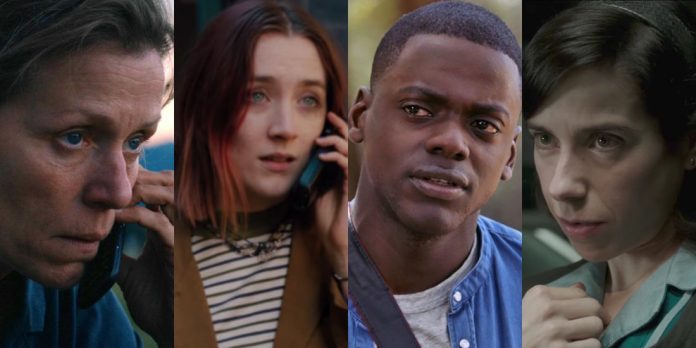 ​The fight for Best Picture at the Academy Awards is still widely seen as up in the air. Most believe it’s a four-man race between “Three Billboards Outside Ebbing, Missouri,” “The Shape Of Water,” “Lady Bird,” and “Get Out.” They each have a narrative that can lead them to victory; the greater issue is they each lack a vital component most Best Picture-winning films have. “Three Billboards Outside Ebbing, Missouri” was left off the Best Director lineup on Oscar nomination morning, and the general rule of thumb has been Best Picture and Best Director tend to parallel. “The Shape Of Water” was not included among the Screen Actors Guild Cast Ensemble lineup, which was an early sign last year that “La La Land” wasn’t the unavoidable favorite the Golden Globes sweep and record-setting 14 nominations indicated. And “Get Out” and “Lady Bird” substantially unperformed at the BAFTA awards, both missing Best Film and Best Director nominations, indicative of a larger problem with these critic darlings appeal within the industry.

Here’s how I see potential scenarios playing out:

“Lady Bird” wins the WGA, finally bringing life back to the film’s stalled momentum, and Greta Gerwig goes on to win the Oscar for Best Original Screenplay. This could signal support for “Lady Bird” to win Best Picture at the Oscars, too.

“The Shape Of Water” wins the WGA, signally a lacking support for both “Lady Bird” and “Get Out,” clearing the way for “Three Billboards Outside Ebbing, Missouri” to take the writing Oscar. Or “The Shape Of Water” wins the WGA, wins at BAFTA for Best Film, and rounds out the award season by winning Best Picture at the Oscars, and potentially taking Best Original Screenplay along in a sweep.

The Best Original Screenplay winner at the WGA will likely come down to the two critical trophies, “Get Out” and “Lady Bird.” Indicative of the Critics Choice Awards and the regional critic’s associations and its general mass popularity, one could gather that “Get Out” is the film out in front at this particular guild. I would agree, but as much as its mass audience appeal would work with this institution, I believe the genre bias will poison its chances of winning the Oscar. In fact, if “Get Out” wins the WGA, it is the perfect set-up for “Three Billboards Outside Ebbing, Missouri” to swoop in and take the Oscar, as it is the more type of screenplay the Oscars usually reward. However, if “Lady Bird” happens to squeak by “Get Out” for the WGA, then I think it goes the long haul and becomes the frontrunner to win the Academy Award for Best Original Screenplay, making it more viable for a Best Picture win. However, “The Shape Of Water” could upset both of these indie favorites and bring about a confusing race, or it could clear the way for “Three Billboards Outside Ebbing, Missouri” to victory.

Having won four Golden Globes and three Screen Actors Guild Awards, including both Best Picture awards, Best Actress, and Best Supporting Actor, “Three Billboards Outside Ebbing, Missouri” has shown a track record of garnering prizes in a big way, despite “The Shape Of Water” gathering the most nominations at nearly every award show. “The Shape Of Water” got also the most nominations at the BAFTA awards; however, “Three Billboards Outside Ebbing, Missouri” overperformed at BAFTA, totaling nine nominations in its favor, including both Best Film and Best British Film. This indicates a strong support for British filmmaker Marin McDonagh, who is already a BAFTA winner for “In Bruges.”

So Where Does That Leave Us?

The bottom line is, if “Three Billboards Outside Ebbing, Missouri” wins the BAFTA Original Screenplay award after winning the Golden Globe Best Screenplay award and not being able to compete in WGA, it’s difficult to reasonably argue against it winning the writing award with the Academy on Oscar night. Even if its damaged by the preferential ballot and “The Shape Of Water” pulls out the win for Best Picture along with Best Director, “Three Billboards Outside Ebbing, Missouri” looks set to win Best Original Screenplay. That is, unless “Get Out” or “Lady Bird” wins the BAFTA (And, based on their nomination showings, they probably won’t).

If I’m being completely honest, I don’t believe “Get Out” or “Lady Bird” to be as serious of contenders as fans of those films would lead you to believe. Despite how brilliant and original it is, I believe “Get Out” will inevitably suffer from genre bias from older voters within the Academy. “Get Out” not only underperformed with BAFTA nominations, but also the Golden Globes. “Get Out” was not nominated for the Best Screenplay award, and yes, I know there is no direct correlation, but it’s worth mentioning, not since “Milk” has the Best Original Screenplay Oscar winner not been nominated at the Golden Globes. Both the BAFTAs snubs in the major categories and the Golden Globes’ lukewarm reaction to it show something is lacking for “Get Out” on a broad base. But people have faith in this movie and this screenplay, that it will go all the way.

For a while, “Lady Bird” looked poised to be this year’s consensus pick for Best Picture under the preferential ballot, emerging from its theatrical run with better reviews than any movie to be released in years. However, once industry awards took place, “Lady Bird” has failed to show signs of strength in its wings to fly to Oscar victory. It did not win any of the major guilds (Even when the preferential ballot was used!); it couldn’t even win an acting award for either actress at the Screen Actors Guild, which heavily went for “Three Billboards Outside Ebbing, Missouri.”

If you ask anyone who is predicting either “Get Out” or “Lady Bird” to win Best Original Screenplay to justify why they’re predicting it, their answer usually begins or ends with “I think the Academy will use this to reward Jordan Peele/Greta Gerwig.” Peele and Gerwig were breakout filmmakers in 2017, with their writing and directing efforts. Most of the goodwill for their films is due to their efforts into “Get Out” and “Lady Bird.” While this seems like a good argument, since neither film will likely win Best Picture, it’s easy to accept that as a reason for predicting it. But after many years watching the awards race play out, I’m starting to take the position that the Academy strategically voting to “spread the wealth” does not happen. The Hollywood Foreign Press, often concerned with appearances, does this among the studios and networks when they pick their winners. But I don’t believe this is the philosophy of the Academy.

It’s easy to do as people who try to analyze things like awards winners; we try to think how things *should* work out, to tie things up in a nice little bow. But rarely can we summarize things into as pretty of a package as we think in our head. People say, “The Oscars have tried spreading the wealth the past couple years.” That’s not really true, rather there’s been a film with technical gravitas that wins many awards, just not Best Picture. “Gravity,” “Mad Max: Fury Road,” and even “La La Land” all had six or more wins. It’s just how the cards are falling, that the Best Picture winner has been a low-scoring Oscar trophy number in recent years. What I mean, by this: the Academy isn’t going to have a checklist and say “I need to reward Jordan Peele for something,” nor will they say, “I need to reward Greta Gerwig because of the #MeToo movement.” And sorry to burst any bubbles, but the Academy isn’t going to go to the Best Supporting Actress portion of their ballot and say to themselves, “I’ll vote for Laurie Metcalf so ‘Lady Bird’ can win something.” No, not after Allison Janney swept through Critics Choice, Golden Globes, and SAG.

The voters are going to vote for what they like the most. From the evidence presented thus far since the beginning of January, “Three Billboards Outside Ebbing, Missouri” and “The Shape Of Water” seem to be those two films, and the former has the most to gain from the remaining award shows left before the Oscars.

​So what do you think? Which of these scenarios do you see playing out? How do you think things will go t BAFTA/WGA? Let us know in the comments below!