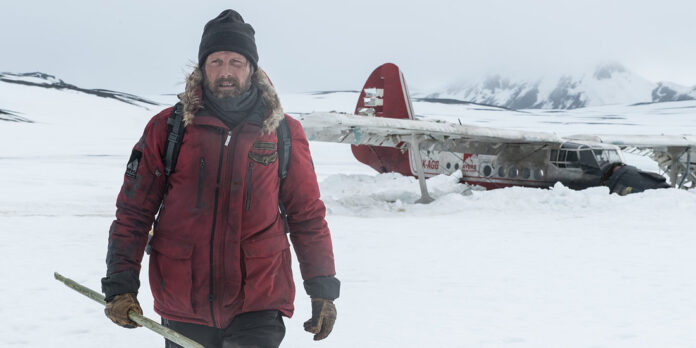 THE STORY – A man stranded in the Arctic after an airplane crash must decide whether to remain in the relative safety of his makeshift camp or to embark on a deadly trek through the unknown in hopes of making it out alive.

The story opens up on a nameless character played by Mads Mikkelsen, in the snow, digging and shoveling. For what reason? We don’t know. We do come to realize that his plane has crashed and right away we are eased into the patient storytelling by Joe Penna as we feel every success and failure for the unnamed character. We don’t know how long he’s been out in the middle of nowhere but we know it must have been for a long time for the camera reveals that he’s digging a huge “SOS” sign into the snow for any nearby planes who might be able to rescue him.

One finally does fly over in an attempt to rescue him, however, it too crashes into the snow due to the unpredictable weather, with the pilot dead and the only other survivor, too injured to go on her own (Maria Thelma Smáradóttir). Tempted to leave her to die but with a feeling of debt and sympathy, the unknown man takes the unnamed woman to his crashed plane and saves her life before deciding to embark on a dangerous and arduous trek through the Arctic in hopes of seeking rescue. Or otherwise, whether from the cold, the geography, the animals or from running low on supplies, the two strangers face certain death.

Part of where “Arctic’s’ strength lies is with Mads Mikkelson’s performance, which surely must rank as one of his best in any format (He’s been quite excellent before in the 2014 foreign film “The Hunt” and the NBC television show “Hannibal”). Here, he pretty much has to deliver a one-man show with very little dialogue, no backstory, no name, and no character development. The audience is forced to project their own life experiences onto what is essentially a blank slate of a human being, allowing us to develop a stronger emotional connection to the movie, should we be willing to give ourselves over to it. Mads exhibits warmth in a place where there is none. His strength and perseverance, despite whatever hurdles the script throws at him, shines through without the need for any theatrics or gimmicks. It’s a performance that is every bit as physically committed to icy punishment as Leonardo DiCaprio’s in “The Revenant” and as humanistic and soulful as Tom Hanks’ one-man survival performance in “Cast Away.”

Penna grounds his story deep within reality. There are no giant set pieces or scenes with CGI creatures made to look interesting for the trailers in an effort to sell more tickets. Here, the dangers feel so authentic and believable, filled with tension and powerful moral dilemmas that constantly keep the audience engaged throughout, all the way until the film’s tearful final moments. It’s also probably the best film since “The Revenant,” to display what true cold actually feels like on screen. It’s harsh, grueling, chilling and yet empowering due to Mikkelson’s strength in the face of such brutal conditions. “Arctic” is an agonizing experience that is worth the journey. Bundle up.