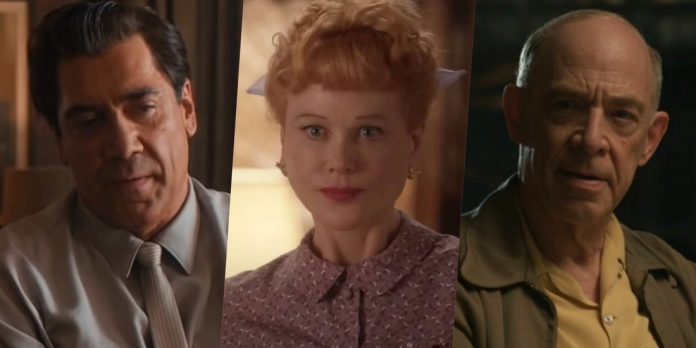 By Robert Dougherty
​
Aaron Sorkin is known for many things, and very few of them are loved by all. But the one thing Sorkin lovers and even some haters can agree on is that his hyper-verbal, hyper preachy scripts have been a feast for actors over the last 30 years. “Being the Ricardos” is now an Academy-sanctioned example with Nicole Kidman, Javier Bardem, and J.K. Simmons all nominated for Oscars, even though the Sorkin script they performed was snubbed and the film missed out on Best Picture. All the awards buzz for a Sorkin project this season now rides on Kidman, as the Golden Globe winner can bring order to a chaotic Best Actress race by winning SAG on February 27th. If she does, not only will she be one crucial step closer towards a second career Oscar win, she will be one step away from becoming the first Oscar-winning performer for a Sorkin movie.

Given Sorkin’s decades of actor-friendly scripts and speeches, it might sound surprising that no actor or actress has ever won an Oscar for performing them. Many have been nominated in the past 30 years, yet Kidman may already be closer to winning than anyone ever has for a Sorkin project.

Sorkin’s Oscar history and movie history, in general, started in 1992, when “A Few Good Men” launched 30+ years of Jack Nicholson “You can’t handle the truth!” impressions and got Nicholson a Best Supporting Actor Oscar nomination as well. Unlike with Bradley Cooper in “Licorice Pizza” this season, Academy members voted in a perennial nominee for only a few extended scenes of work in a Best Picture-nominated film. But the nomination and another permanent place in pop culture would be Nicholson’s biggest wins that year. As it turned out, fellow past winner and living legend Gene Hackman also got nominated as a scene-stealing villain that year in “Unforgiven” – an unconventional, deconstructive Best Picture-winning Western from a directorial legend, much like “The Power of the Dog” aims to be now. Whether Nicholson was canceled out by Hackman, or it was deemed too soon for him to win a third Oscar – which would come anyway five years later – he became the first of many Sorkin performers to lose on Oscar night.

After “Malice” and “The American President,” Sorkin famously moved to television and didn’t write another movie script until “Charlie Wilson’s War” in 2007. Despite having Sorkin, Mike Nichols, Tom Hanks, and Julia Roberts, the film didn’t make much impact in awards season, except for Philip Seymour Hoffman as another scene-stealing Sorkin supporting player. But like Nicholson 15 years earlier, Hoffman was already a past winner and was going up against an instantly iconic villain from the eventual Best Picture – in that case, Bardem himself for “No Country for Old Men.” As such, timing and a sinister juggernaut defeated a Sorkin nominee once again.

Three years later, Sorkin’s time seemed to come when “The Social Network” was the overwhelming critics’ choice as 2010’s best film. What’s more, Sorkin himself was honored with an overwhelming Oscar win for Best Adapted Screenplay, in what may be the last time everyone was united in praising him. But while Sorkin himself won big, “The Social Network” was famously upset in the end by “The King’s Speech,” and no one else from the film won a major Oscar – including Best Actor nominee Jesse Eisenberg. Like Nicholson and Hoffman, Eisenberg could only watch as a cast member from a Best Picture winner swept their category, this time being Colin Firth for “The King’s Speech.” But Eisenberg did at least get in, unlike Andrew Garfield in Best Supporting Actor. Yet even if Garfield had gotten in, defeating Christian Bale for “The Fighter” might have been too tall an order.

Unlike “The Social Network,” “Moneyball” was a Sorkin project that got Best Actor and Best Supporting Actor nominations for Brad Pitt and Jonah Hill a year later. It might not count as much since Sorkin only co-wrote that script, although the usual Sorkin tropes of an all-knowing, ahead of his time male visionary and his devoted acolyte are right there in Pitt and Hill’s characters. Nevertheless, Pitt became yet another Sorkin nominee to lose to someone from a Best Picture winner, as Jean Dujardin helped “The Artist’s” sweep with a Best Actor win. Meanwhile, Hill’s nomination was his victory, while Christopher Plummer took the Oscar win in the meantime.

After another few years of television with “The Newsroom,” Sorkin returned to movies in 2015 with another script that got two actors nominated. While “Steve Jobs” lead Michael Fassbender was ultimately steamrolled by Leonardo DiCaprio’s overdue narrative in Best Actor, Kate Winslet did pose an early threat in Best Supporting Actress with a Golden Globe victory. That may well be the closest a Sorkin performer came to an Oscar until this year, yet Winslet finally faded back when Alicia Vikander pulled ahead for “The Danish Girl.”

“Steve Jobs” was the last time to date that Sorkin wrote a movie without directing it – and at this rate, it may be the final script he ever writes for another director. But his directorial career didn’t get off to a sterling start, if only because “Molly’s Game” was the first Sorkin movie since “The American President” not to get any of its actors an Oscar nomination. Jessica Chastain probably barely missed out in the Best Actress field, yet she missed all the same.

“The Trial of the Chicago 7” was a different story in 2019, as Sacha Baron Cohen broke into Best Supporting Actor for a relatively serious performance by his standards, just like Hill before him. Though considering “The Trial of the Chicago 7’s” early Oscar favorite status and a star-studded cast that ultimately won Best Ensemble at SAG, it hardly looked like Cohen would be its only nominee in the early going. But not only was Cohen all alone but he was also blown out when Daniel Kaluuya’s turn in “Judas and the Black Messiah” was finally screened.

Up until “Being the Ricardos,” acting nominees from a Sorkin movie have been 0-for-8 on Oscar night. At the very least, it should be stretched into 0-for-10 to start off this year’s ceremony since Bardem and Simmons are likely the fifth nominees in their respected categories. Given that Simmons’ biggest scene is when Sorkin actually has him explaining Cuban manhood to Lucille Ball on behalf of an absent Desi Arnaz, and that more than a few people believed Sorkin should never have cast the Spanish-born Bardem as Cuban icon Arnaz in the first place, the fact they still got nominated is enough of a win for both of them.

This leaves Kidman as the sole realistic hope for a “Being the Ricardos” victory, and it may be as good an option as any in an unusual Best Actress field. There are no Oscar nominees from Best Picture films, and none with BAFTA nominations, both Kristen Stewart and Penelope Cruz were snubbed by SAG and BAFTA, former Sorkin lead Chastain got in for the largely mixed reviewed “The Eyes of Tammy Faye,” and Olivia Colman already won a few years ago. As such, the only reason Kidman is the closest thing to a favorite right now is her Golden Globe win, and even that may mean minimal these days. Should Kidman repeat at SAG, most everyone will likely declare her a near-lock at the Oscars, if only by default. Yet on the flip side, if she loses at SAG and then can’t rebound at the Critics Choice two weeks later, she will likely be counted out even if there’s still no solid favorite by then. At the least, it would help Kidman more if she lost at SAG to the Oscar snubbed Lady Gaga or Jennifer Hudson instead of Chastain or Colman. A loss may not doom Kidman either way, but it would be a significant setback.

Kidman may be able to say she’s overdue 20 years after her last Oscar win, though Chastain and Stewart are the only ones in this field who have never won. Technically, Sorkin is more overdue by association, as “Being the Ricardos” is the seventh out of ten movies he’s written to get an acting nomination, and the past six all came up short for their actors. It’s not like actors have never won big for Sorkin’s scripts since Alison Janney, Richard Schiff, Bradley Whitford, John Spencer, and Alan Alda all won Emmys for “The West Wing” and Jeff Daniels won one for “The Newsroom.” With Sorkin’s history in more ways than one, it is almost startling none of his actors have ever won an Oscar too. With Sorkin’s history in more ways than one, and with the corners of backlash for “Being the Ricardos,” not everyone will celebrate if Kidman breaks the streak or comes any closer to it at SAG. But if she does lose, she probably won’t be the last Sorkin actor to have a shot at it.

So what do you think? Do you think any of the actors from “Being the Ricardos” will win an Oscar next month for starring in a film written by Aaron Sorkin? Check out the NBP team’s current Oscar predictions here and let us know your thoughts in the comments section below or on our Twitter account.