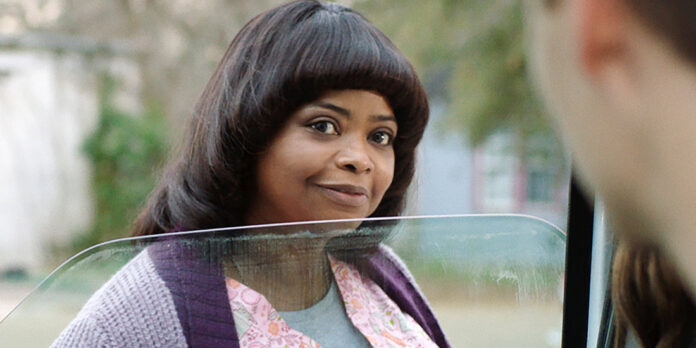 THE STORY – A lonely middle-aged woman befriends some teenagers and decides to let them party in the basement of her home. But there are some house rules: One of the kids has to stay sober, don’t curse, and never go upstairs. They must also refer to her as Ma. But as Ma’s hospitality starts to curdle into obsession, what began as a teenage dream turns into a terrorizing nightmare, and Ma’s place goes from the best place in town to the worst place on Earth.
​
THE CAST – Octavia Spencer, Juliette Lewis, Diana Silvers, Luke Evans, Missi Pyle, McKaley Miller & Allison Janney

​​​​​There is nothing quite like the movie theater in May. The kids are about to leave school and must be entertained, which can lead to mind-boggling multiplex combinations. For instance, at my nearest all-ages AMC, we’ve got the young ones covered with “Pokémon: Detective Pikachu” and “Aladdin,” the pre-teens who are too good for those can see “Godzilla: King of the Monsters,” and those teens ready to sneak into an R-rated film have “Booksmart” and the newest, though not completely original “Ma.” This final May weekend is a delightful smorgasbord of thrills, although I must advise you all: any of the above options would probably be better suited for an afternoon out of the sun than Octavia Spencer’s new horror film.

“Ma” centers on Maggie (Diana Silvers), the new girl in school. Her mother (Juliette Lewis) has moved them back to her hometown, citing some vague reasoning about Maggie’s father cheating, or leaving, or something else. Maggie meets a group of kids at school who become friends with her instantaneously, again citing some vague reason about the leader (McKaley Miller) being new the previous year. And that’s much of what this movie is: a vague excuse to watch Octavia Spencer be crazy, and maybe some teens will kiss. There is not much more to it than that.

Tonally, it is all over the place. The first hour or so plays almost like a straight-up comedy, with maybe a few jump scares here or there. You realize immediately that there is something wrong with Ma (Octavia Spencer) from the moment you meet her, but that tension does not seem to reliably build to anything until her full turn into psychopathy in the final act. We also see the standard fare of “Girl Hates Spending Time With Mom,” “Girl Blames Mom For Things” (what those things are, we never fully understand) tropes. There is a half baked love story forced into the film based on a single shared glance, which never materializes into something worthwhile. We’re watching a summertime horror film, whose success is based on whether it holds your attention or not. There is no benefit to thinking critically about this film, or to wonder why anyone is doing what they are doing, because it will force the whole thing to fall apart between your fingertips.

We are here for the scares, and while we may have to wait a little while to get them, the film eventually serves them to you on a silver platter. The final 20 minutes or so is one big blood fest (think more “Us” than “Saw” in terms of horror levels of gore) and if you are anything like me, you would find yourself cringing backward into your seat with some of the creative new torture devices these filmmakers have cooked up. However, most of these scenes were the main focus of the trailer that has been very widely advertised. With a few exceptions, most of the worst imagery has already been seen by everyone, and in a film like this, without shock value, there is no value.

The only thing you don’t get to see in the trailer is the lead-up to the scares and the reason why Sue-Ann has gone full villain. In fact, you don’t get to see any characterization from anybody, but that does not really change once you step into the full-length film. Everybody gets the barest bones of a character to play with, acting more as vessels for fear to be placed on, which again, is not enough. If there is an interesting villain, that can sometimes make up for the lack of interesting heroes. But Sue-Ann is just… not that interesting? Sure, her actions have a reason (whether they are fully based in logic or not), but it just feels like an anti-climactic payoff. It is not reason enough to feel vindicated or horrified; you are not on her side or her victims’. You are just a person, sitting in a theater, watching this happen and saying “wow, I can’t believe my eyeballs just saw that” when all is said and done.

At the end of the day, that is the reason to see “Ma.” Go see it because there is nothing else that fits your style at the theater currently and you want to see something crazy. Go see it because Octavia Spencer sells it, for the most part, and she is always fun to watch. But if you walk in hoping to see an interesting character study or a unique thriller, or really any other reason, you’ll be disappointed.