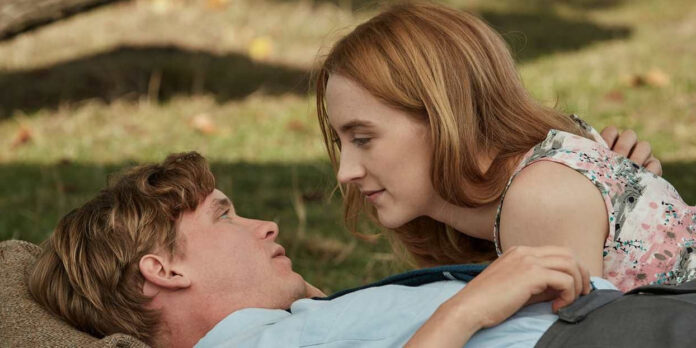 THE STORY – In 1962, newlyweds Edward and Florence, both in their early 20s and also both virgins, spend their honeymoon preoccupied and terrified by the upcoming consummation of their marriage.

​​​​​​”On Chesil Beach” opening shot is exactly where you would expect: on the beach. We are introduced to the new film by Dominic Cooke with cinematographer Sean Bobbit’s striking images capturing the rocks, sand, and ocean that occupy the space where our two lead characters will eventually make the biggest decision of their lives. We should care about their relationship, their desires and what those desires ultimately say about the film’s themes and message. However, due to clunky storytelling and more than a few uncomfortable scenes, “On Chesil Beach” limps awkwardly towards its final would-be gut-punch ending that unfortunately does not have the impact that director Dominic Cooke and writer Ian McEwan (Who’s novel this is based on) intended.

Set in England in 1962, newlyweds Edward (Billy Howle) and Florence (Saoirse Ronan) are young (In their 20’s) and in love. However, on their honeymoon at Chesil Beach, when the moment for them to consummate their marriage approaches, Florence and Edward both discover realizations about each other which threatens to destroy their marriage and forever alter their lives.

Cooke and McEwan are trying to tell us a lot here about relationships, the sexual dynamics between men and women and how the behaviors of the past are not so different than they are today. The filmmakers play around with time in telling their story of a doomed romance between Florence and Edward. Unfortunately, the transitions are forced and clumsy (A lot of “Remember the time when…?” queue flashback, moments) resulting in a narrative structure that disengages the viewer despite emotionally committed performances from Saoirse Ronan (As subtle and lovely as ever) and a tormented Billy Howle.

It’s easy to get caught up in a discussion about the film’s gender politics and what Edward wants from Florence and what Florence wants from Edward. The film presents the couple’s initial stages of their relationship in a sweet and blissful way that suggests that their feelings for one another are genuine and nothing will stop them from being together. However, once we realize Edward’s selfish intentions and how they conflict with Florence’s fears (No doubt shaped by a dark time in her past, also not conveyed all that clearly), the story and themes of the film start to finally come into focus, resulting in the film’s best scene…

For a movie called “On Chesil Beach,” one better hope that the scene taking place on the beach (Foreshadowed by that aforementioned opening cinematography by Sean Bobbit), delivers and Ronan, Howle, Ewan and Cooke all up their game to deliver a scene that is filled with beauty, nuance, insight, pain and understanding. Florence and Edward’s emotionally charged argument on the beach plays out like a one-act between the two actors and goes on at great length. Blocked exceptionally well, shot with care (Ronan’s blue dress contrasted against the darkened and bland colors of the beach is a thing of beauty) and acted by both performers on another level opposite of how the rest of the movie plays out, the climactic scene delivers and makes the rest of the film’s faults almost worth it. Had the movie been a short film of just this scene alone, from the time we open up with Florence and Edward in the hotel room, until the scene on the beach concludes, this would’ve been extraordinary and still would have told us everything we needed to know about these characters and this story. Unfortunately, the flashbacks and events afterward, are only there to extend the running time and they eventually bog the story down.

Saoirse Ronan and Billy Howle are currently 0 for 2 with me after “On Chesil Beach” and “The Seagull.” It’s not necessarily their fault either as both actors are always captivating to watch and definitely bare their souls in both films. “On Chesil Beach” has good intentions and does what it can to tell this story of two emotionally fragile and tormented lovers who believe they’re meant to be together until they’re not. In 2018, one would think their Facebook relationship status would say “It’s complicated” but in Ian McEwan’s story set during a time when societal expectations were still everything, it’s certainly more complicated. I just wish the film adaptation had kept things simple with its storytelling and structure, allowing us to better digest its themes and appreciate the performances from the actors. The climactic scene on the beach is evidence of how this story could have played out better had it been presented in a linear fashion. As is, you’ll have to swim through some choppy waters to reach the beach scene and by that point, you may be too disinterested to even care at that point.