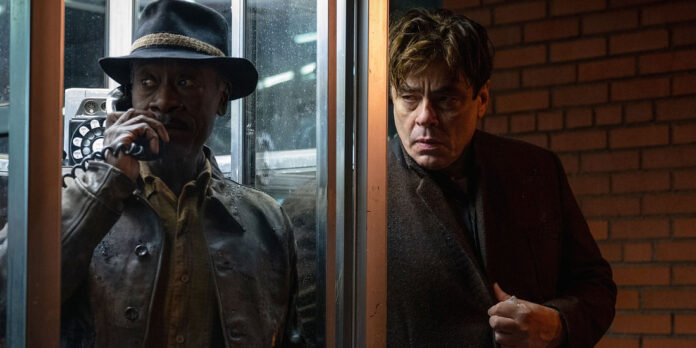 ​​Steven Soderbergh has yet to return to his Oscar-winning highs of “Traffic” back in 2000. However, his latest, a darkly comedic heist noir, is undoubtedly the closest he has come since 2013’s “Side Effects,” resulting in one of his best films in a while. Though he’s never left and has been making films consistently for years (despite retirement rumors and even announcements), it feels good to have him “back” in the genre he feels most comfortable in.

Boasting a superb ensemble cast that includes Don Cheadle, Benicio Del Toro, Brendan Fraser, Ray Liotta, Matt Damon, Julia Fox, David Harbour, Kieran Culkin, Amy Seimitz, John Hamm, and more, “No Sudden Move” is bursting at the seams with on-screen talent and a large enough plot to give them all moments to shine. Soderbergh’s construction can’t quite keep this machine on the road, but it’s fast and sturdy enough. It is probably the most fun you will have watching a movie this objectively depressing for a while.

“No Sudden Move” charts the paths of two low-level hired guns (Cheadle and Del Toro) as an apparently easy crime job expands, putting them into the path of organized crime, corrupt police, and Detroit’s auto-monopoly. Like the classic Raymond Chandler potboilers of old, the screenplay is gleefully convoluted. But that’s because the plot isn’t the point. The point The characters, the mood, and the “Chinatown”-esque message of an inability to escape the shackles fate has placed on you are at the forefront here. Soderbergh doesn’t seem interested in where the story is going so much as he is in how it gets there.

How we get there is seeing an ensemble full of A-list thespians selling witty pseudo-noir dialogue, kooky canted camera angles, Brendan Fraser playing Orson Welles in “Touch of Evil,” Julia Fox and Amy Seimitz turning 50s women tropes on their head, and lots of gruesome gunshot deaths. And all of this operates under the film’s bleak message of everyone being trapped by fate. Soderbergh is tackling a lot here in terms of indicting capitalism, racism, and police corruption. It’s an angry, or maybe just, defeatist film. I wish Soderbergh had been willing to explore some of these themes more deeply. At the same time, he feeds us this cynical spoonful of medicine in such a fun fashion while never sacrificing the film’s runtime that we’re more likely to embrace it. Think of it as the lovechild between “No Country For Old Men” and “Ocean’s Eleven.”

While the entire cast is magnetic, the MVPs are Don Cheadle and Amy Seimetz. As to be expected, Soderbergh’s below-the-line craftsmanship is top-notch. He does show a predilection for ultra-wide lenses that distort the frame at times (think “The Favourite“) that I could have done without, but that choice didn’t ruin the visual experience for me. So, in short, is “No Sudden Move” difficult to follow? Yes. Would it have been better if the plot had been a little tighter? Probably. Would it have been as fun? No. It’s not the riveting and thought-provoking thriller “Traffic” is, nor is it the blast “Logan Lucky” is. But it isn’t trying to be either. It is about as good as a film angling to be somewhere in between those two could be. At 58 years old, Soderbergh is still making sudden moves that jolt his audience into excitement, and that’s still something to appreciate.​