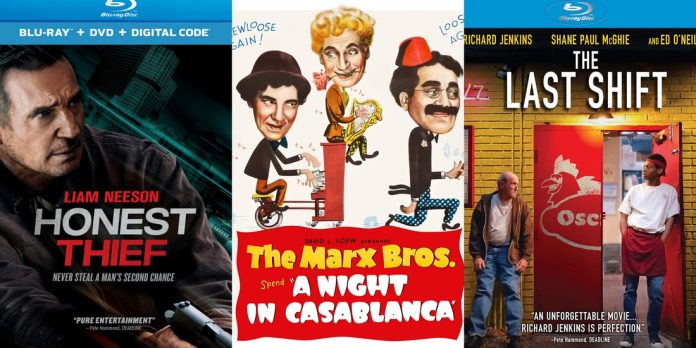 It’s a light week for blu-ray releases, perhaps due to it being Christmas week and the end of the year, but nevertheless, let’s take a look at what Blu-rays came out!

​This week’s only other big release is the Blu-ray debut of the Marx Brothers Nazi comedy “A Night in Casablanca” from 1946. The transfer from ClassicFlix looks terrific and the disc includes some audio extras and trailers for their other releases.

This week, I wanted to carry over the theme I’ve been doing of a holiday or New Year’s movies in honor of the end of 2020 and recommend the wonderful and charming Billy Wilder film “The Apartment” and its fantastic release from Arrow Academy. This 1960 Best Picture winner stars Jack Lemmon, Shirley MacLaine, and Fred MacMurray. It is about an insurance clerk working his way up the corporate ladder while also being hopelessly in love with the lonely and complicated elevator operator. The film’s winter in New York setting is perfect to watch this time of year and culminates in a New Year’s sequence that is nothing short of iconic. Obviously, this romantic comedy is known for its Oscar-winning writing and directing, but the performances from top to bottom are perfection, balancing comedy and drama effortlessly. This film also feels like the beginning of a turning point regarding the Oscars and Hollywood as a whole, kicking off the 1960s and discussing controversial subject matters (such as infidelity and suicide) in ways that are witty and modern.

As I said, the release from Arrow Academy is wonderful, with every frame of its black and white cinematography looking more beautiful than the last. It also includes a slew of special features, including an audio commentary, interviews, archival features, and video essays. Not only is this an essential classic film, but it is also a perfect way to ring in the New Year and a release I would highly recommend.

So, will you be picking up any of these releases? Did you receive any new or exciting releases over the holidays? What were some of your favorite releases to come out this year? What releases are you looking forward to in 2021?  Let us know in the comments section below or on our Twitter account.