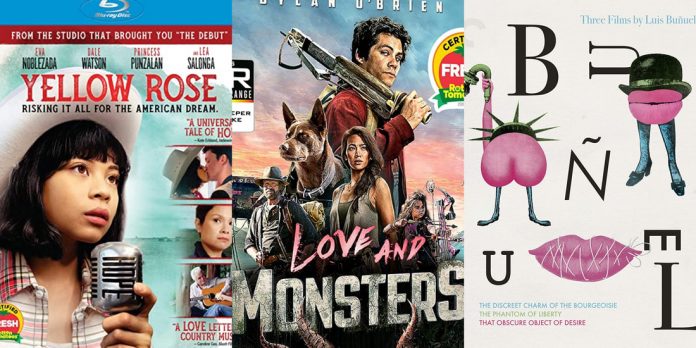 Welcome to 2021 and a new year of physical media releases! 2021 is already looking to be a fantastic year for Blu-rays, special editions, and 4Ks, so let’s get started!

​There are a couple of releases from Kino Lorber coming out this week that I wanted to highlight. First, we have 1964’s “The Train,” directed by John Frankenheimer and starring Burt Lanchester, Paul Scofield, and Jeanne Moreau. They are also putting out “Captain Newman, M.D.,” a 1963 film from director David Miller and starring Gregory Peck, Tony Curtis, Angie Dickinson, and an Oscar-nominated Bobby Darin. Though perhaps more forgotten today, the film received three Academy Award nominations when released back in 1963.  Warner Archive is also releasing a new Blu-ray of the 1975 film “The Man Who Would Be King,” directed by John Huston and starring Sean Connery, Michael Caine, and Christopher Plummer. This could be an excellent way to remember the late Connery if you’ve run through his Bond films and other more famous works.

What better way to ring in the New Year than by recommending not only my favorite movie of all time but also my favorite Blu-ray that I own and that is the Criterion Collection release of “The Silence of the Lambs.” I know I recommend Criterions a lot and that can be a bit cliched, but they do take up the bulk of my personal collection and also put out such quality releases that it is hard not to. I still have several titles in my collection from other labels or standard releases to dive into that I can hopefully recommend in the coming year, but for now, I am what I am.

Obviously, I don’t need to tell you what this film is about or why it is so iconic. It was a hit in 1991. It won the big 5 Oscars. It stands as one of the top Best Picture winners of all time and remains a staple of its genre, etc. There is probably also a standard Blu-ray release of this film that you could get much cheaper. However, I genuinely believe this is the film’s definitive release and warrants the Criterion treatment and price tag.

For starters, it is an excellent digipak release with two discs and a thick, detailed booklet. I especially appreciate the release going against the iconic but typical marketing for the film and using a different (but fitting) color palette with the black, white, and blood-red to create the moth design and throughout the packaging. The film’s new 4K restoration looks flawless, approved by director of photography Tak Fujimoto and showcasing his eye-catching cinematography. The two discs information should inform you that this is a stacked release when it comes to special features and is honestly one of the strongest I’ve ever seen. The commentary track from 1994 from the film’s previous Criterion releases on LaserDisc and DVD is next-level, featuring director Jonathan Demme, actors Jodie Foster and Anthony Hopkins, screenwriter Ted Tally, and former FBI agent John Douglas. There are four documentaries on the making of the film and the film’s lore, as well as interviews, deleted scenes, behind-the-scenes featurettes, storyboards, and archival programs. It is honestly a perfect release and my recommended starting point for anyone getting into collecting Criterions. One should only be so lucky to have such a high quality and detailed release of their favorite film, and I am very fortunate and happy that I get that for mine.

​So, will you be picking up any of these releases? Let us know in the comments section below or on our Twitter account.

Share
Facebook
Twitter
Copy URL
Previous article
Golden Globes Place “One Night in Miami” Men In Supporting & Stanley Tucci In Lead
Next article
Can “Judas” Be The Messiah Of The best picture Race?