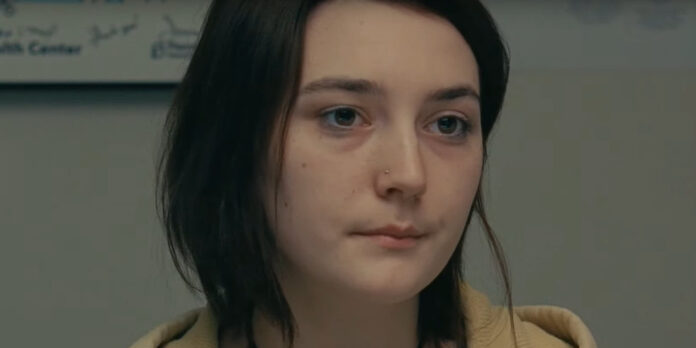 THE STORY – Faced with an unintended pregnancy and a lack of local support, Autumn and her cousin, Skylar, travel across state lines to New York City on a fraught journey of friendship, bravery and compassion.
​
THE CAST – Sidney Flanigan, Talia Ryder, Théodore Pellerin, Ryan Eggold & Sharon Van Etten
​
THE TEAM – Eliza Hittman (Director/Writer)

3/13/2020
By Casey Lee Clark
​
​Sometimes you come across a film whose plot and subject matter may not be something you have experience with, but you still connect with it on a deeply personal level. “Never Rarely Sometimes Always” is a film that has had a profound effect on me since I saw it at the Sundance Film Festival. I felt its authenticity in my bones with its painfully realistic depiction of the traumas of being a teenage girl and how upsettingly difficult it can be to obtain an abortion in America.

Eliza Hittman’s follow-up to the critically acclaimed “Beach Rats” tells the story of Autumn (played remarkably in a debut performance by Sidney Flanigan), a seventeen-year-old in rural Pennsylvania who spends her time playing guitar and working at the local supermarket with her cousin Skylar (Talia Ryder). When Autumn discovers that she is pregnant (after what appears to be a prolonged state of avoidance and denial), her local gynecologist condemns the concept of abortion by showing her propaganda videos and making her extremely uncomfortable with her encouragements to go through with the pregnancy and lack of listening or understanding. When some dangerous at-home methods fail to work, and because of the state’s stricter laws and regulations on abortion, Autumn and Skylar decide to take matters into their own hands and take a bus to New York City for Autumn to have the procedure. What follows is a subtle, honest, and tiring journey as these two girls lug their physical and emotional baggage (and what little money they have) around The Big Apple.

“Never Rarely Sometimes Always” is a slow and quiet film. It’s made up of long periods of sitting and waiting in bus stations and subway cars, aimlessly walking around New York City with little dialogue. In a film where time is of the essence, it evokes the gnawing frustration of having to wait for something you just want to get over with. Autumn faces constant pushback, and what was supposed to be a one-day outing becomes a multi-day excursion. Hittman directs the film with bleakness and honesty, while also maintaining incredible empathy for her subject. She never shies away from anything, using many long takes to really allow you to sit with what you’re witnessing – even if it may be painful or upsetting. It’s also an incredibly detail-oriented film. From the mundane procedural of the abortion process down to the girls’ clothing and accessories, everything feels lived in and true.

Flanigan plays Autumn with great subtly and emotional reserve. She keeps herself closed off and pretends like everything is fine and that makes the film’s climax – where we finally see her emotional catharsis – all the more powerful. While the film contains a lot of detail to add to the realism, it’s not a film that spells everything out for its audience. Rather, it trusts the viewer’s intelligence and allows for more visual storytelling and room for interpretation or analysis on certain plot points.

One complaint I heard about the film was its slowness and lack of humor, and yes, it is a rather slow and serious film. However, the pacing feels earned in regards to the subject matter and the almost clinical details allow it to feel incredibly realistic. Another critique I saw was that some found the film unbelievable in the idea of spending so much time on two teenage girls who travel together but don’t speak much or laugh or act like “normal” teenagers. For me, it felt like more of a commentary on the lack of dialogue around abortion today, particularly with young girls, and how no one on either side wants to talk about the specifics of it (people going through it and the friends of those people) for fear of offending or making things uncomfortable. It comes across like two girls afraid to talk about the matter at hand or changing the subject to be about anything else. (One aspect that I did find a tad unbelievable is the sheer lack of sleep these girls get and how much they are still able to function.) I do believe, though, that there are certain decisions made that, while they make sense in the context of the film and they are made by teenagers, they do feel a bit foolish or at least not the smartest way a situation could have been handled.

Nevertheless, I found “Never Rarely Sometimes Always” to be incredibly powerful and moving. I felt anxious and even nauseous for the majority of the film just thinking about placing myself in this situation and what it must be like; how truly visceral this film feels at times. I do worry about any unnecessary controversy it may face due to its subject matter, particularly specifics of the plot and how much semantics are brought up in the argument against abortion in society today. The film never glamourizes or makes abortion seem like an easy choice. It also doesn’t make the choice seem sad or regretful, at least in this instance. Any bleak or depressing aspects come from the idea of being in this situation and, more importantly, at the system put in place; the sheer amount of money it costs and how difficult abortions can be to obtain depending on where you live and how old you are. Eliza Hittman’s latest is a brutally honest portrayal of this experience and one that never judges the character for making her choice, and I feel like it’s essential viewing for people on either side of this argument, even if it’s an incredibly difficult watch. For me, it’s not a film I see myself rewatching right away, but I know that it will stick with me for a very long time.