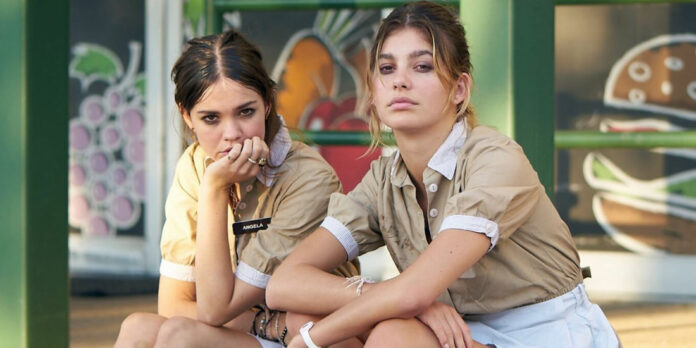 THE STORY – High school dropouts, Jessie and Angela, put their month’s rent money towards a beach trip for Jessie’s 17th birthday, hoping they can make it up by picking up extra shifts at the diner. When things don’t go according to plan, the duo must embark on a series of drug-addled misadventures.
​
THE CAST – Maia Mitchell, Camila Morrone, Kyle Mooney, Joel Allen & Kendal Smith

​Augustine Frizzell’s debut feature is, if anything, an original intersection of two, typically mutually exclusive ideas: female friendship and stoner slapstick comedy ala “Harold and Kumar.” Augustine Frizzell’s film “Never Goin’ Back” celebrates the indecent perks of women’s liberation, the sort of sexually flippant, hedonistic, and brazen gross qualities of “dude” movies helmed by actors like Seth Rogan, only in this case refreshingly filtered through the vehicle of two parent-less sixteen-year-old girls.

Angela (Maia Mitchell) and Jessie (Camila Morrone) are best friends hell-bent on taking a beach trip for the first time – Galveston beach to be precise, where they daydream about “kissing dolphins, smoking ganja, and eating donuts.” Not exactly the stuff of luxury, but for our protagonists that live in a decrepit house in the suburbs of Dallas, Texas with Jessie’s moronic older brother Dustin (Joel Allen) and his pervy friend Brandon (Kyle Mooney from last year’s “Brigsby Bear“), such a vacation sounds like a paradise.

It’s no matter that Angela uses their rent money to fund the trip a week before rent is due, they’ll just pick up extra shifts at the pancake house. Their ridiculously forgiving boss, Roderick (Marcus Mauldin) seems amused enough by his two eccentric employees to keep them around, but it’s obvious he’s considered firing the girls more than once before. In comes Dustin with a half-baked scheme to become a drug dealer, which unsurprisingly backfires less than 24 hours later, to the girls’ detriment. Long story short, making their shift at the diner is thwarted by a robbery turned drug bust that sentences the duo to two days in juvie.

Once the girls are freed, the movie clicks into place and goes full steam ahead into a trashy Odyssey full of doomed distractions and bad ideas. Desperate to use the bathroom (Jessie is two days and counting without going #2) and wash their smelly work uniforms before their shift six hours later, the girls come home to the water shut off, no toilet paper, and an unnervingly nonchalant Dustin. A trip to the laundromat is redirected to a day drinking party where the girls are sabotaged by scarfing down a bunch of mislabeled weed-infused goodies.

“I don’t feel anything,” says Jessie on the bus ride to work, hoping the brownies never take effect. Of course, they do – and in what is arguably the funniest scene in the movie – the two girls walk off the bus dead-eyed and zombie-like, reeking of beer as if they’ve been to hell and back just to pick up their shifts. In a sequence that focuses on the dull paranoia, awkward slowness, and unwieldy rifts of silence that are side-effects of being a little too stoned, the camera lingers on stacks of pancakes, screensavers and people that may or may not be staring at the girls because they know they’re high, in what is an amusingly realistic bit of stoner perspective.

Meanwhile, a secondary storyline detailing the doltish machinations of Dustin and his boy posse is only really amusing insofar as it’s a perfect caricature of what stupid men look and sound like, which might feel right on some level, but is ultimately unoriginal and lazy. We watch the boys as they practice their dance moves, botch their drug pickup, and engage in inane banter (You’d think they were the perpetually stoned ones), somehow making Angela and Jessie out to be the responsible ones in the household. It’s no surprise the girls want to skip town.

Newcomers Mitchell and Marone are ablaze with lust for life, channeling the girls of Spring Breakers only much funnier, and without the veneer of violent glamour. With permanently smudged eyeliner, short shorts, and greasy wind-swept hair, the two embody a very specific millennial experience, one that relishes freedom no matter how unattractive or unproductive, one that openly laughs in the face of rigid gender rules, but is ultimately encumbered by class and lack of opportunity. Somewhere between the anthropological insight of Richard Linklater’s “Dazed And Confused” and Sean Baker’s “The Florida Project” is the bleak backdrop to “Never Goin’ Back,” which only occasionally drops hints of sociological awareness, albeit casually (In one scene, the duo see Jessie’s estranged mother in the distance prostituting herself). I could not help but think of Jessie or Angela as what becomes of “The Florida Project’s” Moonie ten years later, inheriting a sort of deadbeat lifestyle and yet still emphatically hopeful and joyous. DP Greta Zozula captures the strip-mall outskirts of Dallas with crisp frames and a sun-drenched color pallette – a surprisingly effective visual product that contributes to the misadventure or journeying dimension of the movie.

“Never Goin’ Back” teases potential in so many directions, its charming leads, its social consciousness – but ultimately all it wants to be is a crass buddy comedy. There’s nothing wrong with that perse, but in overly relying on scatological humor and the sheer stupidity of its characters, there’s just nothing fresh about the stunts this movie pulls.