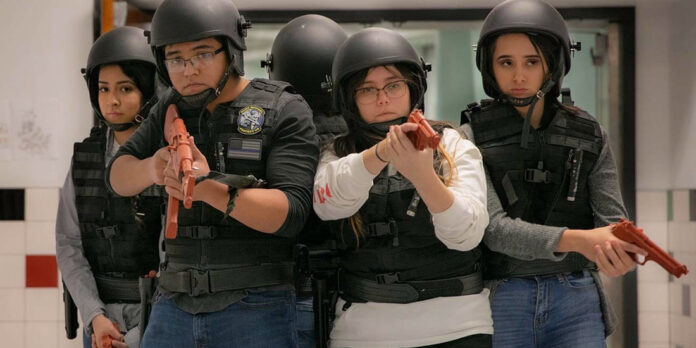 ​​​Most high schoolers are involved in drama, newspaper clubs, or a variety of athletics. But in El Paso’s Horizon High School, you’ll find a different type of extracurricular. Instead of reciting Shakespeare or writing the next front-page story, these students are making fake drug busts and learning the necessary steps to stop an active shooter situation, all with plastic guns at the ready.

“At the Ready” follows three high school students involved in the law enforcement education program at Horizon High School. These students are all interested in a career in law enforcement, whether as police officers, security guards, or, given their proximity to the Mexican border, border patrol agents. Christina is all in for the program, and her father, an immigrant himself, couldn’t be prouder that his daughter wants to pursue this career path, which he views as a high-paying job and a way to help those crossing the border. There’s Cesar, a young man who frequently goes back and forth between Mexico to visit his father, who was deported after a drug infraction. Then there’s Mason, who came out as transgender after the documentary but is known as Kassy in the film. Mason takes on a leadership role as the club trains for a competition but struggles with loneliness since his father is often not home and is afraid to come out for fear of being kicked out. But the club and all its members become a family for Mason.

At first, these students all think their future jobs are cool and are stoked about a high-paying salary. That’s expected – they’re kids, after all. And their instructors, the kind and warm Ms. Weaver and the more conservative Mr. Guerra, encourage and push them to continue down this path. But the film begins incorporating real-life events unfolding around them: children being separated from their families, the military being deployed at the border, the Texas Senate race between Sen. Ted Cruz and former Rep. Beto O’Rourke, and the height of former President Donald Trump’s rhetoric. These moments and some of the situations these children deal with at home all impact their views on pursuing careers as border patrol agents.

The latter half of the documentary is where you get the most emotional and engaging moments. Christina, listening to a recording of a young child screaming and crying for her parents, wipes away tears of her own, knowing how this career impacts the most naive and innocent. Cesar, too, becomes very candid when recalling his father’s past in smuggling drugs, still wondering to this day why he would choose that path when he already had everything he needed. Mason also becomes more socially and politically engaged after following O’Rourke’s campaign. It’s exciting to see these young people learn about the world around them and become more active in their community all on their own.

At times, it does feel like this documentary loses its focus by going in a few different directions. It might be expected, as not every student has the same experience, and director Maisie Crow tries to be as objective as possible, but a little more structure wouldn’t have hurt. This documentary also seems to gloss over important details, such as what truly motivates these students, aside from just the money. Other students in the club seem much more dedicated to a career in law enforcement, one even frighteningly and nonchalantly saying he would just beat people with his gun. It would have been fascinating to see more of their point of view in this documentary as well.

“At the Ready” doesn’t capture all the details, but it still does show an interesting introspective journey. By the end, you see how each of the three students have decided to live their lives six months after graduation, mainly questioning what the future has in store for them. No matter what path they choose, it’s clear that they’re not the same person they were a year ago, and it’s exciting that we got to see a part of the journey.