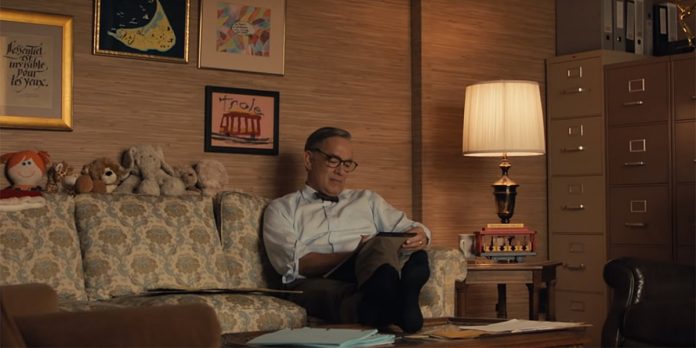 I’m definitely feeling the burn of the non-stop schedule of the past three days. I’ve seen so many movies that my head is starting to spin, and I’m worried that I don’t have an original thought left in my head to write any more reviews. I’m feeling a bit weighed down by it all, which makes me even more ready for my first screening, Marielle Heller’s “A Beautiful Day in the Neighborhood.” The reviews last night were ecstatic, so I get to the theater an hour early, coffee in hand. I’m not the only one, but they haven’t even started the line yet since they haven’t yet let in the big line of people here to see “Judy.” I’m glad that I will be more towards the front of the line and feel validated as twenty minutes later, with our line full, they let us into the theater. I feel a little less glad when a woman sits down next to me in the middle of a row and brings out her emotional support dog. I’m allergic and don’t want to spend half the movie sneezing. But she’s so sweet, and the dog is so well-behaved, that I can’t bring myself to say anything.

I will be the first to admit that I am an easy mark for this film – Mister Rogers was everything to me when I was a kid, and the trailer made me bawl. But even still, I was not prepared for how magical the film was. Structured like an episode of “Mister Rogers’ Neighborhood”, there is a sense of playfulness and a storybook quality to it that I was not expecting, and that ends up moving me greatly. I tear up quite a few times, and I can feel in my body that it’s not because of the dog, but because of genuine emotion. The perfectly-judged final shot of the film seals the deal: This is my favorite film of the festival.

As I wipe the tears from my face, I am faced with a decision: I can get in line to see “Hustlers,” which has been getting surprisingly great reviews and Oscar buzz for Jennifer Lopez (truly, we are living in the best of all possible worlds!), and then have no time before I have to get in line for my next screening, or go to the theater for “Anne At 13,000 Feet,” a tiny Canadian indie with an intriguing description that’s only an hour and fifteen minutes long. I decide to take a chance on “Anne” and have a quick break to write and eat after.

I’m glad I do. “Anne at 13,000 Feet” is the kind of film that makes me glad that film festivals like TIFF exist. Although sometimes it feels more like a proof of concept for a longer feature, it’s a very good one, with a daring lead performance by actress Deragh Campbell that makes me want to see more of her. It’s one of the rare films that I wish were longer, so that we could more fully explore the characters and themes, and I know that I could only see it at a festival like TIFF. I feel grateful.

​Now that my head and my heart are full, it’s time to fill my stomach. I grab a sandwich and head over the press room to write a review of “A Beautiful Day in the Neighborhood.” I struggle with it, as I’m having great difficulty putting my thoughts and feelings into words. Part of it is my brain feeling worn out, but it’s also that it’s just difficult to describe the film and how it made me feel without spoiling it, which in this case would definitely soften the impact of the film. I manage to finish it only a couple of minutes after I had wanted to leave to get in line for my next film, Ina Weisse’s “The Audition” with Nina Hoss.

This is the second non-Gala public screening I’ve been to, and just like with “Pain and Glory” yesterday, the line is shockingly long when I get there twenty minutes early. Also just like yesterday, the film starts late; we don’t even start going into the theater until the start time. A row of seats appears to be reserved, so everyone has avoided it, but by the time I get into the theater, those are the only seats left, so we all shrug and file in. “The Audition” is solid but unexceptional. I’ve been a fan of Nina Hoss since Christian Petzold’s “Phoenix”, and she delivers a great performance in this, as a passionate, strict violin teacher trying to strengthen a new student while navigating an increasingly complicated, increasingly dissatisfying personal life. But the film doesn’t really go anywhere, despite strong craft on a scene-to-scene level.

And now, after making it through three and a half days, I am rewarded: I have a two-hour break! I enjoy a leisurely dinner and head back to the apartment to change for the second screening of John Crowley’s “The Goldfinch.” As a big fan of Crowley’s last film, “Brooklyn” and Donna Tartt’s novel, this is one of my most-anticipated films of the festival, and also the one that I’m most nervous about. As it turns out, I was right to be nervous: Although the film is beautiful (thank you, Roger Deakins!), it does little to justify its two and a half hour runtime, and the plot feels too compressed to be believable. The performances are good, and the film is engaging. However, aside from Nicole Kidman’s fantastic additions to her impressive collection of wigs, it’s a disappointment.

That’s not quite the note that I wanted to end the day on, but it is what it is. I am exhausted as I walk back to the apartment, dragging my feet more and more the closer I get. I crash when I get back, somehow managing a coherent review of “The Goldfinch” while it’s still fresh in my memory. By now, the first reactions to my first planned screening tomorrow, Taika Waititi’s “Jojo Rabbit” are out, and once again, they’re incredibly strong. Another early morning awaits me for the biggest day of the festival: “Jojo Rabbit,” “Knives Out,” “Bad Education,” the premiere of The Laundromat” and “Synonyms,” all before a very early flight home Tuesday morning. I’m looking forward to it, but I’m too tired to be excited. Bed has never felt so good.