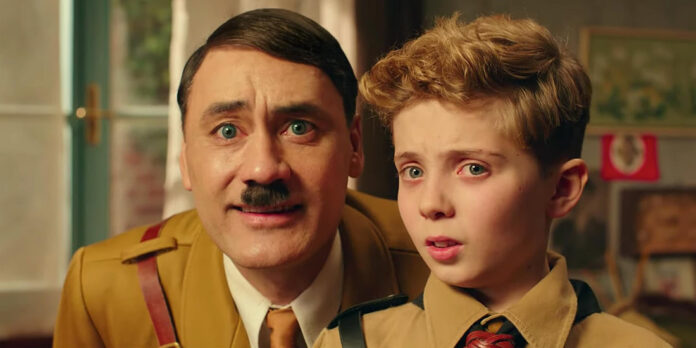 ​​​​War is absurd. Art has been making this point for centuries now, but few pieces of art have fully embraced that absurdity as much as Taika Waititi’s “Jojo Rabbit.” This is the story of the end of World War II as told through the eyes of ten year-old Johannes “Jojo” Betzler, a German boy who is excited to be a part of the Hitler Youth. He so loves his country that his imaginary friend is a hip version of the Führer himself, played to comic perfection by Waititi, who also wrote the screenplay.

Waititi’s voice as a filmmaker by now is unmistakable: Heartfelt, but peppered with a flair for anarchic comedy. That comic sensibility could end up coming across as crass and/or juvenile when talking about Nazis and their systemic extermination of six million Jews, but Waititi has it laser-focused on the absurdity of war and hate, on the idea that neither has any logical basis in reality. In other words, exactly where it should be. People have been making fun of Nazis since WWII began, but Waititi finds seemingly new ways to get laughs out of them here, starting at the very top by repeating the phrase “Heil Hitler” so many times that it abstracts into random sounds and loses all meaning. It’s a silly, smart beginning, and the film only gets better and funnier from there.

As if the level of difficulty inherent in making an anti-war satire wasn’t high enough, Waititi has the added difficulty of working with a main cast of children. Thankfully, lead actor Roman Griffin Davis is a natural, taking to the comic and dramatic elements of the role equally effortlessly. It’s a tricky balance that would trip up many a more accomplished screen actor, but Davis gives a mature, confident performance that will no doubt win him many Young/Breakthrough Actor citations this year, and many more roles in the future. Archie Yates, who plays Jojo’s best friend Yorki, is similarly effortless, nailing the pure humor of the part. And Thomasin McKenzie, as the Jewish teenager Jojo discovers his mom has been hiding in their house, lives up to the promise she showed in last year’s “Leave No Trace” with a perfectly calibrated performance of fear, anger, and aching vulnerability.

The adult cast is similarly fine, although they have less to do. Sam Rockwell, Rebel Wilson, Stephen Merchant, and Scarlett Johansson are all on Waititi’s wavelength and deliver pitch-perfect performances. But the true standout of the adults is Waititi himself as Jojo’s imaginary version of Hitler. He’s clearly enjoying himself, and that joy is infectious. His Hitler is as affable, naughty, and self-esteem-boosting as any other imaginary friend, but he’s still Adolf Hitler, and the imperiousness and self-righteousness of the real man comes through in Waititi’s performance as well. It’s a scene-stealing performance of the highest order.

“Jojo Rabbit” is ultimately a coming of age story. Jojo learns that nothing in the world is black and white, and that “good” and “bad” aren’t always what you’re told they are. You have to determine that for yourself, and by the end of the film, he learns how to do so. Jojo takes a journey from hate to empathy that characters have been taking since narratives began, but in this setting and with these characters, it feels fresh. The film’s tone acknowledges the spiky nature of such a journey, and this makes the films message of love for our fellow man go down much easier. The film may ask us to laugh at the absurdity of the Nazis, but it takes the plight of the German people very seriously, never shying away from the devastating conditions they had to live in after the Allied Forces claimed victory. The film acknowledges that the end of the war was only the beginning for everyone, not just the Jews. But it lets its main characters, previously separated by the absurdity of hate, share a moment of freedom so charming and perfectly pitched that even amidst all the destruction, you’ll smile right along with them.