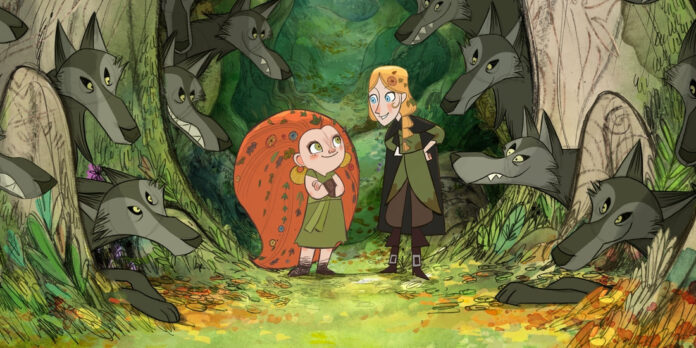 THE STORY – A 17th-century hunter has a change of heart when she travels to Ireland to wipe out the last pack of wolves.

​​​​​​​​There is nothing out there that looks quite like the features of Cartoon Saloon, the Irish animation house that created the Oscar nominees “The Secret of Kells” and “Song of the Sea.” Lushly colored and full of personality, the hand-drawn animation style brings to mind an old but much-loved children’s storybook. When you combine that style with the fairytale-like qualities of their films, rooted in Celtic myth and art, you would expect their films to be purely for kids, but that’s not the case, especially with their latest, the gorgeous and heartfelt “Wolfwalkers.”

Young Robyn Goodfellowe (Honor Kneafsey) has just moved from England to Kilkenny, Ireland, where her hunter father Bill (Sean Bean) has been called by Oliver Cromwell (Simon McBurney) to rid the woods outside of town of the wolves that live there and terrorize the sheep and townsfolk who destroy their home. Though her father forbids her from accompanying him on his dangerous mission, she goes anyway and ends up encountering Mebh (Eva Whittaker), a wild girl raised in the woods by her mother (Maria Doyle Kennedy). Mebh and her mother are “wolfwalkers” – human while awake, wolf while asleep – and Mebh has endless fun teasing the “townie” Robyn for her civilized ways. But by accident, Robyn becomes a wolfwalker herself, and the two become close enough friends that Robyn agrees to help Mebh find her mother, who left as a wolf quite some time ago to find a new home for their wolfpack.

A werewolf film set in the aftermath of Cromwell’s bloody colonization of Ireland may seem like a strange choice for a family film, but directors Tomm Moore and Ross Stewart find a way to make it work. The townfolk’s hatred for the English and Cromwell’s evil nature are both presented from a child’s eye view, and the film never shies away from the horror inherent in the premise. But the storybook quality of the animation keeps everything light and friendly enough that the youngest viewers will never be put off, and the tone of the film is mostly charming and fun, especially in the first act. The vocal performances from Honor Kneafsey and Eva Whittaker as Robyn and Mebh are incredibly endearing; Kneafsey brings modern feminist spunk to Robyn’s desire to be a hunter, and Whittaker has great fun indulging in Mebh’s wild wolf-like ways.

The film comes alive the most in its second half, once Robyn becomes a wolf herself. That’s when the bond between the two girls grows deeper, and when the animation takes its greatest risk, visualizing how wolves can “see” smells in the air and vibrations from the ground. Everything greys out, leaving only outlines of objects and different-colored streaks representing smells, sounds, and the things that make them. The animation of the characters becoming their wolf selves and using their wolfwalker powers is also gorgeous, coming through in shimmering golden curls that create wolf-like shapes when superimposed on the characters. It’s some of the most beautiful 2-D animation you will ever see.

The whole film, actually, is full of splendid animation, in a style we almost never get to see anymore. Taking inspiration (as with their previous films, especially “The Secret of Kells”) from traditional art styles, the town is dark, solid wood-block-style painting while the woods is all bright watercolors, with charcoal-like edges that foreshadow the more fully charcoal style of the “wolf vision” sequences. The wolves themselves become an almost solid mass when they move as a pack, and Mebh is characterized by her giant tuft of blazing orange hair that sometimes engulfs her completely as she bounces around on all fours. The film’s score matches this style with beautiful traditional-sounding Celtic melodies, and the sequence when Robyn first becomes a wolf and meets Mebh in the woods is set to a pretty, catchy song that would surely get awards traction if the film were released by Disney or Pixar.

The strongest part of “Wolfwalkers”, though, is the emotional core of the story. Rather than the friendship between the two girls, the main thread of the film turns out to be the bond between parents and children, and how love and fear can often be two sides of the same coin. The heart-stopping climax of the film is sure to wring any parent’s eyes dry as father, mother, and daughter alike come to understandings and make sacrifices for each other that will have you on the edge of your seat. The relationships between the characters are just as strongly drawn as the animated environments they find themselves in, and when the animation is this gorgeous, that’s high praise indeed.

The style of “Wolfwalkers” may not be what most people want to see in this age of highly realistic-looking computer animation, but those who are willing to give it a try will find themselves enraptured by the film’s unique look and feel, and entranced by the layered story that works on different levels for each age group. Children will have fun with the kiddie horror and friendship between the two girls, while teens and parents will appreciate the social commentary and familial bonds. “Wolfwalkers” manages to have something that everyone can appreciate, all wrapped in a sublimely gorgeous package. It’s a real winner and is as deserving of audiences’ attention as anything by the major studios. Simply put: it’s magical.