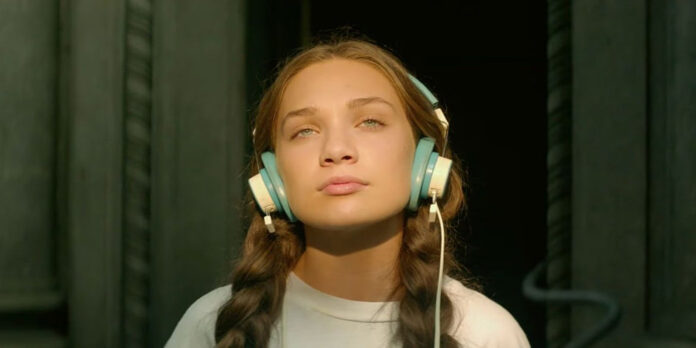 THE STORY – Zu is newly sober when she receives news that she is to become the sole guardian of her half-sister named Music, a young girl on the autism spectrum. The film explores two of Sia’s favorite themes finding your voice and creating family.
​
THE CAST – Kate Hudson, Leslie Odom Jr., Maddie Ziegler, Héctor Elizondo & Mary Kay Place

​​There’s a moment in the latter half of “Music” that is so mind-breaking and fourth wall-shattering that I had to pause the film to collect myself. It came not a moment too soon, as up till that point, my moment-to-moment reactions to Sia’s misguided directorial debut rotated between bewilderment, boredom, and second-hand embarrassment. If you’re like me, I’m sure that sounds enticing in a contrarian way, but I can’t stress enough that there’s little redeeming value in this movie, even in a so-bad-it’s-good way.

Much has been made about the inappropriateness of this film’s portrayal of autism, and from much more qualified writers on the subject than myself. What I will say is that the film’s depiction of its titular character is mishandled at best, offensive at worst. Music (Maddie Ziegler) is a teenage girl with autism who finds herself in the care of her older half sister Zu (Kate Hudson). Music needs to stick to a strict daily schedule, which Zu struggles to fit into her freewheeling lifestyle. We follow along on their adventures as they slowly learn how to live with each other.

“Music” is the kind of film that feels the need to drown its characters in tragedy, as if that’s the only way the audience could ever feel sympathy for them. Zu is recently sober and deals drugs to make ends meet. Add to that a dead grandmother and severe financial troubles and it’s clear that Zu is less of a well-rounded character and is instead more of a collection of traumas, which she mostly brushes off with her easy-going attitude. The tribulations don’t end with her though, as the various neighbors that populate our two heroines’ lives are going through their own struggles, from having trouble affording HIV medication to domestic abuse. All of this is juxtaposed with Music’s sunny daily life, wherein said neighbors help her through her day in ways both big and small. Is the movie maybe saying something about how we hide strife from the world and cover it with small kindnesses and happy moments? I think not, as the film is stuck on Music while simultaneously not giving her any actual agency.

What little characterization Music has is explored in the film’s many musical sequences. Here, Sia’s songwriting and Ziegler’s undeniable dancing abilities are on full display. It’s not entirely consistent or clear if these sequences are meant to reflect Music’s inner life exclusively, a la “Chicago,” or merely stylize the plot points of the story’s real world, like in “La La Land.” They do less to comment on the action and instead feel like colorful Target commercials interrupting the broadcast that makes up the rest of the movie. There are times when some of the musical numbers serve as an oasis from the film’s monotony. Still, with their repetitive choreography and unmemorable songs, they more often distract rather than enlighten.

For the most part, Ziegler dances well in these sequences, which is a nice change of pace from the uncomfortable performance she’s tasked with giving for the rest of the movie. Too often, her physicality strays into caricature. However, it’s hard not to feel bad for Ziegler, as by Sia’s own admission, she was nervous and hesitant to play the role. Her performance seems to instead indicate irresponsibility from Sia and other adults working behind-the-scenes. As Zu, Hudson gives a satisfactory performance. Her character has a host of discomforting personality traits, including constant over-sharing and an occasionally gleeful lack of empathy. It’s not an ideal part for any actor and Hudson gives it about as much charm as can be imagined.

Beyond the predictable main thrust of the storyline, the screenplay takes several odd detours. Most glaring is a seemingly-pointless subplot involving a young neighbor (Beto Calvillo). We spend a good amount of time with him as he wordlessly observes Music from afar. Because we’re not given any context or reason for his voyeurism, it comes across as menacing. He ultimately turns out to be so disconnected from the plot that I thought I had missed a key line of dialogue that explains what exactly is going on here. It’s baffling.

As one of many of a host of quirky scenes that the screenplay explores, the moment, as mentioned earlier that forced me to stop the movie temporarily, simply needs to be talked about. Spoilers ahead, but I would hope that this review so far has served as a warning against watching “Music” rather than inspiring curiosity. Zu and Music have found themselves in the studio of a high-end drug buyer whom Zu hopes to obtain as a customer. It’s evident that this person is some sort of artist, but suddenly Zu spots a distinct hairpiece and asks an assistant, “Is that a Sia wig?” I now know how 1890s audiences that were startled by “Train Pulling Into a Station” must’ve felt. Yes, it turns out this is, in fact, a cameo from the director playing a version of herself who wants to buy drugs, not for her own use, but to send to Haiti as aid (I think this is supposed to be funny). Her appearance punctuates the vanity that seems to have been the driving force behind making this movie.

“Music” is, simply, a lot. Offensive and poorly judged, it intends to be inspirational but merely inspires confusion. It’s a story about autism made only for neurotypical audiences in the same way that “Green Book” is a story about racial struggle pitched nearly exclusively at white people. Enter its candy-colored world at your own peril.