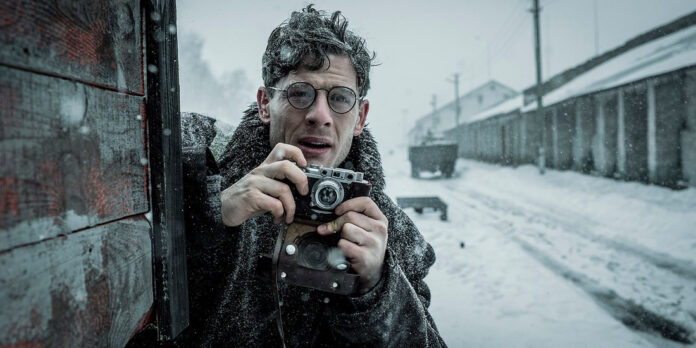 ​​​​​Gareth Jones (played by James Norton) has just been let go from his position as Foreign Affairs Advisor to British Prime Minister David Lloyd George. He was one of the first foreign journalists to fly with Adolf Hitler and Joseph Goebbels, and now he believes there’s something afoot in Stalin’s Soviet Union. He lies to get a visa to Moscow, and once there, he escapes the heavily guarded capital city to explore Ukraine and report on how the revolution of the proletariat is really going. He’s shocked to see the abject poverty and man-made starvation there, but when he tries to report on it, he’s loudly denounced by the cabal of international journalists making their home in Moscow – especially Walter Duranty, who received a Pulitzer for his reporting from the Soviet Union the year before.

The true story dramatized by Agnieszka Holland’s “Mr. Jones” is an incredible one. One that feels especially timely these days when the President attacks news outlets that publish unflattering stories about him and his staff and question his policies. It’s unfortunate, then, that the film decides to make every possible connection to the present day with all the subtlety of a sledgehammer. And if that wasn’t enough, it adds a framing device that makes everything even more laughably obvious, with George Orwell writing his allegorical masterpiece, “Animal Farm”.

Still, there’s good here, especially the long stretch of Jones’s sojourn in the Ukraine, where the washed-out cinematography of Tomasz Naumiuk becomes practically monochromatic. The emphasis on the black peasant winter coats against the bleak, barren snowscapes tells the true story far better than any words ever could. James Norton’s performance as Jones is one of subtle power, accumulating sympathy, and incubating rage as it goes. He’s well-matched by Peter Sarsgaard as Duranty, who’s so oily and slimy he practically slithers like a snake instead of walking. Poor Vanessa Kirby, however, is wasted in a small part that asks nothing of her than to be mysterious at first and suddenly protective of Jones after they inevitably sleep together.

Unsubtle though it may be, “Mr. Jones” sure gets its point across. The denouement of the film is truly infuriating stuff, especially the traditional wall of text about what came next for the real-life people. It’s genuinely stirring to watch this investigative journalist crusade for what he – and we, with the benefit of history – knows is right, and infuriating when we learn of his ultimate fate. It’s also a handsomely mounted production with great production design and an effective score. But unfortunately, it does nothing to stand out amid the many other historical dramas depicting this era and does very little that feels much deeper than the surface. It’s a compelling narrative told in a mostly un-compelling way. This makes the film even more frustrating to watch because, with a story this good, there’s no reason for the film to be this mediocre.