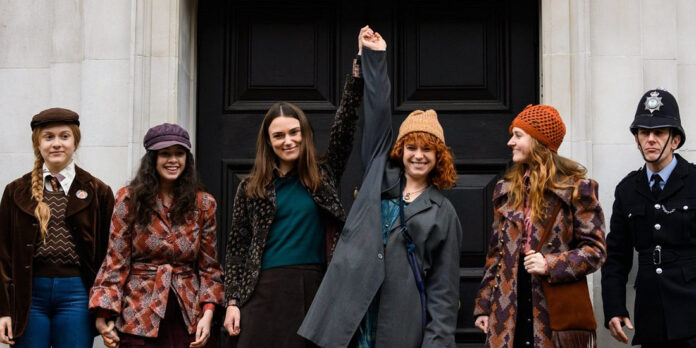 THE STORY – A group of women part of the Women’s Liberation Movement create a plan in order to disrupt the 1970 Miss World beauty competition in London.

​The year is 1970. Sally Alexander (Keira Knightley) makes her way to University College London, hoping to embark on the next chapter of her life as a student. In her admissions interview, she’s judged by a panel of men who are far more interested in her personal life as a divorced single mother than her academic achievements. At the same time as Sally’s interview, Bob Hope goes to Vietnam to address a massive crowd of American troops. He greets the troops with a special guest, Miss World. The troops sit in awe of her beauty as she walks across the stage, judged solely on her appearance. Both Sally and Miss World are miles apart in far different circumstances, but panels of men judge them both.

“Misbehaviour” is the true story of women’s rights activists like Sally Alexander and Jo Robinson (Jessie Buckley) who fought for equal rights through the Women’s Liberation Movement. The women came from different backgrounds. Some were mothers, students, and artists, but all were united in their hopes to see a different future that involved equal rights for women. Their plan to get attention to the cause involved a demonstration at the Miss World pageant in 1970 where their paths would cross with Jennifer Hosten (Gugu Mbatha-Raw). She was a hopeful contestant competing as Miss Grenada, looking to inspire Black girls all over the world. The stage was set as Bob Hope planned to host the show and the world would be watching.

Director Philippa Lowthorpe weaves together the story of the Women’s Liberation Movement and the 1970 Miss World competition. Tackling a plot of this subject matter is a notable thing to do, and “Misbehaviour” feels like a piece of history that should be learned. I didn’t know about the women in this film, and I’m glad that I do now. Unfortunately, Lowthorpe’s direction often feels tonally inconsistent. There are many moments where it feels like two films instead of one. Half of “Misbehaviour” involves watching feminists prepare to dismantle an oppressive patriarchy, while the other half deals with overcoming racism in the Miss World pageant. Both of these issues must be taken seriously, but the way they’re handled is unfocused. I can’t help but feel that Jennifer Hosten and Pearl Jansen (Loreece Harrison) could have had their own movie. The issues they deal with should have been tackled at a much deeper level in the film. There’s undoubtedly racism in the Miss World competition. Yet, the film only scratches the surface of the matter to focus more on the Women’s Liberation Movement.

Speaking of Jennifer Hosten, it’s Mbatha-Raw who’s the standout in “Misbehaviour.” She brings such poise and confidence to the role of Miss Grenada. She’s a real star. Seeing Knightley as Sally Alexander – the mother and activist – is moving. She’s always an excellent character actress and proves that yet again here. In particular, one scene involving an on-air news interview is particularly effective at illustrating the struggle women face daily to be taken seriously. Jessie Buckley turns in a good performance, but there are times her character seems like a one-note “down with the patriarchy” stereotype and little else. It would’ve been nice for her to have a bit more background.

In terms of British historical dramas, “Misbehaviour” is fine. There isn’t anything groundbreaking happening. Strong performances from Mbatha-Raw and Knightley elevate the disjointed script that could have delved deeper with its historical subjects.