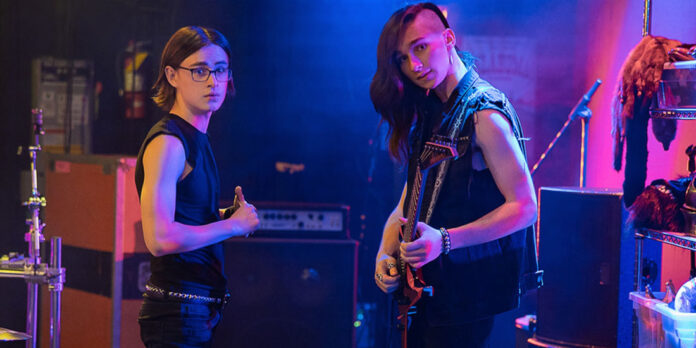 THE STORY – For teenage misfits Hunter and Kevin, the path to glory is clear: Devote themselves to metal. Win Battle of the Bands. And be Worshipped like gods.
​
THE CAST – Joe Manganiello, Jaeden Martell, Brett Gelman, Isis Hainsworth, Sufe Bradshaw, Katie O’Grady, Michelle Mao & Adrian Greensmith

​​Not all movies are great. But not all of them have to be. Some movies just need to be an enjoyable time spent with well-defined characters learning a lesson that the target audience will take to heart because of how it is presented. “Metal Lords” is one of those kinds of movies. On one level, it works perfectly as background noise – the kind of movie that will randomly start playing on Netflix after you’ve finished binging your latest favorite series but before you’ve finished folding your laundry, and you keep it on because it’s light, inoffensive, and you don’t need to pay full attention in order to get what’s happening. On another level, it’s a perfect film for a very specific niche audience to watch repeatedly because of how enjoyable and big-hearted it is.

The story of “Metal Lords” concerns two longtime best friends, Kevin (Jaeden Martell) and Hunter (Adrian Greensmith). They’re both outcasts in high school, but while Kevin does his best to avoid conflict, Hunter often runs towards it, guns blazing. Hunter’s deep connection to heavy metal music has led him to start a band, and he has drafted Kevin to play the drums even though Kevin only plays drums in the school marching band to get out of PE class and doesn’t know metal music at all. When Hunter learns that their school is hosting a battle of the bands, he signs them up, hoping to take down the popular kids and show their classmates what it means to be metal. The only problem? They don’t have a bass player. Enter Emily (Isis Hainsworth), whose foulmouthed fit of pique during marching band practice and talent with the cello leads Kevin to believe she’s the missing piece they need. On the other hand, Hunter thinks that a girl with a cello is the least metal thing ever and would rather move forward with Kevin as a duo. But Kevin and Emily bond anyway, and as Kevin starts to come out of his shell, Hunter starts feeling like he’s losing his best friend. Will the band even survive to compete in the Battle of the Bands, let alone be good enough to win?

“Metal Lords” was written by D.B. Weiss, and it feels deeply personal, a love letter to the glory days of heavy metal and the bands that were gods to so many. That the film doesn’t come across like a relic of another age is something of a miracle, rooted mainly in the screenplay’s ultimate lesson of love and respect for others. That doesn’t seem very metal, but what else could possibly be underneath all the anger and rage of heavy metal music other than a plea to be understood? That’s certainly what’s there for Hunter, anyway, and while Greensmith may be a bit stiff in the way of young actors making their film debut, he does a great job of showing the longing for acceptance that drives most of Hunter’s actions. Martell’s introspective quietness is a great foil for Greensmith’s brashness, and it’s lovely to watch him slowly come into his own over the course of the film. Hainsworth overdoes it a bit as Emily, but she and Martell have nice chemistry with each other, and she provides the film with a spark of energy whenever she’s onscreen. The adults in the film are basically all cameos, but Joe Manganiello is a stand-out as a former metal band member who is an alum of the kids’ school. One particularly great scene features cameos from a number of actual heavy metal legends that only speaks more to how well the film works as a tribute to the music and emotion of heavy metal.

As big-hearted and good-natured as “Metal Lords” is, it can’t help but feel like an inferior version of a story we’ve seen many times before. It runs through numerous coming-of-age tropes, and the pacing occasionally suffers because the story points are so familiar. It’s never a bad time, but there’s little here that adults will be drawn to unless they were also metalheads in their teenage years. It’s probably more for them than for today’s teens, mainly because it doesn’t feel like heavy metal is as big a thing these days as it used to be. Still, those kids/kids-at-heart who do feel alienated from their peers in any way will find a film of relatable characters and an agreeable attitude. It’s perfectly pleasant, but not much more.